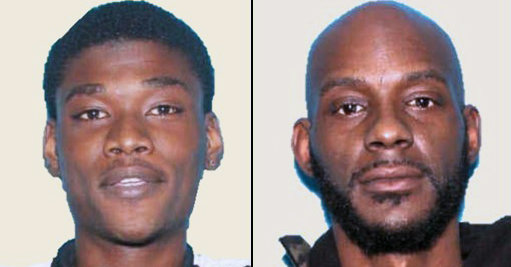 Two fugitives sought in connection with the fatal shooting of a security guard at a Family Dollar store in Michigan over a dispute about a customer not wearing a face mask have been arrested, the authorities said on Friday.

The men, Ramonyea T. Bishop, 23, and his stepfather, Larry E. Teague, 44, were charged in the May 1 shooting death of the security guard, Calvin Munerlyn, at the store in Flint, Mich.

The Genesee County prosecutor, David Leyton, said on Twitter that Mr. Bishop was captured on Friday afternoon in Bay City, Mich., about 50 miles north of Flint. Mr. Teague was taken into custody on Thursday in Houston and was being extradited to Michigan. They both face felony premeditated murder and firearms charges.

Also on Friday, two Flint residents, Laura Ann Mitchell, 44, and Terrance D. Findley, 43, were charged with obstruction of justice, harboring a felon and related charges for their roles in getting Mr. Teague to Houston, Mr. Leyton said.

They rented a vehicle, drove Mr. Teague to Houston, helped him buy clothing there and rented a hotel room for him, Mr. Leyton said. Information that came to the Flint Police Department helped tip off the authorities to the fugitives’ whereabouts, he said.

On Thursday, a sister of Mr. Bishop, Brya S. Bishop, 24, was charged with interfering with efforts to locate Mr. Teague and her brother, Mr. Leyton said on Twitter. She was charged with tampering with evidence, lying to police investigating a violent crime and accessory after the fact to a felony.

The shooting unfolded after Mr. Munerlyn, 43, the security guard, told a customer, Sharmel Teague, that her daughter needed to wear a mask inside the store.

Ms. Teague yelled and spat at him, prompting the security guard to tell her to leave and instructing a cashier not to serve her, the prosecutor said on Monday.

Ms. Teague left the store and called her husband, Mr. Teague, who returned to the store with her son, Mr. Bishop, Mr. Leyton said.

Mark Jankowski, acting U.S. marshal for the Eastern District of Michigan, said, “This senseless act of violence, and the loss of human life over someone doing their job is despicable.”

The family of Mr. Munerlyn held a vigil on Sunday night with cars lining up around the store where the shooting took place.

The shooting came as wearing a face mask — or refusing to — has become a hotly debated issue that has drawn deep divisions and protests.