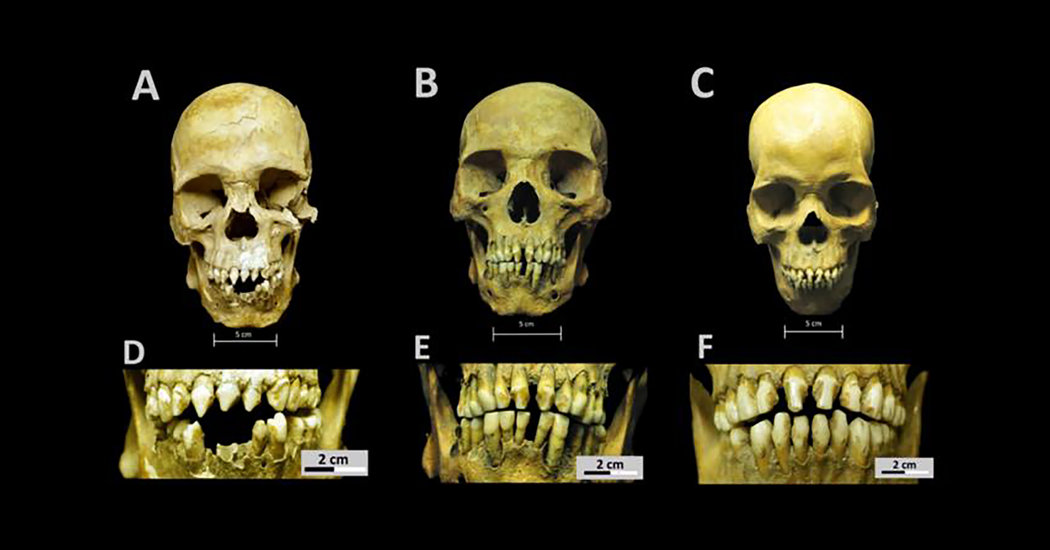 The three skulls were unlike hundreds of others in the 16th-century mass grave uncovered at the San José de los Naturales Royal Hospital in Mexico City. Their front teeth were filed decoratively, perhaps as a ritual custom, unlike those of “los naturales,” the Indigenous people who made up the majority of bodies at the colonial burial site. Archaeologists concluded the three individuals were most likely enslaved Africans, but they needed more evidence to be certain.

The findings, published Thursday in Current Biology, offer a glimpse into these people’s lives before their forced voyages and add insight into the infectious diseases that the trans-Atlantic slave trade may have brought into the New World.

In 1518, King Charles I of Spain, authorized the direct transportation of enslaved people from Africa to the Americas. In 1542, he enacted Las Leyes Nuevas, “The New Laws,” which prohibited the colonists in the Viceroyalty of New Spain from using Indigenous people as slaves. The law liberated thousands of Indigenous laborers, but increased the demand for enslaved Africans, Creoles, mulattoes and other African-descended people to work as servants, cooks, miners and field workers. Between 1518 and 1650, some 120,000 enslaved Africans arrived in what is now Mexico.

Spanish colonists already demanded these groups because they believed they fared well against diseases brought over from Europe such as smallpox, measles and typhoid fever, which — along with the brutal European conquest — had nearly eliminated the Indigenous population.

The San José de los Naturales Royal Hospital was created around 1530 to serve exclusively Indigenous patients, many of whom were dying in smallpox outbreaks. The three Africans were also treated there. When they died, they were buried alongside the Indigenous people. Perhaps all were victims of an epidemic, Mr. Barquera said.

The three individuals’ remains were recovered in 1992 during construction of a new subway in the city. Archaeologists noticed their teeth had decorative filings, which were observed in enslaved Africans in Portugal, and the practice continues today in some sub-Saharan ethnic groups. That led the researchers to suggest the individuals were Africans.

“We don’t know exactly if they were ‘negros esclavos’ or ‘negros libre,’” said Lourdes Márquez Morfín, an archaeologist at the National School of Anthropology and History in Mexico City, referring to the distinction then made between slaves or freemen. But the trauma etched in their skeletons suggests they were slaves.

“One had these gunshots,” said Mr. Barquera, referring to five pieces of buckshot in the man’s chest cavity. “You could see that the bone was stained with a copper greenish pigment because the bullets stayed in the body of this individual until he was dead.”

Some of the men showed signs of nutritional deficiencies, skull and leg fractures and shoulder deformities, suggesting they performed backbreaking work and suffered harsh physical abuse. The men all died between the ages of 25 and 35.

Mr. Barquera and his team removed a molar from each of the three skulls to extract and analyze their DNA. The genetic signatures obtained from the molars showed the three men had their origins in Western or Southern Africa. They also found isotopes on the teeth that further indicated they were all born and grew up outside of Mexico.

“It was hypothesized that maybe they were descendants of Africans and Native Americans or Africans and Europeans, but that’s not the case,” said Mr. Barquera.

The findings provide some of the earliest known examples of those pathogens in human remains in the Americas, as well as the first direct evidence from the early colonial period that pathogens from Africa may have been brought to the Americas, said Johannes Krause of Max-Planck and Mr. Barquera’s co-author. Mr. Krause added it is possible the men caught the diseases while on the overcrowded transoceanic voyages.

“We are always so focused on the introduction of diseases from the Europeans and the Spaniards,” Dr. Krause said, “that I think we underestimated also how much the slave trade and the forceful migration from Africa to the Americas contributed also to the spread of infectious diseases to the New World.”

The paper “does a really nice job of putting together archaeological, osteological, molecular and isotope data to provide insight into the lives of early colonial — likely enslaved Africans,” said Anne Stone, an anthropological geneticist at Arizona State University who was not involved in the research.

Hannes Schroeder, an archaeologist from the University of Copenhagen said the study’s multiple lines of evidence “paint a very detailed picture of the lives of these individuals, their origins and experiences in the Americas, that reminds us once again of the cruelty of the trans-Atlantic slave trade and the biological impact it had on individuals and populations in the New World.”