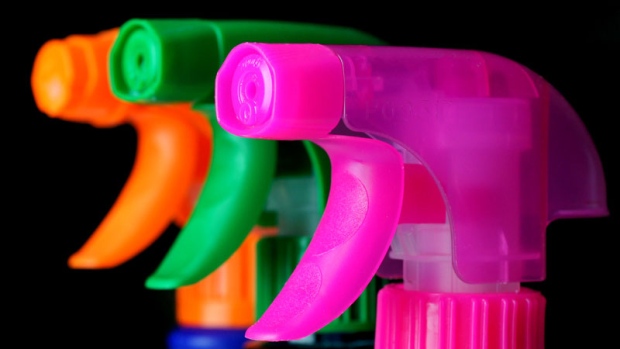 TORONTO — Many more Canadians are accidentally poisoning themselves with cleaning products while trying to disinfect their homes, according to data from poison control centres and Health Canada.

The federal health agency confirmed to CTVNews.ca that calls to poison control centres about hand sanitizers, disinfectants and bleach jumped 103 per cent in March from the same month in 2019.

The centres fielded 985 calls about cleaning products in March, compared to 485 in March 2019.

Health Canada said that it ascribes the surge in incidents to home isolation measures put in place to combat the COVID-19 pandemic, which has resulted in more time at home, including for children, and the increased use and stockpiling of cleaning products.

Looking at figures for February and March combined, cleaning-related poison calls are up 58 per cent. Numbers aren’t yet available for April, when lockdown measures across most of Canada spanned the entire month.

Ontario Poison Control staff were initially surprised about the uptick in calls they were seeing about cleaning products, said medical director Dr. Margaret Thompson. That included more children ingesting hand sanitizers, which contain a substantial amount of alcohol, and people suffering from using bleach and other products improperly.

“We thought it was important to start messaging to the public about this.”

Poison control centres are staffed with expert doctors, nurses and pharmacists and get calls from the public seeking guidance and also from health-care practitioners in emergency rooms, doctors’ offices and clinics looking for advice on treatment.

But poisonings are not reportable incidents in Canada, says Thompson, an emergency room doctor at St. Michael’s Hospital in Toronto, so the data may not be a complete picture of exposure.

When it comes to poison-related calls about cleaning products, exposure is defined as swallowing, getting the product in an eye, inhaling harmful fumes or suffering skin irritation.

Dr. Tom Kosatsky, medical director of environmental health services at the BC Centre for Disease Control, says there are always calls about misuse or ingestion of cleaners, but the 60-per-cent increase in reports coming in to the Drug & Poison Information Centre from mid-March to mid-April were cause for concern.

“People are home, they are worried, and they are trying to kill the virus. But some have been excessive in their use of these products,” he said in a phone interview with CTVNews.ca.

He says the calls in February and March, as concerns about the coronavirus escalated, were mostly about adults and came from mixing bleach with other substances, using it in under-ventilated areas, not diluting it and then having breathing or skin irritation, or adding it to hot water, which causes the bleach to evaporate into the air and then be breathed in.

In a typical week, DPIC receives nine calls related to adults’ exposure to bleach. From March 8 to April 11, the average was 24 calls per week.

But over the last few weeks, Kosatsky says the poison centre has seen more calls about children and for adults who have mistakenly ingested hand sanitizer made by distilleries and breweries.

“They are putting it in bottles that look like liquor bottles and a lot of people have mistakenly drank it.”

Canada’s national data does not include a breakdown according to age or method of exposure, said a spokesperson at Health Canada. But in Quebec, 43 per cent of total calls involved children five and under and just under two-thirds related to ingestion, according to figures provided to CTVNews.ca.

Calls about poisonings related to bleach skyrocketed to 149, a 266-per-cent increase year over year. And hand sanitizer reports climbed 63 per cent.

Of particular concern are poisonings related to people trying to mix their own disinfection cocktails.

Both these gases cause coughing and breathing problems, burning to eyes nose and throat, shortness of breath, and pneumonia. Chlorine gas can burn and blister skin, throat and lungs, and in high levels, can lead to death.

Bleach, which is a mixture water and the chemical sodium hypochlorite that is highly effective at killing most viruses, bacteria and fungus, is also extremely corrosive and toxic. It should only be used with a diluted strength in well-ventilated areas and should never be mixed with anything except cool water.