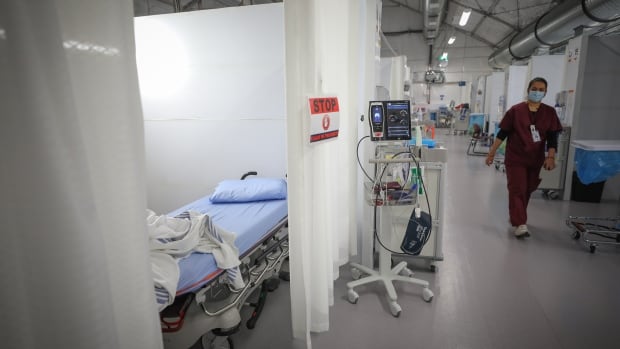 As COVID-19 cases soar in Alberta and hospital capacity is stretched, the province has reached out to the federal government and the Canadian Red Cross for help, CBC News has learned.

A federal source with direct knowledge of the situation says Alberta has asked the federal government and the Red Cross to supply field hospitals to help offset the strain COVID-19 is having on the health-care system.

The source said a formal request has still not been sent by the province, but officials have been discussing in detail the level of support Alberta could receive.

Federal Health Minister Patty Hajdu is scheduled to speak with Alberta Health Minster Tyler Shandro on Wednesday to discuss the requests and what other supports Ottawa can offer the province during the pandemic.

CBC News has reached out to the province for comment, but has not yet received a response.

An official from Public Safety Canada said they have not received any requests for field hospitals from any other provinces or territories.

Alberta continues to set new daily COVID-19 infection records and leads the country in the number of active cases per capita. It has also sometimes led the country in total active cases. For example, on Tuesday, there were 16,628 active cases in Alberta, compared to 14,524 in Ontario — a province with more than three times as many people.

On Tuesday, the province reported 1,307 new cases and a test positivity rate of 8.4 per cent. Alberta has reported more than 1,000 cases each day for nearly two weeks.

There were 479 people in hospital and 97 in ICUs on Tuesday, but the province will update those numbers on Wednesday afternoon at a news conference to be attended by both Premier Jason Kenney and Chief Medical Officer of Health Dr. Deena Hinshaw.

The last time Kenney appeared at a COVID-19 update was on Nov. 24 when he introduced new restrictions on social gatherings, among other measures, in an attempt to stem the rising tide of cases while continuing to focus on the province’s economic health.

He said those restrictions would be revisited on Dec. 15 and stricter measures could be imposed if cases continue to rise.

Critics have called those measures insufficient.

Since then, doctors have warned of overburdened hospitals and ICUs and the province has taken the step of double-bunking some patients in ICU rooms as part of its plans to deal with a surge.

On Nov. 27, Alberta Health Services sent a memo to staff asking them to conserve oxygen supplies as demand increases.