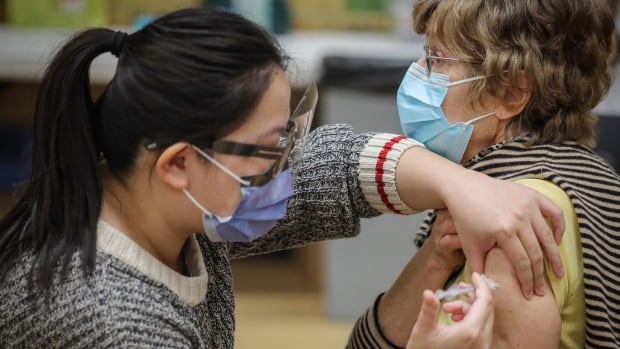 With the province on track to have up to 1,000 COVID-19 patients in hospital by the end of April, Alberta Premier Jason Kenney announced a return to Step 1 restrictions to try to slow the spread of highly contagious variants of the coronavirus.

Facing a growing third wave of the pandemic now expected to be worse than the two that came before, the premier laid out some alarming projections of what could happen over the next few weeks.

“People who right now are contracting COVID today, about five per cent or more of them will show up in hospitals two weeks from now,” Kenney said.

“These are short-term projections and they show that we are on track to hit a weekly average of 2,000 daily cases by the end of this month, based only on transmission that has occurred to week. And we can expect to see up to 1,000 COVID patients in hospital at the end of this month.

“Even at the  height of the second, of the wave, back in December, we topped out at just under 1,900 cases a day. Now we’re well on our way to exceeding that.”

Last week, Kenney urged Albertans to follow the health measures already in place to stop the spread of the virus.

Yet cases have continued to rise sharply over the past week, Kenney said Tuesday, averaging almost 1,000 new cases a day over the long weekend. The surge in variants of concern has also accelerated.

Variant cases went from about 100 a day three weeks ago to 676 on Tuesday, he said, and variants now make up more than 40 per cent of total active cases.

“In the race between variants and the virus, the variants are winning,” the premier said.

In his remarks, Kenney used a chart to illustrate the dangers posed by variants of concern.

The chart showed how one traveller who returned from B.C. spread the virus first through household encounters and social visits, and by the third generation of spread that single case had resulted in 35 illnesses, one death and two people admitted to ICU beds.

“Similar stories are playing out across the province,” Kenney said. “These variants are a real enemy of public health and of lives, and tired though we may be, we cannot stop now. We must defeat these variants.”

The province reported 767 new variant cases and three more deaths, though two of those deaths happened in May and July 2020.

There are currently 328 patients being treated in Alberta hospitals for the illness, including 76 in UCU beds.

The province has worked to expand the capacity of the health-care system to cope with the pandemic, Kenney said, so that hospitals could now accommodate up to 2,400 COVID patients but “at a terrible cost” that would mean cancelling all non-urgent surgeries and many other medical procedures.

“We believe we could accommodate a little over 600 in ICU units,” he said.

“But we believe that based on the current trajectory, if we don’t slow down this curve, that we are set to hit the maximum capacity of our system in mid-May, a great tragedy given that it’s right around mid-May that we’ll begin to achieve effective coverage of vaccines.

“So most importantly, these trends would challenge the health of thousands of Albertans and lead to many, many more preventable deaths, just at the end of this thing.”

Kenney said his job is to make “tough choices” to protect lives and livelihoods.

“The only responsible choice to save lives and protect our health-care system is to take immediate action,” he said. “Alberta will be returning to effectively Step 1 of our four-step ‘path forward’ plan. These measures are designed to buy us time to get enough Albertans vaccinated so we can finally get through this thing.”

If unchecked, the premier said, the third wave would threaten the maximum capacity of the health-care system by May.

With the return to Step 1 restrictions, as of Friday, restaurants, pubs, bars, lounges and cafes can open for outdoor patio dining, takeout, curbside pickup and delivery only.

Patio seating must be limited to a maximum of six people per table, and those at the table must be from the same household or two close contacts for people living alone. Liquor service will end at 10 p.m. and patio dining must close by 11 p.m.

All other changes take place as of midnight.

Retail stores must reduce from 25 per cent capacity to 15 per cent of fire code.

Team sports and group fitness will not be allowed. Places of worship are required to remain at 15 per cent of capacity.

More people can queue for vaccines

Albertans with eligible underlying health conditions who were born in or before 1973 became eligible to book appointments, either online through AHS or by calling Health Link, starting at 8 a.m.

As of Tuesday morning, Albertans born between 1957 and 1966 are eligible to book appointments for the AstraZeneca shot.

Eligible Albertans in this phase can choose to wait to receive a Pfizer or Moderna vaccine when Phase 2D fully launches in May.

The online booking tool has been changed to allow up to four eligible family members to book at the same time at the same clinic, Alberta Health Services said in a statement Monday.

Bookings are being opened by birth year. The first eligible people in group 2B began booking appointments last week.

Additional years will be added as more doses arrive. If supplies hold up, the province aims to vaccinate every adult Albertan by the end of June.

Albertans who became eligible on Tuesday include:

As of Monday, 707,482 vaccine doses had been administered, and 116,198 Albertans had been fully vaccinated with two doses.

On Monday, Alberta reported 887 new cases of COVID-19 and 432 new variant cases, which now account for nearly 40 per cent of active infections in the province.

There were 312 people in hospital, including 76 in intensive care.

But cabinet’s emergency management committee was scheduled to meet on Tuesday morning.

On Monday, Hinshaw provided new details on efforts to contain two outbreaks of the  P1 variant, with cases confirmed in at least four worksites.

The first outbreak involves the north and central health zones and “a large employer with multiple sites across Western Canada,” Hinshaw wrote on Twitter Monday.

She gave no further details about the employer involved, citing an ongoing public health investigation and patient confidentiality.

“These investigations are complex and it’s important that we ensure information is accurate and that anyone at risk is directly contacted before sharing details,” Hinshaw wrote. “We also must balance the public desire for info with protecting patient confidentiality.”

Health officials think the outbreak started with a traveller returning to Alberta from out of province.

A total of 26 cases involved workers from the three sites and their household contacts. Three of those infections are confirmed to be the Brazilian variant known as P1, though Hinshaw said that number was likely to increase as more lab results come in.

There is also an outbreak at a separate workplace in the Calgary zone. As of Monday, five people had been infected and one case had been confirmed as the P1 variant, Hinshaw said.