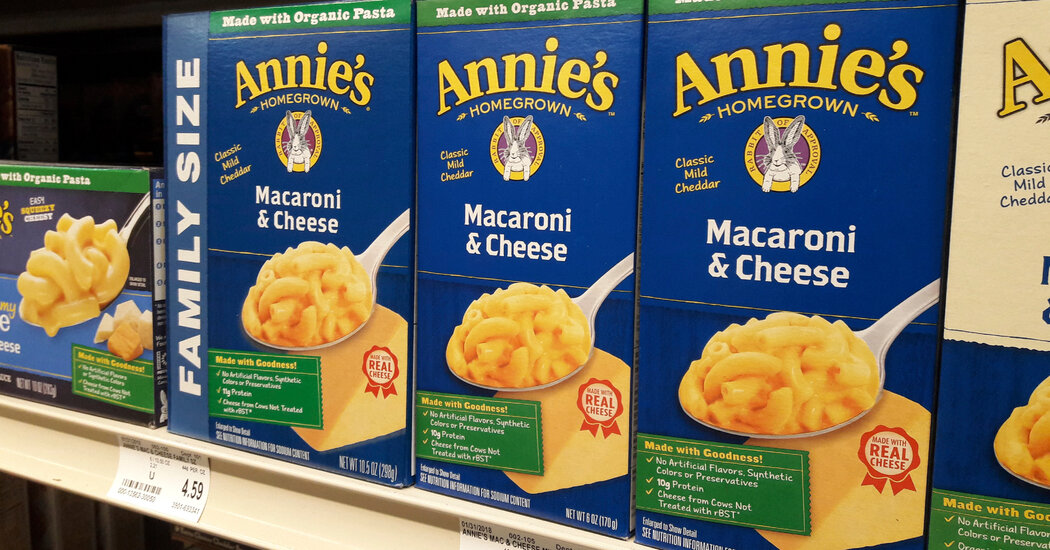 Nearly four years after traces of chemicals believed to cause health problems in children and reproductive issues in adults were found in mass-market macaroni and cheese packets, Annie’s Homegrown has begun working with its suppliers to eliminate the offending material from their food processing equipment.

The presence of the chemicals, called ortho-phthalates, rattled consumers who rely on the food staple, especially parents. Phthalates make rigid plastic more flexible material and are commonly used in tubing and conveyor belts found at food manufacturing plants and in food packaging.

They can disrupt male hormones like testosterone and have been linked by some researchers to learning problems in children. But the plastics industry has argued that food products have been found to contain relatively small amounts of the chemicals, and food regulators have not ruled that they are dangerous to consumers.

The 2017 study, which was funded by environmental advocacy groups and was not published in a peer-reviewed journal, discovered the chemicals in all 10 of the mac and cheese varieties it tested, though the brands were not identified.

Annie’s, known by its cute bunny logo, disclosed its move in a statement on its website, saying the company was working “with our trusted suppliers to eliminate ortho-phthalates that may be present in the packaging material and food processing equipment that produces the cheese and cheese powder in our macaroni and cheese.”

In a statement, a spokeswoman for General Mills, which owns Annie’s, said, “We are committed to learning more to better understand this emerging issue and determine how Annie’s can be a part of the solution.”

The economic and practical reality of trying to root out phthalates, which can be found in many parts of the food manufacturing process, could be daunting.

The chemicals could enter the food in many places along the supply chain, including at the farm, where flexible plastic tubes carry milk from the barn, or in the making of the cardboard container that holds the noodles. The chemicals tend to collect in foods with a high fat content, such as cheese.

Committing to purge phthalates from the manufacturing of one food type raises questions about the chemical content of the myriad other products made with similar flexible plastic equipment.

Still, health advocates applauded General Mills for taking this step with Annie’s, one of its signature brands. General Mills bought Annie’s in 2014, and its popularity has skyrocketed during the pandemic as homebound consumers turn to packaged food.

“People shouldn’t have to eat chemicals in their food when it could make them sick, especially where there are safer alternatives,” said Mike Belliveau, the executive director of Defend Our Health, an environmental and health advocacy group focused on the dangers of phthalates.

Mr. Belliveau’s group, which formerly called itself the Environmental Health Strategy Center, helped fund the study in 2017 that revealed the existence of the chemicals in the food. Since then, he has reached out to giant food companies such as General Mills and Kraft about phthalates. Only General Mills opened a discussion with his group about phasing out the chemicals from its supply chain, he said. (Kraft did not respond to a request for comment for this article.)

“Annie’s has updated the language on their website to our new external commitment,” Lee Anderson, a General Mills executive, wrote to the advocacy group in a December email that was viewed by The New York Times. “We are not planning any additional communications, nor seeking any.”

“While we appreciate that this is important for some consumers, it is not the focus of most of our consumers during these difficult times as we seek to reassure them about the basic availability and value of our products,” the email continued.

Mr. Anderson added that Annie’s had been discussing how to implement the changes with suppliers and was developing a “supplier confirmation tool” but that it would take time to assess its effectiveness.

Other companies have taken steps to limit the chemicals in their packaging, including Taco Bell, which has pledged to remove phthalates from its packaging by 2025. Ahold Delhaize U.S.A., which operates grocery chains such as Stop & Shop and Hannafords, announced a “sustainable chemistry commitment” to restrict phthalates in its private label products.

Maine will begin banning food packages that contain phthalates “in any amount greater than an incidental presence” starting in 2022.

But other than Annie’s, few companies have publicly committed to removing phthalates from the manufacturing process.

The Organic Trade Association is convening a task force this winter to begin looking at how to help its members deal with the issue. “But they need packaging and suppliers along there with them,” said Gwendolyn Wyard, the trade group’s vice president of regulatory and technical affairs.

Phthalates have powerful defenders, including Exxon Mobil, a leading producer of the chemical. The chemical industry dismisses some of the studies into phthalates in food as “bad science” designed to generate alarmist headlines but not grounded by rigorous research.

Kevin Ott, the executive director of the Flexible Vinyl Alliance, a trade group that includes Exxon, said many consumers and advocates are too quick to condemn certain substances. “Any chemical you can’t see, smell or spell has got to be dangerous,” he said.

Mr. Ott criticized how some studies have measured the presence of phthalates in macaroni and cheese in parts per billion. “It’s like a thimble in an Olympic-size swimming pool,” he said.

In 2008, Congress restricted many phthalates from use in children’s toys and directed the Consumer Product Safety Commission to study the effects of several other phthalates.

Today, after all the scrutiny, “phthalates have been basically phased out of toys,” Mr. Ott said. “No astute business person is going to make toys with phthalates.”

Food is a different story. The Food and Drug Administration has studied the presence of phthalates in food packaging and manufacturing equipment. In a paper published in 2018, a group of the agency’s researchers concluded, “There have been no studies to date which show any connection between human dietary exposure to phthalates and adverse health effects.”

But the F.D.A. has not yet officially ruled on the issue, even though researchers say food is a major area of concern.

“Phthalates are coming into our body through our skin, through our nose — we get them from everywhere,” said Shanna Swan, a professor of environmental medicine and public health at the Icahn School of Medicine at Mount Sinai who has studied the chemical’s effect on reproductive health. “But the primary source is food.”

In a statement, an F.D.A. spokeswoman said the agency was currently reviewing two petitions, including one filed by several environmental groups five years ago that asks regulators to restrict phthalates from “food contact” materials.

“Completing our review of these petitions and publishing our response in the Federal Register is a priority for the F.D.A.,” the agency said on Friday.

In a book being published this month, “Count Down,” Dr. Swan argues that a range of chemicals have contributed to a 50 percent decline in sperm counts over the past 40 years and that exposure to certain phthalates may be playing a role in reproductive problems.

“This alarming rate of decline could mean the human race will be unable to reproduce itself if the trend continues,” Dr. Swan writes in the book.

These issues are not caused by “something that is inherently wrong with the human body, as it has evolved over time,” she writes.