You Are Here Home Health News Anxious about returning to pre-pandemic life? Here are tips on how to cope 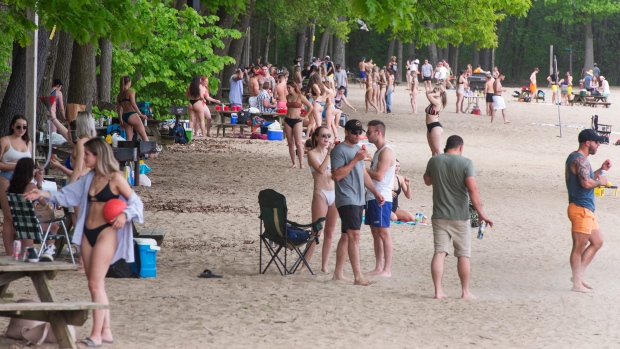 TORONTO — As provincial governments begin to lay the groundwork for lifting restrictions amid falling COVID-19 case rates and increased vaccinations, some Canadians may be feeling anxious about a return to pre-pandemic life.

For some, the psychological toll of the pandemic won’t evaporate as soon as public health officials say it is safe to resume normal activities again.

“Even though it’s positive change and we’re starting to see light at the end of the tunnel, so to speak, I do think that people are going to experience some trepidation about that,” David Dozois, a psychology professor at Western University in London, Ont., told CTVNews.ca during a telephone interview on Friday.

Dozois helped design a survey earlier in the pandemic about rising rates of anxiety and depression.

In the U.S., Dozois said a recent survey by the American Psychological Association showed that nearly half of participants felt uneasy about returning to in-person interactions, regardless of whether they had been vaccinated.

“How’s it going to be standing by the water cooler talking to people at work? When initiating conversations, do we shake hands? Do we not?” Dozois said. “I think there’s a lot of things that we haven’t been doing for quite a while and because of that, there’s a lot of uncertainty that’s going to going to trigger some anxiety for people.”

That anxiety could be even more intense for someone who was particularly affected by the pandemic, such as those who were hospitalized for COVID-19 or knew someone who died from the disease.

“I think so many questions would arise in people’s minds in terms of how long does immunity last? Is there a risk down the road? And I think I think it’s going to be some time before, especially people who were particularly hit by COVID, will readjust,” he said.

Dozois also noted that those with pre-existing anxiety problems may also have a harder time reintegrating back into society after the pandemic is over compared to people who didn’t have those issues before.

Inevitably, there will be varying degrees of anxiety among people as they return to some semblance of normalcy in the days ahead, but Dozois has offered some tips on how they can cope.

LOOK AT THE FACTS

Firstly, Dozois said it’s important for people to really try to think with evidence rather than letting the anxious part of their brains take control.

In order to look at the facts, Dozois encouraged people to follow public health guidelines instead of allowing their anxiety to be the “litmus test” for whether they should go out.

“Look at things in a balanced way and see the risk for what it really is,” he said.

While it’s the likely the scariest, Dozois said the most important thing people can do to overcome anxiety is to face their fears.

“I think it’s very easy to avoid,” he said. “Whenever we’re anxious about anything, avoidance is very effective in reducing anxiety because as soon as we leave a situation, whether it’s fear of dogs or fear of public speaking, as soon as you get out of there, your anxiety goes down.”

However, avoidance in the long-term is dangerous, Dozois said, because all it really does is “add fuel to the fire” and perpetuate the problem.

“What people need to do really is start to face your fears, bit by bit,” he said.

To do this, they can come up with a ladder system to rate their fears from the least scary to the most.

The key to the ladder approach, according to Dozois, is consistency.

“I often talk about facing your fears as frequency, duration, and intensity,” he said. “You want to do it as often as you can, you want to stick it out as long as you can, and you want to increase the intensity bit by bit.”

With respect to duration, Dozois said it doesn’t mean the person has to stick it out until the anxiety starts to dissipate, so long as they attempt to face the fear again at another time.

“The key is just to keep doing it. So we don’t actually even have to stick it out until the anxiety goes, but the best thing to do would be to go back and face that again,” he explained.

Even if the fear isn’t about contracting COVID-19, but related to social anxieties or being embarrassed, Dozois said the same rules apply.

“There are many different kinds of anxieties, but they all work the same way. If you face your fears, systematically, and bit by bit, you’ll overcome them much more quickly,” he said.

Dozois said it is perfectly fine for people to start small when facing their fears and ease their way in to more difficult situations that will cause them more anxiety.

“You don’t have to win every battle to win the war. As long as you keep going back and being consistent, I think that’s really important,” he said.

It’s also a good idea for people to celebrate their successes, no matter how minor they may seem, as they work to overcome their fears, Dozois said.

“Make sure you congratulate yourself and reinforce what you’re doing because it’s hard work to face your fears, but it really does pay off,” he said.

In some cases, a person’s anxiety may be too much to handle on their own and they may need professional help.

“I think when anxiety is so high that it’s causing a lot of distress or it’s interfering with your day-to-day, your work, your school, your interpersonal relationships, that’s the time you might want to think, ‘OK, I need some help with this,’” Dozois said.

He said cognitive behavioural therapy is considered the first line of treatment for people with anxiety disorders and can be very effective.

“It’s a good idea to see a psychologist or another regulated health professional who knows cognitive behavioural therapy and can help you deal with that effective treatment,” he said.

If you or someone you know is in crisis, here are some resources that are available.

If you need immediate assistance call 911 or go to the nearest hospital.