You Are Here Home Health News As Covid Has Become a Red-State Problem, Too, Have Attitudes Changed? 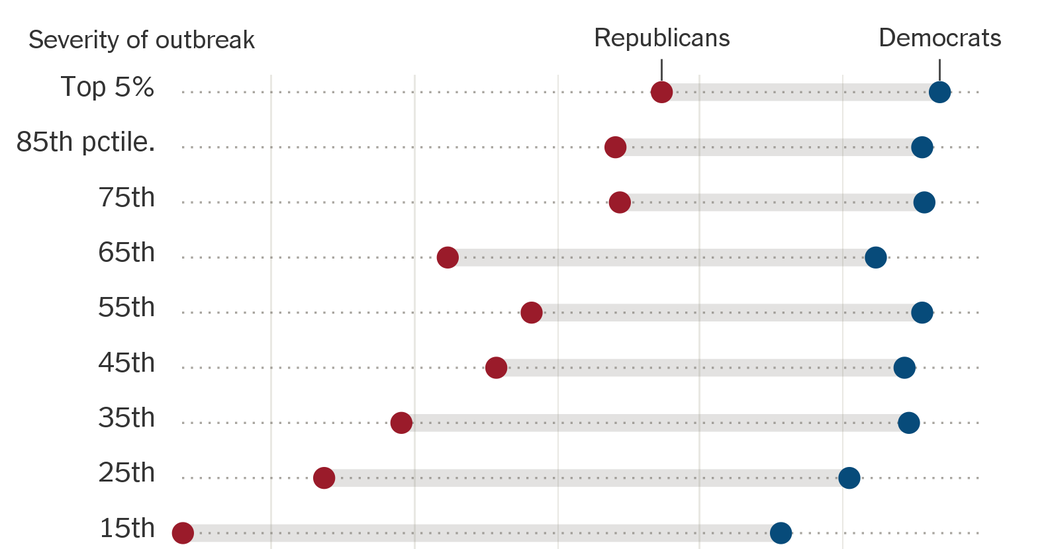 With the coronavirus spreading into red America, policymakers there have been forced to change course.

Some reopening plans have been scuttled; Republican leaders in Washington have broken ranks with President Trump on response policy; and the president himself eventually declared that Americans should wear protective masks.

At the grass-roots level, however, it’s not clear if the partisan differences in how people view the pandemic have changed much at all.

There is some evidence of a narrowing on some fronts, but other survey data suggests that Americans disagree about the severity of the crisis as much today as they did two months ago, when people in Democratic counties were taking the brunt of the damage.

The New York Times recently published a detailed map on geographic variations in the use of face coverings, and here also there is a partisan difference. People who identify as Democrats more consistently report they use face coverings, regardless of whether they live in a county with a high case rate, while for Republicans, self-reported mask use goes up where the crisis is worse.

If the presence of the virus is driving these changes, the infection data shows why.

Through late May, counties that supported President Trump in 2016 accounted for just 26 percent of reported cases and 21 percent of deaths, despite making up 45 percent of the nation’s population.

Moreover, at the state level, where policy is made, the relationship also shifted. Survey data shows Republican governors are more likely to be taking criticism.

Still, it’s less clear how these changes affected perceptions on an individual level.

“Perhaps people who are skeptical about mask-wearing in the abstract might change their minds when the virus is an immediate threat,” he said.

Matthew Gentzkow, a Stanford economist who studies partisan behavior, led an early study based on cellphone records that showed “that areas with more Republicans engage in less social distancing, controlling for other factors including public policies, population density, and local Covid cases and deaths.”

Two months later, he said, there are still differences, but not as large.

“They’re strongly significant in a statistical sense but modest in magnitude,” he said. “People do appear to be behaving differently by party, but it’s not as dramatic as all Republicans are going to the beach and having parties while Democrats stay home.”

It’s still not hard to find pandemic naysayers in conservative-leaning media. And several surveys show that on broader questions, a large difference remains. Even as the virus spreads, Republicans and Democrats differ in their concerns about the health impacts.

Polling data from Civiqs shows Democrats are nearly three times as likely to be concerned about a virus outbreak in their area. Republican response to this question budged only slightly even as virus outbreaks actually multiplied in Republican counties in June and July.

A recent Pew survey found that Republicans and Democrats agreed on one aspect of the pandemic — that it has a severe impact on the economy. But when asked whether the virus posed a major threat to their personal health, or the health of their community, Democrats were twice as likely to say yes.

The authors concluded that the partisan divide over all was about the same as it was in May, before cases and deaths surged into red counties.

The extent to which firsthand experience drives these ideological differences among Americans, and how much the differences in behavior contribute to the virus’s spread, is hard to disentangle with much precision.

But it’s more clear that shifts at the policy level have not come out of nowhere. They’ve aligned with the changing geography of the pandemic.