You Are Here Home Health News As More Deaf People Are Seen on TV, Others Want to Be Heard 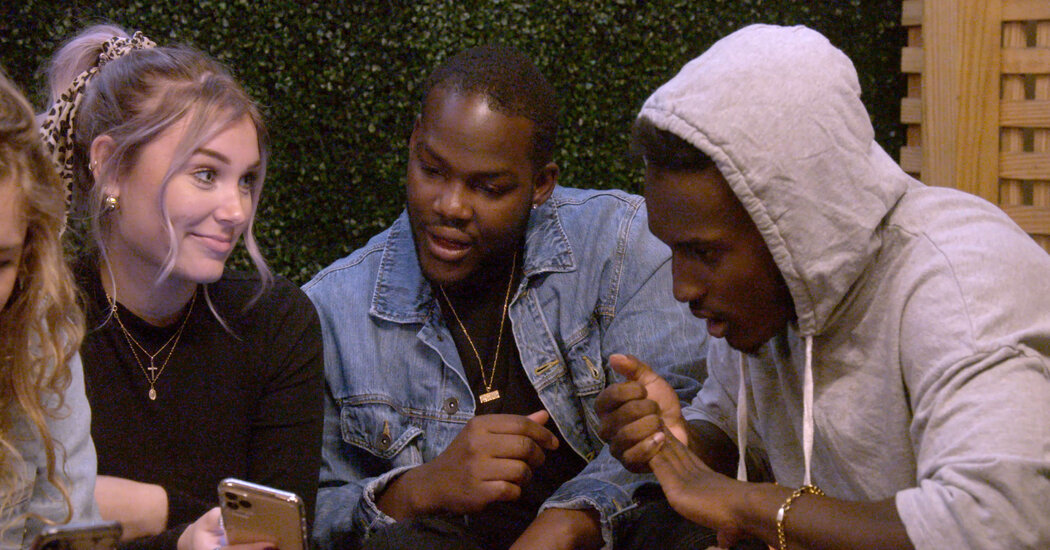 While filming the reality series “Deaf U,” Rodney Burford wasn’t too focused on any effect he and his cochlear implants would have on viewers. “In my own mind I was like, ‘Yo, I’m really on Netflix,’” said the 22-year-old cast member of the show, which zooms in on a group of students at Gallaudet University, the nation’s only liberal arts university devoted to deaf people.

Things changed after the show debuted last fall. Parents of cochlear-implant users started reaching out to say how seeing Burford on the screen had made an impact on their children. “So I would say, no question, I’m proud,” he said in an interview. “I am very proud.”

Many deaf and hard-of-hearing individuals have welcomed the increase in visibility that deafness and hearing loss have enjoyed on TV lately. The current season of “The Bachelor,” on ABC, features Abigail Heringer, who is believed to be the first deaf contestant and cochlear-implant wearer on the show; the actress Angel Theory, who is hard of hearing, currently stars on “Kinderfänger” on Facebook Watch and plays Kelly, a character with hearing loss, on AMC’s “The Walking Dead”; and Disney+ has announced that a Hawkeye series in development would feature a deaf Native American actress, Alaqua Cox, as Echo, a deaf Native American superhero.

But for many who use devices like cochlear implants or hearing aids, onscreen representation still falls short by not reflecting enough of their experiences. Jessica Flores, a comedian in San Francisco who wears cochlear implants and grew up in a hearing environment, speaks English and uses sign language (which she learned later in life). Yet, she pointed out, deaf characters tend to be portrayed onscreen as people who sign and don’t speak.

“Deaf U,” which follows students on campus as they date, party, gossip and flirt, was praised for showing a diversity of experiences, including those of hearing-device users like Burford. But Gallaudet, which is in Washington, as an institution places emphasis on learning sign language and interacting with other people who are deaf and hard of hearing — experiences that not all people with hearing loss have.

“I have not seen really any perfect representation of my type of deafness” on TV, said Alexandra Dean Grossi, who received a diagnosis of profound hearing loss at age 2 and wore hearing aids before switching to cochlear implants as a teenager; she attended hearing schools and, like Flores, had speech therapy, but never learned to sign.

Growing up, the few deaf actors Grossi saw, like the Oscar-winning Marlee Matlin, used sign language and were usually part of the “capital D Deaf” community — a term used by those who embrace deafness as a cultural identity and communicate primarily through American Sign Language. “But I don’t feel that that represents the hard of hearing and cochlear implant experience very well,” said Grossi, a software designer for the IBM accessibility team.

Grossi, who has also worked as a production assistant and junior writer in Hollywood, expressed frustration at the misconceptions around the experiences of those who are deaf and hard of hearing — especially those of people who live primarily in hearing environments.

When she has tried to pitch shows that featured deaf protagonists whose experiences resembled her own, she said she would often get the feedback that the character was not deaf enough. “And I’m like, that’s the whole point,” Grossi said. “You know, there’s so much nuance that you’re missing.”

As a teenager, Flores felt the absence of thoughtful representation. She spent years “being like, ‘Oh, I’m alone,’” she said. “Nobody’s going to understand me,” she remembered thinking.

That is, until Flores came across Amanda, who also wore hearing aids, in a 2008 episode of MTV’s “True Life” documentary series. (Flores has only had cochlear implants for two years.)

Flores teared up, she recalled; seeing Amanda gave her hope and the awareness that there were others like her.

Flores, who had little contact with the “capital D Deaf” community, discovered the power of cultural representation after she started a YouTube channel on which she discusses hearing loss. People started messaging her, sharing how much they identified.

“It was a really emotional moment,” Flores said. Seeing someone you can identify with on TV, she added, can have a similar effect. “That’s like giving us a big hug.”

Ashley Derrington, a blogger for Hearing Like Me, a platform devoted to hearing loss, also experienced that when seeing Heringer on “The Bachelor.”

“She’s one of the first speaking deaf people that I’ve seen in mainstream media, so it highlights that deaf does not just mean sign language,” said Derrington, who is hard of hearing and communicates verbally.

Shoshannah Stern, an actress and writer who grew up in a deaf family, uses hearing aids and communicates verbally, said in an interview, “There are so many stories within the deaf community, so many experiences to be represented.”

Stern said that she wanted to “push back against the expected version” of stories about deaf people as defined by hearing creators. That led to “This Close,” a Sundance Now show in which both lead characters are deaf but have different upbringings, and which shows them interacting with people in both the hearing and the deaf worlds. She created the show with Joshua Feldman, who is also deaf.

When working on “This Close,” Stern said, she felt it was important to incorporate the experiences of its cast members who played the deaf or hard-of-hearing characters, including one who wore cochlear implants.

In search of more representation, others are also taking matters into their own hands. Grossi has written a concept for a dramedy based on her experiences. Flores plans to establish her own company aimed at empowering deaf creators in the industry.

“The idea of control within storytelling is complicated,” noted Stern, who has appeared in the shows “Grey’s Anatomy,” “Weeds” and “Supernatural.” “As an actor you only have so much.” That is what pushed her to start writing in the first place.

For those seeking better on-screen representation of deaf and hard-of-hearing experiences, it’s ultimately about validation. “We are all humans,” Grossi said. “We want to reach out. We want to connect. We want to be heard — no pun intended.”