Obtaining the Campaigns list from the server has failed!
Server response:
CM Ad cahger Server plugin is not active on https://legendarygroup.co/admanager/
You Are Here Home Health News As the Virus Rages, Putin Pushes Russians to Get a (Russian) Vaccine 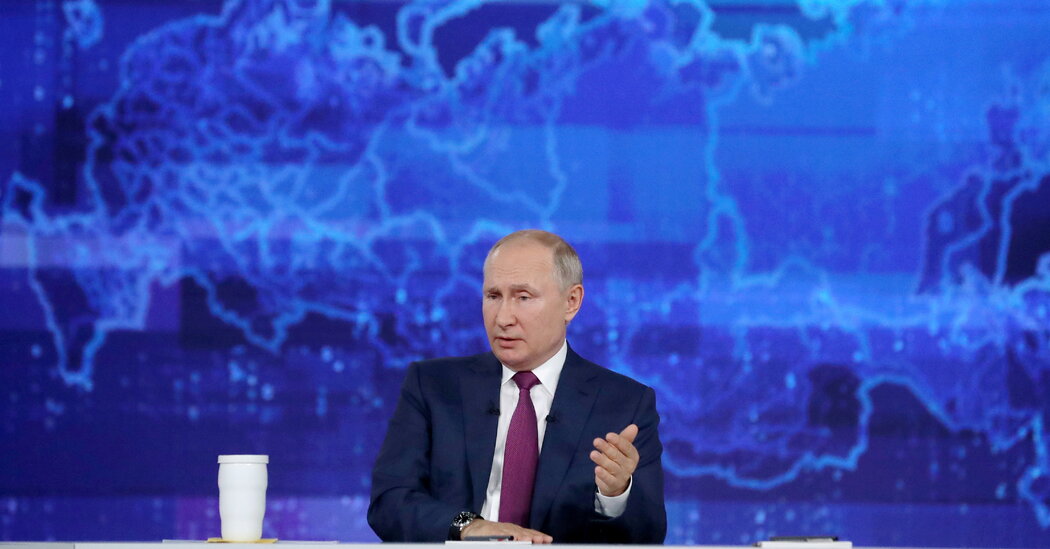 MOSCOW — President Vladimir V. Putin urged Russians to get vaccinated against the coronavirus on Wednesday — his most extensive comments on the matter yet — as his country scrambles to contain a vicious new wave of the illness.

Speaking at his annual televised call-in show, Mr. Putin spent the opening half-hour trying to convince Russians to get one of the country’s four domestically produced shots. It was the latest instance of a marked change in tone about the pandemic from Russian officials, who for months did little to push a vaccine-wary public to get immunized but are now starting to make vaccination mandatory for some groups.

“It’s dangerous, dangerous to your life,” Mr. Putin said of Covid-19. “The vaccine is not dangerous.”

Only 23 million Russians, or about 15 percent of the population, have received at least one vaccine dose, Mr. Putin said. Polls this year by the independent Levada Center showed that some 60 percent of Russians did not want to be vaccinated. Analysts attribute Russians’ hesitancy to a widespread distrust of the authorities combined with a drumbeat of state television reports that described the coronavirus as either mostly defeated or not very dangerous to begin with.

Mr. Putin revealed that he himself had received the Sputnik V vaccine this year — the Kremlin had previously refused to specify which shot he had been given — and that he had experienced a brief fever after the second dose. But his message remained muddled, as he questioned the safety of Covid-19 vaccines in general.

“Thank God we haven’t had tragic situations after vaccinations like after the use of AstraZeneca or Pfizer,” Mr. Putin said.

Mr. Putin spoke just as his handling of the pandemic — long touted by the Kremlin as superior to the approach taken in the West — threatened to turn into a major debacle. While Russia’s Sputnik V vaccine is widely seen as safe and effective, most Russians have been avoiding it and other available, domestically produced shots. As a result, the country is suffering through a harrowing new wave of the pandemic, with the delta variant of the coronavirus spreading fast.

Russia’s biggest cities, Moscow and St. Petersburg, have been reporting more than 100 deaths per day recently, setting records; nationwide, the number of reported new cases per day has doubled to more than 20,000 in recent weeks, with 669 deaths reported on Wednesday. The official toll is likely to be a significant undercount.

Regional officials in Moscow and elsewhere have resisted lockdowns. But, almost certainly with Mr. Putin’s blessing, they have made vaccination mandatory for large groups of people in their regions, such as service workers. That has prompted an outcry from many Kremlin critics and supporters alike.

“I don’t support mandatory vaccination, and continue to have this point of view,” Mr. Putin said, putting the responsibility for such orders on regional officials.

The renewed surge of the coronavirus could derail the Kremlin’s message of competence in comparison to Western dysfunction just as parliamentary elections approach in September. Mr. Putin’s most vocal opponents have already been jailed, exiled or barred from running, but obvious election fraud or a poor showing by his governing United Russia party could still weaken the president’s domestic authority.

Mr. Putin’s annual call-in show, first broadcast in 2001, has turned into a bedrock of how he has communicated with Russians during two decades of rule. More than a million questions were submitted ahead of time by phone, text message and smartphone app, state news media reported. They covered things like the cost of airline tickets, problems with building regulations, illegal logging and high food prices.

The lengthy session affords the president a chance to show that he is in charge, in command of the details of a plethora of issues and concerned about the welfare of regular Russians. It also allows him to blame problems on lower-level officials, while casting himself as the savior of the common citizen.

But it has also underlined the weakness of the top-down system of governance over which Mr. Putin presides. To solve even the most minor issues, it seems, Mr. Putin himself sometimes needs to get involved.

For instance, after a sheep breeder in the Caucasus republic of Ingushetia told Mr. Putin that he had been having trouble finding a plot of land to rent, the president pledged to speak to the region’s governor.

Mr. Putin spent much of the show focused on domestic issues. He shot down online rumors of new fees for farmers, pledging that “no one is planning a tax on livestock.” A woman’s smartphone video from a grocery store showed the high cost of carrots and other staples. Mr. Putin pledged to address the matter, noting that it was a global problem and that “the vegetable harvest is soon, and I hope this will have an impact on prices.”

But Mr. Putin was at his most animated when he was asked about geopolitics. Responding to a question about Ukraine, he repeated his oft-stated contention that Russians and Ukrainians were “one people” and that the country had turned into a puppet of the United States. He rejected another viewer’s idea that last week’s incident surrounding a British warship approaching Crimea could have touched off World War III.

But he warned that any attempt by the West to build up a military presence in Ukraine, Russia’s biggest western neighbor, would pose an existential threat.

“This creates significant problems for us in the security sphere,” Mr. Putin said. “This touches the existential interests of the Russian Federation and the Russian people.”

Some of the questions during the nearly four-hour show came as live phone or video calls, while others were prerecorded videos. Mr. Putin at times appeared confused as to whether or not a question was being asked in real time, talking back at some of the recorded videos. After some technical difficulties about two hours in, the hosts said that the show was coming under a denial-of-service cyberattack.

“Everyone talks about Russian hackers,” one of the hosts quipped.