You Are Here Home Health News At least 150 people had contact with COVID-positive medical professional in N.B. region 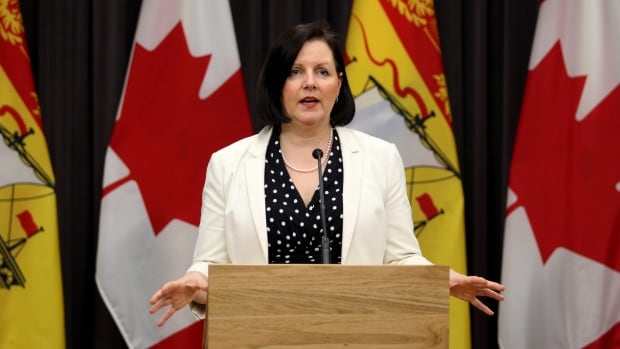 There are three new confirmed cases of COVID-19 in the Campbellton region that are linked to the three other active cases, including another health-care worker, the chief medical officer of health announced on Thursday.

The new cases include a person under 19, someone in their 40s and someone over 90, said Dr. Jennifer Russell.

Based on contact tracing, she expects to see more cases, she said.

The outbreak is “upsetting to everyone, including me,” she said, describing it as “completely preventable.”

All of the cases are linked to a medical professional in his 50s from the Campbellton Regional Hospital who contracted COVID-19 outside the province.

This person, who travelled to Quebec for personal reasons, “was not forthcoming about their reasons for travel upon returning to New Brunswick and they did not self-isolate as a result,” Premier Blaine Higgs said on Wednesday.

After his trip, the man treated patients for two weeks at the Campbellton hospital and possibly other locations, forcing Higgs to order that region back into the orange phase of recovery.

Information about the case has been passed along to the RCMP to determine exactly what took place and whether charges are warranted, said Higgs.

Neither Higgs nor Russell would say whether the person who didn’t self-isolate after travelling was a doctor or in some other health profession. Even fewer details were revealed about the health-care worker added to the cast list on Thursday.

The province moved into the yellow phase last Friday, which allows people to extend their two-household bubble to close family and friends, more businesses to reopen, and more recreation.

The rest of the province will remain in the yellow phase but additional restrictions scheduled to be lifted Friday have been delayed until June 5, said Higgs.

“This will allow us time to see how widespread the outbreak is,” said Higgs.

At least 150 people were exposed to the medical professional, including 50 health-care workers at the Campbellton Regional Hospital and 100 people in the community, said the head of the Vitalité Health Network.

There are “definitely more,” said president and CEO Gilles Lanteigne.

He expects 500 people to be tested within the next couple of days.

The hospital is “basically shut down” until early next week, he said. The ER is closed, all surgeries have been cancelled, no admissions are being accepted and ambulances are being diverted to Bathurst.

Hospital officials are also looking into whether some patients can be sent home early safely.

Lanteigne declined to identify the medical professional or their profession but did confirm it’s a man. Asked whether he is facing any disciplinary action, Lanteigne said he could not talk about an individual case.

“What I can tell you is that any physician or any professional or any health-care worker … has responsibilities that are in relation with their functions. So if anyone transgresses these responsibilities, then it triggers some action.

“So in this situation, or in a situation like this, anyone who has not fulfilled his responsibility, according to the working agreement that we have with him or her, would be subject to disciplinary action.”

​​​​​​Testing centres will be set up Friday through Sunday at the Memorial Civic Centre in Campbellton and the Dalhousie Inch Arran Ice Palace for anyone in the region — whether they’ve had contact with the individual or not, and whether they have symptoms or not.

The 50 identified staff members, including physicians, were tested for the disease Wednesday night and the results are expected later today, said Lanteigne.

The 100 identified community members are expected to be tested today, he said.

Asked Wednesday whether the health-care worker will face charges, Higgs said the case is still under investigation.

Public Health officials are still contact tracing, but Russell said she’s concerned there has already been “significant contact” with the three active cases and more cases will emerge in the days ahead.

The incubation period of the virus is 14 days.

Now the Campbellton region, also known as health Zone 5, is at a higher risk “due to the actions of one irresponsible individual,” Higgs told reporters.

Third case of COVID-19 in Campbellton is a health professional who travelled to Quebec and did not self-isolate on return. 2:51

The two other cases include a person in their 90s and a child who attended two daycares.

None of the individuals are in hospital.

New Brunswickers who have travelled to the Campbellton area or been in close contact with anyone from the area should monitor for symptoms for 14 days, Russell said.

Anyone who develops symptoms should call Tele-Care 811 to get a referral for testing.

As of Wednesday, 23,296 COVID-19 tests have been performed in New Brunswick and 120 people have recovered from the respiratory disease.