You Are Here Home Health News ‘At War Without Ammo’: Doctors Say Shortage of Protective Gear Is Dire 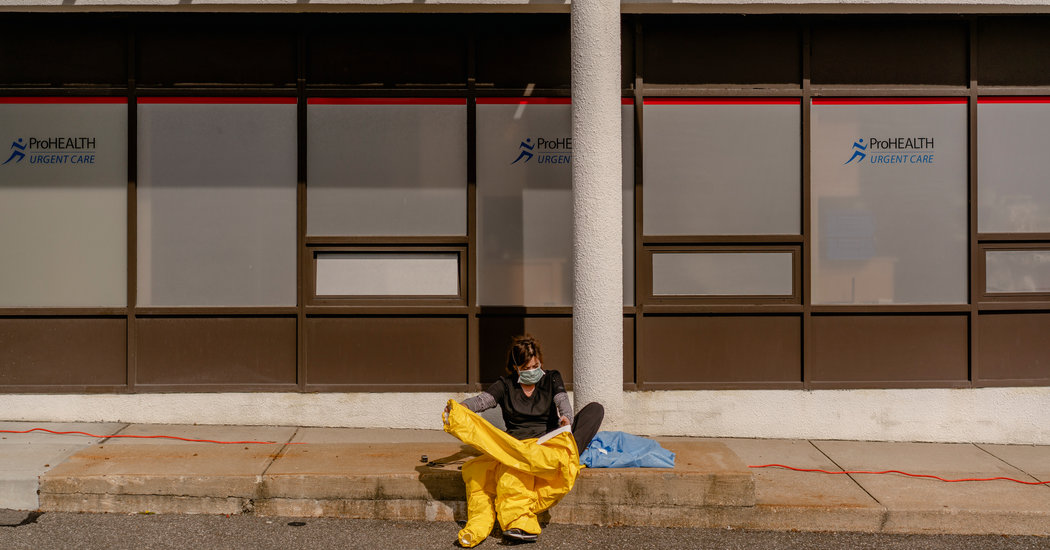 The Open Cities Community Health Center in St. Paul, Minn., is considering shutting its doors, because of a dwindling supply of face masks. Doctors at Barnes Jewish Hospital in St. Louis have been forced to perform invasive procedures with loose fitting surgical masks rather than the tight respirator masks recommended by health agencies. At one Los Angeles emergency room, doctors examining a suspected coronavirus patient were given a box of expired masks. When they tried to secure them to their faces, the elastic bands snapped.

With coronavirus cases soaring, doctors, nurses and other front-line medical workers across the United States are confronting a dire shortage of masks, surgical gowns and eye gear to protect them from the virus.

In interviews, doctors expressed soaring anxiety, fearing they could expose not only themselves to the virus, but their families and others.

“There’s absolutely no way to protect myself,” said Dr. Faezah A. Bux, an anesthesiologist in central Kentucky who in recent days had to intubate several elderly patients in respiratory distress without the N95 masks and protective eye gear recommended by the Centers for Disease Control and Prevention. “Not only can I not protect myself, I can’t protect my patients.”

At a White House briefing on Thursday, President Trump said millions of masks were in production and that the federal government had made efforts to address the shortages, though he did not provide details. But he said it was largely up to governors to deal with the problem.

“The federal governments aren’t supposed to be out there buying vast amounts of items and then shipping,” Mr. Trump said. “You know, we’re not a shipping clerk.”

He also said there were no immediate plans to activate the Defense Production Act, a Korean War-era law that authorizes presidents to take extraordinary action to force American industry to ramp up production of equipment needed for national security.

“We hope we are not going to need it,” he said.

The president’s optimistic statements contrasted starkly with the situation on the ground, particularly in Washington and New York, the states with the largest number of coronavirus cases.

Earlier this week, administrators informed doctors at Memorial Sloan Kettering in Manhattan that they were down to a one-week’s supply of N-95 masks, but working to get more, according to a physician familiar with the situation. Rebecca Bartles, who heads infection prevention efforts for the Providence St. Joseph hospital chain based in Washington, said it was only a matter of days before some of the system’s 51 hospitals and 800 clinics run out of personal protective equipment — a situation that imperils the nation’s ability to respond to a pandemic still in its early stages.

“We are at war with no ammo,” said a surgeon in Fresno, Calif., who said she had no access to even the most basic surgical masks in the outpatient clinic where she sees patients, and has a limited supply of the tight-fitting N95 respirator masks in the operating room. Like many doctors interviewed, she asked not to be quoted by name, worried about retribution from administrators for speaking out.

The C.D.C. says respirator masks can be used for eight hours of continuous or intermittent use and should be discarded after interaction with an infected patient. Many doctors around the country said they are being given one to use as their own, indefinitely, and they spray it down with Lysol or wipe it off, not knowing whether that will help preserve it.

Many doctors and nurses say their fears and frustrations have been compounded by guidance from the C.D.C. that they consider unclear and misleading. Recently the agency changed its guidance to say that regular surgical masks are “an acceptable alternative” when examining or treating a coronavirus patient. The change came given the shortages of N95 masks, which, unlike regular surgical masks, can filter out 95 percent of all airborne particles when used correctly.

The C.D.C. says that N95 masks remain essential when doctors are doing an intubation, which involves inserting a breathing tube down a patient’s throat and is a procedure that can more easily spread disease.

While some infectious disease doctors defend the guidelines — noting that surgical masks and protective eyewear are sufficient for everyday patient exchanges — others argue the new recommendations are borne of political expediency instead of science. The American Nurses Association said the guidelines were creating confusion among its members over how to stay safe.

In an email, the C.D.C. acknowledged the shortages, but did not respond to questions about doctors’ concerns over its guidance.

Howard K. Mell, a spokesman for the American College of Emergency Physicians, said the crisis requires decisive federal action. He urged the White House to ramp up production of medical gear through the Defense Production Act powers, and he called on federal authorities to increase distributions from the Strategic National Stockpile, a repository of critical medical supplies for public health emergencies.

The stockpile has roughly 12 million N95 masks and 30 million surgical masks. The Department of Heath and Human Services, which oversees the stockpile, did not return emails requesting information about the supplies. The department has estimated that the country would need 3.5 billion masks in the event of a pandemic lasting a year.

A cache of several thousand face masks and other gear from the stockpile recently arrived in Oregon and Washington. Officials in both states said it was far less than what they had requested.

“If this is a wartime situation, then now is the time to act,” said Dr. Mell, who is an emergency room doctor in Illinois.

In recent days, Dr. Mell said he felt helpless as he fielded desperate calls from emergency room doctors across the country. On Tuesday, he was surprised to find 10 boxes of N95 masks typically used by construction workers at a local Target store. With certain construction masks temporarily approved for medical use by the F.D.A., he bought the entire supply and is sending half of them to a doctor in the Bronx whose hospital has completely run out.

“Why on God’s green earth can I go to Target and buy these items when so many hospitals are running out?” he asked. “If they are available at Target, there are certainly more sitting at a distribution center somewhere. We need these in our hospitals right now.”

Several large hospital chains said they had adequate supplies for now, though they have taken steps to ration their use. The George Washington University Hospital in Washington, D.C., has told heath care workers they can use a respirator mask five times before discarding it, and it is keeping its supply of masks under lock and key.

Smaller hospitals and nonprofit clinics, especially those that lack centralized supply operations, are moving aggressively to conserve their gear. In an effort to save precious supplies, Chatham Hospital in Siler City, N.C., is only allowing one doctor and one nurse to examine patients with symptoms of respiratory distress.

Some hospitals are employing more heavy-handed tactics. Saint Peter’s Healthcare System in New Jersey on Wednesday warned doctors in an email they could be disciplined for wearing masks when not examining patients.

On Thursday, volunteers with knives, rulers and masking tape gathered at the headquarters of Providence St. Joseph Health to cobble together face shields for the system’s thousands of caregivers. In Oregon, health officials in Multnomah County are calling on the public to donate any rubber gloves, goggles or face masks they might have at home or work. The county, which includes Portland, has little more than a week before critical supplies run out.

“Every pandemic is local so you have to pull on those local strings so we can help each other,” said Julie Sullivan-Springhetti, a health department spokesperson.

But with limited prospects for speedy government intervention, fear and anxiety continue to mount. In recent days, hundreds of medical workers have taken to social media with public pleas for help using the hashtag #GetMePPE.

A doctor at Barnes-Jewish Hospital in St. Louis, who requested anonymity, described how she and her colleagues on Tuesday intubated a trauma patient they later discovered was likely infected with Covid-19. All of them wore simple face masks as they worked just inches from the patient’s face.

“I’m terrified,” she said, her voice cracking with emotion as she ended her shift. “I feel like it’s only a matter of time before I’m infected with this illness.”