You Are Here Home Health News B.1.617: The coronavirus ‘delta variant’ that could spark a fourth wave 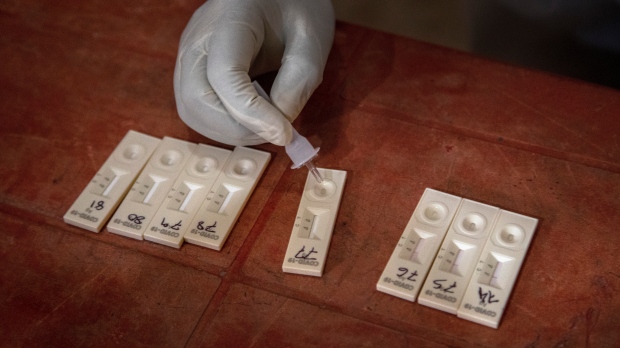 TORONTO — The latest coronavirus variant of concern, which experts say appears to be more transmissible and cause more severe symptoms than other variants, could become the dominant strain of the virus in Ontario within weeks, one region’s top public health official warned Wednesday.

The variant is one of two in the B.1.617 family, which has largely been responsible for the devastating COVID-19 situation in India in recent months.

B.1.617.2, known as the “delta variant” in the World Health Organization’s new naming system, was declared the fourth variant of global concern on May 10. Last week, the organization reported that it has been detected in 60 territories around the world.

That includes Canada, where cases of B.1.617 have been reported in every province except Nova Scotia. In Nunavut, the variant is believed to be behind a COVID-19 outbreak at the Mary River Mine on Baffin Island.

Health officials in Ontario said Monday that there have been 120 positive COVID-19 tests among the 1,000 workers at the remote mine site, and that positive-testing workers had later returned to virtually every corner of Ontario.

Dr. Peter Juni, the scientific director of the Ontario government’s Science Advisory Table, told CTV News Channel on Wednesday that the B.1.617 variants are “probably about 50 per cent more transmissible than” B.1.1.7, the variant identified in the United Kingdom that sparked Canada’s third wave – which itself is significantly more infectious than the strain of SARS-CoV-2 that was originally predominant.

“The virus is definitely upping its game,” he said.

Dr. Lawrence Loh, the medical officer of health for Peel Region in suburban Toronto, said Wednesday at a press conference that B.1.617 cases are “quickly replacing” B.1.117 as the most prevalent form of the virus locally.

He said there are 97 known cases of B.1.617 in Peel Region, including some that had been acquired through community spread, and that modelling data shows an impending surge.

“The trends being observed are concerning,” he told reporters.

“Preliminary data suggests that … within one month, the delta variant will be the dominant strain in our region, with the rest of Ontario weeks behind.”

Loh urged provincial officials to ensure a “cautious reopening” of Ontario to prevent a fourth wave of COVID-19 driven by the delta variant.

He said he has asked the province about increasing the vaccine supply to Peel Region in order to stamp out the B.1.617 surge before it spreads far outside the region.

Juni backed this approach, estimating that Peel Region is “about three weeks ahead” of the rest of Ontario in seeing community spread of the delta variant, due in part to it having ‘the most challenging living conditions, working conditions, et cetera” for stopping the virus from spreading.

“If we protect Peel, then the rest of the province will also benefit,” he said.

Loh raised the example of Bolton, which was until very recently the U.K.’s COVID-19 hot spot due to the delta variant. A mass vaccination drive there was able to reduce the city’s infection rate by more than 10 per cent within days.

Experts say vaccines appear to be effective against B.1.617, and will be key to avoiding a fourth wave in Canada.

Dr. Sumon Chakrabarti, an infectious diseases physician at Trillium Health Partners in Mississauga, Ont., said Wednesday that while the fast-spreading variant may lead to “pockets of infection” in areas with low vaccination rates, the overall progress of Canada’s vaccine rollout should be enough to keep a more severe wave of infections at bay.

“I doubt any rise in this variant is going to cause anything like what we saw a few months ago, with the third wave,” he told CTV News Channel.

“We have to have confidence in these vaccines, because they do make a difference.”