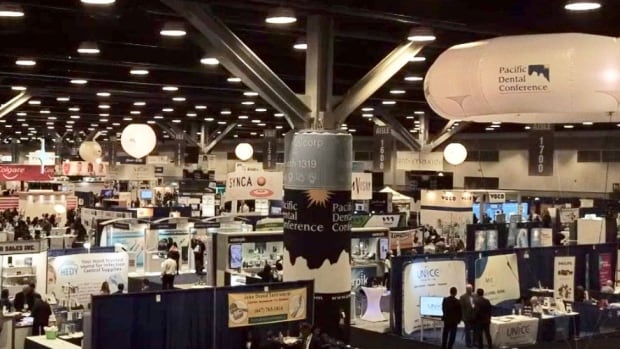 A B.C. dentist who attended a Vancouver conference at the centre of a coronavirus outbreak has died of suspected COVID-19 complications, according to friends and family.

Dr. Denis Vincent, who was in his 60s, died this past weekend at his North Vancouver home, according to a longtime friend, who said he had been in his dentist’s chair for an appointment little more than a week previously.

Vincent’s death is raising questions over why patients at his practice were not alerted over his illness.

He had attended the Pacific Dental Conference at the Vancouver Convention Centre on March 5-7.

The nearly 15,000 people who attended that conference were told on March 16 to self-isolate by the provincial health officer, who confirmed that several cases of COVID-19 had been traced to the event, which is one of the largest of its kind in North America.

Vincent’s friend, Fardad Moayeri, said he had not gone to hospital because he didn’t want to put stress on the health system. People with symptoms of COVID-19 are asked to use a self-assesment tool online, which does not recommend going to the hospital unless the person is experiencing breathing difficulties or other serious health issues.

The Ministry of Health has not yet confirmed the death. The next update from B.C. health officials is expected at 3 p.m. PT.

Moayeri said he’s known Vincent for 21 years, and last saw him when he was at his North Vancouver practice on March 12.

“I am really concerned and confused,” said Moayeri, choking back tears as he described how he learned about his longtime friend’s death on Sunday. Vincent was also his dentist.

“I was totally shocked because I’d seen him on the 12th and he was fine. He was in my mouth. He was in my son’s mouth,” said Moayeri.

Moayeri says Vincent’s family members told him he became progressively ill over the past week. He believes Vincent died in his sleep due to some kind of respiratory distress.

He said he is trying to support Vincent’s two adult sons, who he says are devastated, and he is very concerned about their health. He said both are in self-isolation, and at least one is experiencing COVID-19 symptoms.

Moayeri said he worries that his own family are at risk of developing COVID-19. He’s been left wondering why his friend didn’t reach out when he fell ill.

He is also confused as to why he and other patients who attended the dental office have not been alerted by Vancouver Coastal Health (VCH) of the risk of exposure to the coronavirus that causes COVID-19.

CBC News has contacted VCH but has yet to receive a response.

Moayeri said Vincent was very strict about hygiene, going so far as to spray bleach on his shoes and asking guests to do the same before entering his home.

“He was a bit of a hygiene freak, which is what’s so weird about this,” said Moayeri.

At his March 12 appointment with Vincent, Moayeri said the office assured him that the strict hygiene guidelines they always followed would be in place to ensure patient safety in light of the coronavirus outbreak.

He said Vincent never took off his personal protective wear during the exam.

If you have a COVID-19-related story we should pursue that affects British Columbians, please email us at impact@cbc.ca.