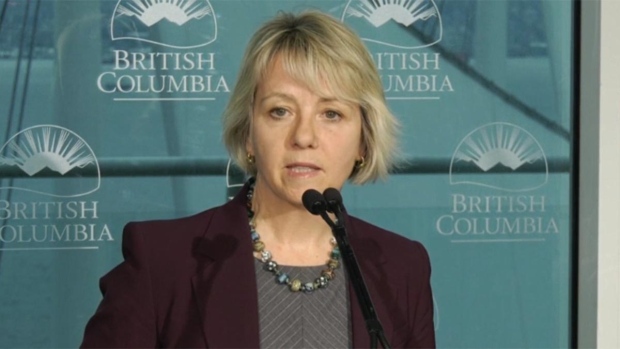 VANCOUVER — Health officials have identified a ninth case of the COVID-19 virus in B.C. as the death toll in neighbouring Washington state continues to climb.

Provincial health officer Dr. Bonnie Henry said the latest COVID-19 patient is a man in his 50s who returned from a trip to Iran last week.

His infection was discovered late Monday night and he’s being kept in isolation at home in the Fraser Health region, which spans from Burnaby to Hope.

“Fraser Health is following up with a small number of close contacts who are also in isolation today and will be actively monitored for the next few weeks,” Henry told reporters at a news conference Tuesday.

Meanwhile, health officials in Washington have announced three more deaths connected to the state’s COVID-19 outbreak, bringing the total to nine. Eight of the fatalities were in King county, which includes Seattle, while one was in Snohomish county.

As the virus continues to spread, Dr. Henry once again urged people to wash their hands regularly and avoid touching their face as much as possible. She also stressed that people who are already experiencing symptoms should keep away from group settings.

“This is an extraordinary time. This is not just our usual influenza season,” she said.

“We all have to be very aware of even mild respiratory symptoms so I’m asking all British Columbians: If you’re sick, stay home.”

Henry even suggested it could be time for people to reconsider common greetings like handshakes and hugs.

“It’s OK to say I’m going to keep my germs to myself,” she said. “When I worked a number of years ago in an Ebola outbreak in Uganda, we would tap feet or tap elbows. It’s making contact with people without spreading your germs.”

While the increasing number of COVID-19 cases and deaths in Washington has put some British Columbians on edge, officials are still confident that travel restrictions at the borders would not help with their containment efforts.

“Those don’t work,” Henry said. “What works is awareness, understanding, asking people to do the right thing – and we find that people, for the most part, do.”

Canada Border Services Agency staff already act as “quarantine officers,” monitoring for illnesses as people head into the province from the U.S., and Henry said they have also started distributing information related to COVID-19, such as who to contact if one should fall ill.

This is a developing story. It will be updated throughout the day.