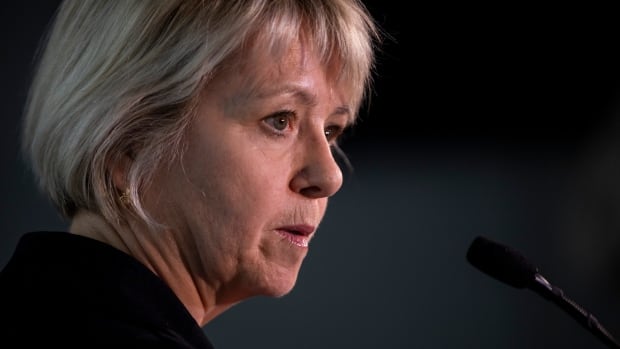 British Columbia’s top doctor says that a second wave of COVID-19 caused by the novel coronavirus is inevitable in Canada, but that the lessons learned over the past few months will help inform future responses.

“The optimist in me would like to think that maybe it will go away, and the virus will mutate and won’t become worse,” said Provincial Health Officer Dr. Bonnie Henry in an interview with Matt Galloway, host of CBC Radio’s The Current.

“But you know what? We’ve never had a pandemic in recorded history that has not had a second wave.”

Henry, who was on the front lines of the country’s SARS outbreak from 2002 to 2003, has led B.C.’s response to the coronavirus outbreak. She has been praised for her response to the pandemic that successfully flattened the curve ahead of many other regions.

B.C. was the second province with a confirmed case of COVID-19, and with strict physical distancing measures, new infections and hospitalizations have steadily decreased.

On Tuesday, the province entered the second phase of its pandemic response with many businesses and public spaces, including restaurants and beaches reopening with restrictions.

“Now is our time to regroup, learn as much as we can over the coming weeks and months, and prepare,” Henry said.

WATCH | ‘We’re not going to get everything right,’ says Henry:

Dr. Bonnie Henry says there might be some confusion about Phase 2 of B.C.’s reopening and it will take some time and patience to iron out.. 1:25

As the country slowly reopens, Henry said that testing will continue to be crucial, particularly when the flu returns in the fall.

“We need to be able to understand the difference between influenza and COVID, and we’ll need to have testing in place to rapidly expand our testing if needed,” she said, adding that contact tracing for diagnosed cases will also play a role.

However, Henry pushed back at the idea of COVID-19 surveillance systems, such as those launched in China and Hong Kong, arguing they’re “probably not that helpful.”

“That one-on-one public health investigation is incredibly important, so if there [are] some applications that help us do that more efficiently, then that’s what we’re looking for.”

With the potential for a second wave, Henry said B.C. is already considering what measures may return — without delivering another blow to the economy.

“What I hope we can do is create a level of safety so that we can get our economy going, our schools going, work going — but not to the level that we were in December [before the virus],” she said.

“We’ll be looking at what were the measures that worked best to prevent transmission, and if we start to see increases in COVID, those are the things that we can put in place rather than the blanket shut everything down as we did before.”

B.C. schools to reopen in June

The most effective measures will be tested as the provincial economy reopens, and starting on June 1, students can voluntarily return to classrooms.

“We want to make sure that there’s not a long period of time where [students] don’t have that direct contact, but we need to do it in a way that’s safe,” Henry said.

While schools have remained open throughout the pandemic for some students, including children of essential workers, they will now be open to all.

In-person attendance is voluntary, and schools will have to follow rigorous cleaning procedures and health guidelines. 2:06

When they reopen next month class sizes will be small, and students will stay with one teacher for the full day.

Several provinces have already announced plans to keep students at home until at least the fall. Henry said that B.C.’s blueprint for schools is what students across the country might expect for the next school year.

“We’ll be learning from the experience that we have in June to make sure that we have things that are working both for the staff and the educators … as well as the students and the family,” she said.

Changes to other sectors, including elder care, will be further off, however.

Long-term care homes, which have faced outbreaks across the country, remain off limits to residents’ relatives in the province.

“As soon as we think it’s safe, we will be allowing family members in, but it won’t be in the same way,” she said. “We won’t be able to have those group experiences right now and probably for a number of weeks or months.”

When asked whether the pandemic would lead to a reckoning for how elder care is handled in this country, Henry said that it has highlighted “challenges” that public health has “recognized for a long time.” She included annual influenza outbreaks and a precarious workforce among the difficulties.

“All of these highlight the vulnerabilities that something like a virus can cause when it gets into a care home and we don’t have those essential pieces in place that support people,” she said.

“I’m hopeful that we will redo how we think about providing care in seniors’ homes.”

Henry said that while the federal government’s role in long-term care needs to be “worked out,” there is “a justification for making seniors’ care — particularly in the long-term care homes that we have — making that part of our whole health-care system.”

Be kind, be safe

Throughout the pandemic, Henry has encouraged British Columbians to “be kind, be calm and be safe.”

“It may sound corny, but I do believe that kindness and support and working together is what will get us through this, particularly things that last as long as an outbreak like this,” she said.

Dr. Bonnie Henry is concerned for families and health workers affected by the coronavirus. 2:11

A return to pre-COVID-19 life remains a long way off, she said, telling Galloway “the types of contact, the things that we did in December,” could remain off limits until a vaccine is developed.

But Henry is hopeful that some of the positive changes that have come out of the pandemic will stick around well beyond COVID-19.

“Those are things that I hope won’t change.”