You Are Here Home Health News B.C. senior in hospital 4 years questions why he can’t live at home with support 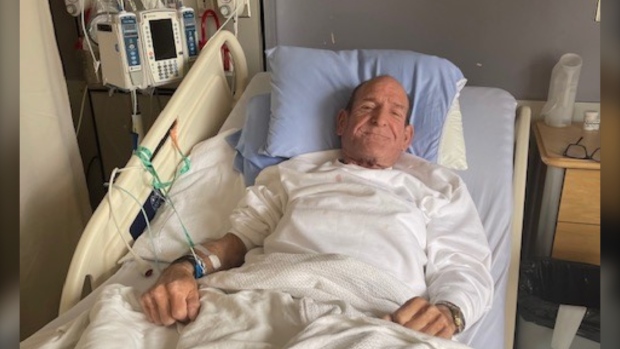 VANCOUVER — He’s been living in a Vancouver hospital for most of the past four years.

And he just wants to go home.

“It’s been, I guess, like being in jail but with no release date ever,” Dave von Holtum said in an interview with CTV News from outside St. Paul’s Hospital.

Von Holtum, who is 65, says his life took a dramatic turn after complications from surgery for a blocked bowel. He now has to be hooked-up to medical equipment for 12 hours a day to get the nutrition he needs to stay alive.

“All of my waste and output comes out through a hole in my abdomen,” he explained.

He recently spent just over a week at George Pearson Centre, a long-term care facility in Vancouver. But he alleges workers didn’t know how to operate his medical equipment.

“When they hooked up the pump, the alarm kept going off saying air in line,” the Vancouver resident said.

“Basically (I) was unable to get the nutrition for approximately eight or nine days until I was so weak that I had to come back to St. Paul’s.”

He says George Pearson is understaffed and that when the pouch that catches his waste would leak on the floor at night, it would stay there for hours.

“At George Pearson, they just throw a towel on the floor and leave it and wait until the next day when housekeeping comes and it’s a terrible infection risk.”

He alleges that if a leak happened in his bed at night, staff would throw down soaker pads until the next morning.

Now the senior has learned he is being transferred back to George Pearson and he doesn’t want to go.

“They take my hope away. They take my will to live away. It’s devastating,” he said through tears.

Vancouver Coastal Health wouldn’t comment on the specifics of the case but said in a statement in part that “…any allegations of insufficient quality of care are investigated.”

The health authority also said “VCH can confirm that staff at George Pearson Centre are trained in Total Parenteral Nutrition (TPN). Any spills are cleaned up promptly for the safety of residents.”

Providence Health Authority, which oversees St. Paul’s Hospital, also wouldn’t comment on the specific case, but said in part that “because TPN is so specialized, a discharge from hospital to the patient’s home is not always possible for safety and quality care reasons, so alternative care settings in the community are sought where care professionals can best support the patient.”

“The money they’ve spent on keeping me here for years is just phenomenal,” von Holtum commented.

CTV News asked the Ministry of Health what the average cost of a daily hospital stay in B.C. is, but it has not provided the information.

Meanwhile, von Holtum says he wants home support so he can live on his own again.

He has previously done this on two occasions, but had infections which landed him back in the hospital. However, he says, he’s developed the same kind of infections while in care.

According to Providence Health, there are currently 68 patients across B.C. on home TPN. It’s estimated there are between 30 and 40 patients receiving acute TPN therapy in hospital.

Von Holtum says health workers have offered to train his 90-year-old mom to hook him up to the equipment, but he doesn’t want that responsibility put on her.

What he does want is a review of his case and the support he needs to gain some freedom back.