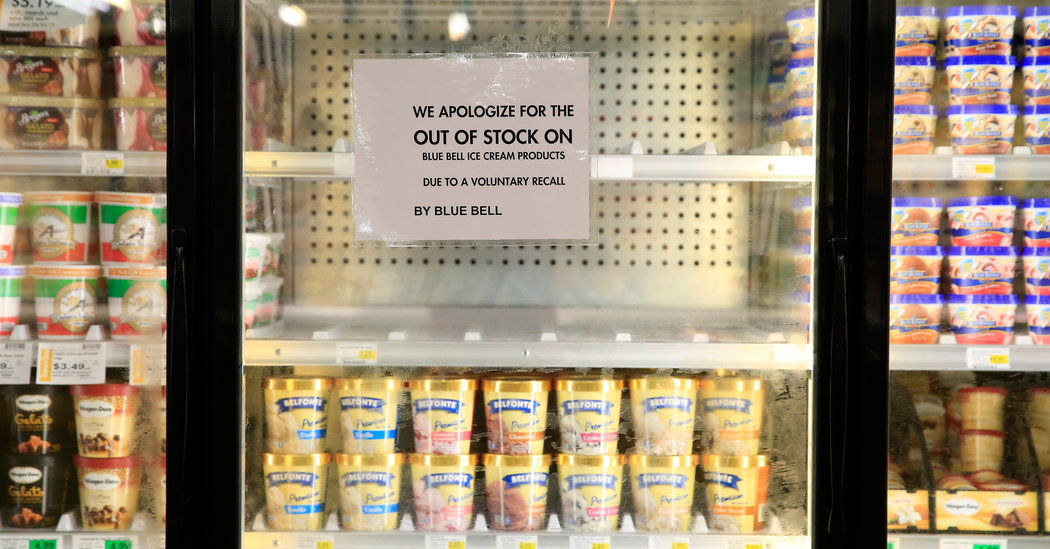 The former chief executive of Blue Bell Creameries was charged with conspiracy in connection with his repeated efforts to cover up what became a deadly outbreak of listeria in some of the company’s products in 2015, federal prosecutors said on Friday.

In addition, the company pleaded guilty to two misdemeanor counts of distributing adulterated ice cream products and agreed to pay a total of $19.4 million in fines, forfeitures and civil payments — the second-largest amount ever paid to resolve a food safety case, officials said. (Chipotle Mexican Grill last month agreed to pay a $25 million fine related to charges stemming from more than 1,100 cases of food-borne illnesses.)

Prosecutors charged that Blue Bell, which is based in Brenham, Texas, about 75 miles northwest of Houston, distributed ice cream products that were manufactured under unsanitary conditions and contaminated with listeria monocytogenes.

The illness caused by the bacteria can be life-threatening. Those at high risk include pregnant women, people 65 and older and those with compromised immune systems.

The former chief executive, Paul Kruse, who was also Blue Bell’s president, directed a scheme to cover up the discovery that some products tested positive for listeria, according to court papers. He directed a company employee to stop a testing program for listeria even after two samples sent to a lab came back positive, court records said.

Further, Mr. Kruse did not order the recall of the affected products despite Blue Bell filing a report to federal regulators that it was recalling them “as quickly as possible,” court papers said.

For a period of more than two months in 2015, Mr. Kruse learned from state and federal officials as well as third-party labs that test samples of at least seven company ice cream products made at two different plants had tested positive for listeria, court papers said.

Yet, prosecutors contend, he repeatedly minimized, ignored or tried to cover up the problem products, which included Blue Bell Great Divide Bar and Chocolate Chip Country Cookie, despite concerns raised by company employees and customers, including a Kansas hospital and a Florida school.

For instance, he directed employees to tell customers that there had been an unspecified issue with a manufacturing machine rather than that samples of the products had tested positive for listeria, officials said.

On Feb. 17, 2015, Mr. Kruse rejected sending a draft news release about two products that tested positive for listeria, the withdrawal of those products and a warning to consumers about the potential health consequences. Mr. Kruse instructed the company executive who brought him the proposed release that it was unnecessary, court papers said.

Chris Flood, a lawyer for Mr. Kruse, said on Friday that his client was innocent of the charges.

“We have confidence that a Texas jury will see it that way and let Blue Bell get back to making the best ice cream in America,” he said. “We look forward to telling the whole story of how my client along with all of the other employees of Blue Bell did the best they could with the information they had at the time.”

No date has been set for Mr. Kruse’s initial appearance in court.

Federal inspections at Texas and Oklahoma plants in 2015 revealed sanitation issues, including problems with the hot water supply needed to properly clean equipment and deteriorating conditions that could lead to unsanitary circumstances, prosecutors with the United States Attorney’s Office for the Western District of Texas said.

The Food and Drug Administration, the C.D.C. and the company issued recall notices on March 13, 2015. Later tests confirmed contamination in a product made at a Blue Bell plant in Broken Arrow, Okla., which led to a second recall announcement on March 23, 2015.

“We faced a situation our company had never dealt with before, and our agreement with the government reflects that we should have handled many things differently and better,” Blue Bell said in a statement on Friday. “We apologize to everyone who was impacted, including our customers, our employees and the communities where we live and work.”

“Today we are a new, different and better Blue Bell,” the statement added, noting that it revamped its procedures and brought in independent food safety experts and consultants “to ensure transparency and accountability.”