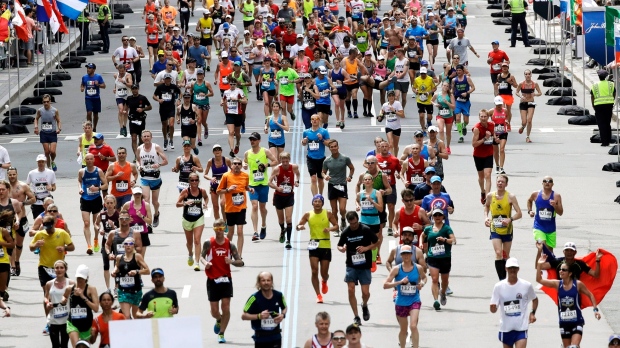 BOSTON — The Boston Marathon, the world’s most celebrated footrace, was postponed until Sept. 14 because of the coronavirus pandemic.

Boston Mayor Marty Walsh announced the decision Friday. The Boston Athletic Association, which oversees the marathon, had held off deciding the fate of the April 20 race even as other high-profile sports events were cancelled or postponed around the globe.

But pressure had mounted in recent weeks from officials in Boston and the seven cities and towns along the 26.2-mile (42.2-kilometre) course. Some had expressed worries not only for the health of the 31,000 registered runners but also the estimated 1 million spectators who traditionally line the route, giving athletes hand slaps and even kisses as they pass.

Walsh, making the announcement with race organizers and other officials outside City Hall, drew on the city’s rallying cry in the aftermath of the bombings that killed three and injured scores of others at the marathon finish line in 2013.

“We’ve shown before that whatever the challenge to our marathon and to our city, we are Boston Strong,” he said. “The marathon is Boston. It connects us. It reflects us. It brings out our community spirit and our resiliency.”

Walsh acknowledged postponing the race is a big undertaking, but that cancelling it outright would have been even more harmful. The marathon pumps $211 million a year into the city’s economy and about $40 million charities, he said.

And there was never a consideration to run the race with a limited field of elite runners, Walsh added.Friday

This month’s Tokyo Marathon was expected to have 38,000 participants but was limited to elite runners due to concerns over the outbreak of the virus in Japan. And spectators at the Los Angeles Marathon, held earlier this month, were advised to practice social distancing.

For most people, the new coronavirus causes only mild or moderate symptoms, such as fever and cough. For some, especially older adults and people with existing health problems, it can cause more severe illness, including pneumonia, and death.

The vast majority of people recover from the new virus. According to the World Health Organization, people with mild illness recover in about two weeks, while those with more severe illness may take three to six weeks to recover.

The Boston Marathon has never been cancelled outright since its first running in 1897, though there was a de facto cancellation in 1918, when the end of World War I and a global influenza pandemic prompted organizers to switch to a relay race format.

Until Friday, not even the Great Depression or ferocious storms had interrupted the 124-year-old race, a bucket list quest for runners worldwide. About a third of this year’s field were from outside the U.S.

The race is also a highlight of Patriots’ Day, a state holiday commemorating the first battles of the Revolutionary War, which took place in Massachusetts, noted Gov. Charlie Baker, who joined Walsh at City Hall on Friday.

“It won’t look right on the calendar,” he said. “But it’s the right thing to do.”

Baker has already declared a state of emergency, and race organizers had said they were in close contact with the federal Centers for Disease Control and Prevention and the World Health Organization.

Walsh stressed that people shouldn’t attempt to run the race course in April when the marathon would have taken place, as some in the running community have suggested.

“We want to make sure that we keep people safe,” he said.

Philip Marcelo and Mark Pratt in Boston contributed to this story. The Associated Press receives support for health and science coverage from the Howard Hughes Medical Institute’s Department of Science Education. The AP is solely responsible for all content.