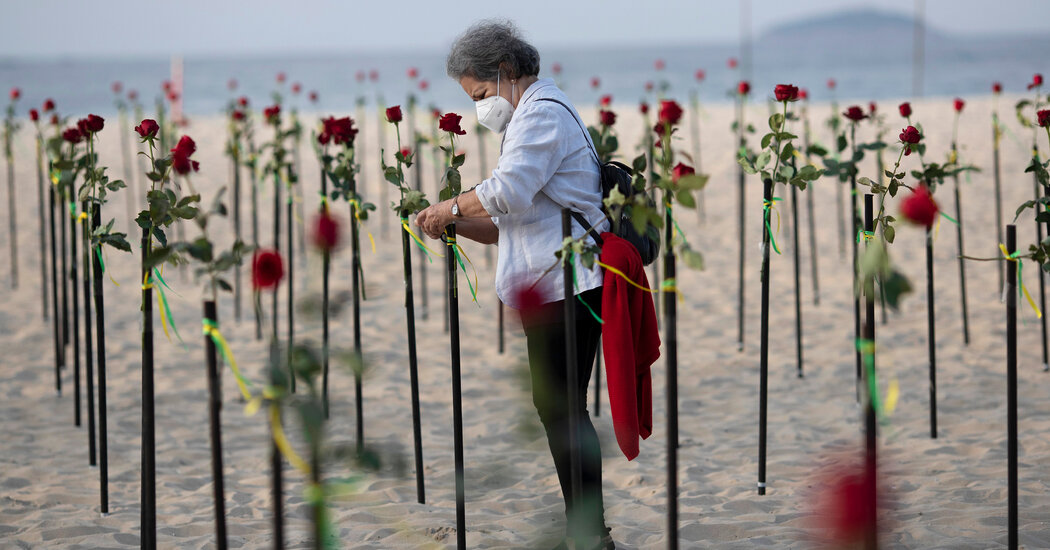 Nearly 18 million people have been infected so far, and the country is averaging almost 73,000 new cases and some 2,000 deaths a day, according to official data. But many experts believe the numbers understate the true scope of the country’s epidemic, as they do in India.

Brazil’s president, Jair Bolsonaro, has been heavily criticized for dismissing the threat posed by the virus, despite contracting it himself last year. On Saturday, thousands of people protested his response to the pandemic, including his resistance to mask-wearing edicts and the slow rollout of vaccines, according to Reuters. Only 11 percent of residents are believed to be fully vaccinated.

A severe drought has also gripped the country, the worst in at least 91 years, and experts say a terrible fire season may further complicate the country’s struggle to manage the virus. The smoke could even aggravate cases of Covid-19, by increasing the inflammation in the lungs.

“It’s a situation that’s dangerous,” said Dr. Aljerry Rêgo, a professor and director of a Covid facility in the Amazon state of Amapá. “And the biggest risk, of course, is overwhelming the public health system even further, which is already precarious in the Amazon.”

In recent testimony before a legislative committee, Brazil’s former health ministers described Mr. Bolsonaro’s befuddling belief that an anti-malaria drug was effective against Covid-19, and an executive at Pfizer said that the company offered millions of doses of its Covid-19 vaccine to Brazil last year — but received no response from the government for months.

Mr. Bolsonaro shrugged off the revelations. Last month, his government announced that Brazil would host the Copa America soccer tournament later this year, after Argentina decided it would be irresponsible to do so while the virus continued to spread.

On Friday, officials reported that 82 people connected with the tournament had contracted Covid-19, according to The Associated Press. Brazil’s health ministry said in a statement that 37 players and staffers of the 10 tournament teams infected, along with 45 workers.

U.S. birth rates rose slightly in 2021 after a steep drop in the first year of the pandemic, CDC data shows