You Are Here Home Health News British scientists say the next dangerous COVID-19 variant is likely already out there. We just don’t know it yet 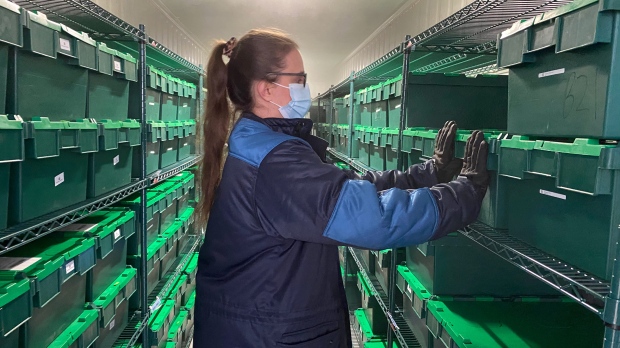 Almost a month into a third nationwide lockdown, most of England seems to be in hibernation: stores are shuttered, high streets are deserted, and trains are almost empty. But in one small village in the countryside near Cambridge, in eastern England, there is a hive of activity.

Dressed in white lab coats and surgical masks, staff here scurry from machine to machine — robots and giant computers that are so heavy, they’re placed on solid steel plates to support their weight.

The staff at the Sanger Institute are much more than essential workers — right now, they’re doing some of the most important work on Earth: genetically sequencing the coronavirus. Internally, it’s called “Project Heron.”

The labour-intensive project, involving hundreds of people, is being done just down the road from the Cambridge pub that Francis Crick walked into in 1953 to declare he’d “found the secret of life” — the structure of DNA. Today that discovery is allowing scientists to spot dangerous mutations in the genetic code of coronavirus that could make the pandemic much worse than it already is.

Every day, vans arrive at the Sanger Institute carrying crates full of virus samples from around the U.K. The green crates are loaded into an industrial-sized walk-in freezer, set up in the parking lot.

By this point, there are no more cotton swabs. The samples — both positive and negative — are in a solution of what’s left over after initial testing. The scientists don’t need much.

Inside the lab, a robot is programmed to pluck only the positive samples from a small, plastic muffin tin-like plate and consolidate them onto a separate tray which is sealed by hand. Hundreds of samples end up consolidated into a single vial. In another lab, chemicals are added, and shaken by a small machine, then pressed thin between two pieces of glass. The glass plate is put into one of the giant sequencers, a loudly humming machine that looks like a high-tech photocopier.

Fifteen hours later, the computer spits out so much genetic data that entire server farms have been built off-site to house it. From start to finish, the process takes about five days. Around 10,000 samples are sequenced each week in this lab alone — around a quarter of the total number sequenced globally.

Then comes the hard part: Combing through all that data.

“We’re looking for mutations that may allow the virus to either be more transmissible or to cause more severe disease, and particularly now that vaccines are beginning to be rolled out globally, we’re looking potentially for mutations that we think might affect the ability of the vaccines to protect people,” said Ewan Harrison, a microbiologist who is helping coordinate the network of scientists working on the COVID-19 genomics operation in the U.K.

Harrison explains that if you sequence enough of the population you can see how the virus has moved through the community and where there have been groups of infections — including super-spreader events. “That’s really powerful … that’s really at the heart of what viral sequencing is for,” he said.

Harrison has played a leading role in the COVID-19 Genomics U.K. Consortium (COG-UK) a team of hundreds of scientists at universities and labs across the country that sprang up at the start of the pandemic, working in unison to create and make sense of the genetic data being sequenced.

Less than two months ago, that network of scientists and Britain’s growing mountain of genetic data helped to identify and trace the spread of the variant that has now become dominant in the U.K. It was first spotted in Kent, a rural county that also has some of the most deprived communities in southeast England.

And yet, daily case counts continued to climb across the county, even while they were falling in most other parts of the U.K., which was under national lockdown.

They found the culprit in the U.K.’s genomic database, which at the time covered about one in every 10 positive COVID-19 samples in the country.

The rogue strain of the virus, called B.1.1.7, had been circulating in Kent since at least September. It spreads 30-70% more easily than the original virus, according to Britain’s chief scientific adviser Patrick Vallance.

It didn’t take long for B.1.1.7 to be detected in the capital, and throughout the country. It has now been spotted in at least 70 countries, and most U.S. states. The CDC says it could become the dominant strain of coronavirus in the U.S. by March.

Cambridge University Professor Ravi Gupta said that, based on how quickly it spread in the U.K., “It’s probable that the same thing will happen in the U.S.”

Inside his lab, Gupta showed CNN a “phylogenetic family tree” — the equivalent of ancestry.com for COVID-19. On this tree, B.1.1.7 looks like a second cousin, twice removed, from the original coronavirus first identified in Wuhan, China. The genetic difference is 23 mutations, but the real oddity is that B.1.1.7 has so few close “relatives.”

“We found very few — virtually no sequences that are highly related to the B.1.1.7 variant. In other words, it popped out of nowhere,” said Gupta.

Scientists are unlikely to ever find “patient zero” of the new variant, but they have a theory.

Last year Gupta was studying a COVID-19 patient with a compromised immune system who couldn’t shake the virus for more than three months. Inside a body that couldn’t fight back, the virus had time to mutate much quicker than it would being passed from person to person in the population.

Gupta compared the virus of his patient, who eventually died, to the sequencing database and found that there was a virus already circulating that shared one key mutation with his patient: B.1.1.7.

“It was really striking to see,” he said. The patient didn’t have B.1.1.7, but the volume of mutations within their body illustrated for Gupta that it’s “very, very likely” that if there was a B.1.1.7 “patient zero” they were an immunocompromised person. Harrison thinks so too.

VACCINES FOR A CHANGING VIRUS

Gupta’s pre-published lab research indicates the Pfizer/BioNTech vaccine is still effective in beating the U.K. variant after one dose, though slightly less so in blood taken from patients aged over 80. Other studies on different vaccines have shown similar results. But the same may not be true for every variant that comes along.

There are already concerns about decreased vaccine effectiveness on the South African variant, prompting vaccine makers like Pfizer and Moderna to start working on booster shots to keep up with a changing virus.

Just this week, Public Health England said a small sample of B.1.1.7 cases from the U.K. have been found to contain a new mutation also present in the South African variant. Early lab research suggests the so-called “escape mutant” may help the virus evade antibodies produced by vaccines — potentially making them less effective.

Gupta thinks the concern over these variants is well deserved. “These viruses are already on their way to becoming more resistant to the immune system and to vaccines,” he said.

The U.K. variant, like others, has changes on the so-called “spike protein,” the part of the virus that helps it invade a human cell. Scientists think this could be why it’s more transmissible than earlier strains and also causes worries for the vaccine, as those currently developed work using the spike protein.

Before vaccines can be adapted to the changing virus, samples need to be sequenced. The Sanger Institute, together with 16 smaller British labs, account for around half the world’s total sequencing effort. Many countries don’t have the ability to sequence any COVID-19 samples at all.

“We talk about the U.K. variant and South African variant and Brazil variant — but the irony is it’s probably just that these are the countries that have advanced sequencing capacity and [the variants] may well have emerged elsewhere but we simply won’t know it. And there may be others,” said Villar.

Gupta and Harrison believe it’s likely that there are already dangerous variants of the virus spreading in countries where scientists won’t be able to spot new variants as they arise.

“These immunocompromised individuals are scattered around the world,” said Gupta. “So, it is very likely there are undetected variants out there.”

The British government has announced plans to expand its sequencing work to countries that can’t do their own. The exact details are still being ironed out.

“It’s trying to find those countries that don’t have the capacity to sequence themselves, [or have] very low capacity, to improve our global awareness of mutations that could have absolutely devastating public health impacts,” said Villar. “Obviously that brings incredible benefits globally but also protects the U.K. from variants that may endanger the public here too.”

Villar says he is sure that the Sanger Institute will be involved in the effort and that the British government is planning a “significant increase in the capacity of both sequencing and analysis” to help in the global fight against COVID-19.

Harrison isn’t sure exactly what his role will be, or when he’ll go back to his old job. A year ago, he was studying why people are colonized with methicillin-resistant Staphylococcus aureus (MRSA) — a dangerous, antibiotic resistant strain of bacteria — before being diverted to “Project Heron.”

Others were sequencing human genomes, plants, parasites or cancer cells. All of that has been put on hold for something much more urgent.

“It’s been a long, long year,” he said. “But you know, I think that we’re all very proud of what we’ve achieved in terms of the genomics program.”