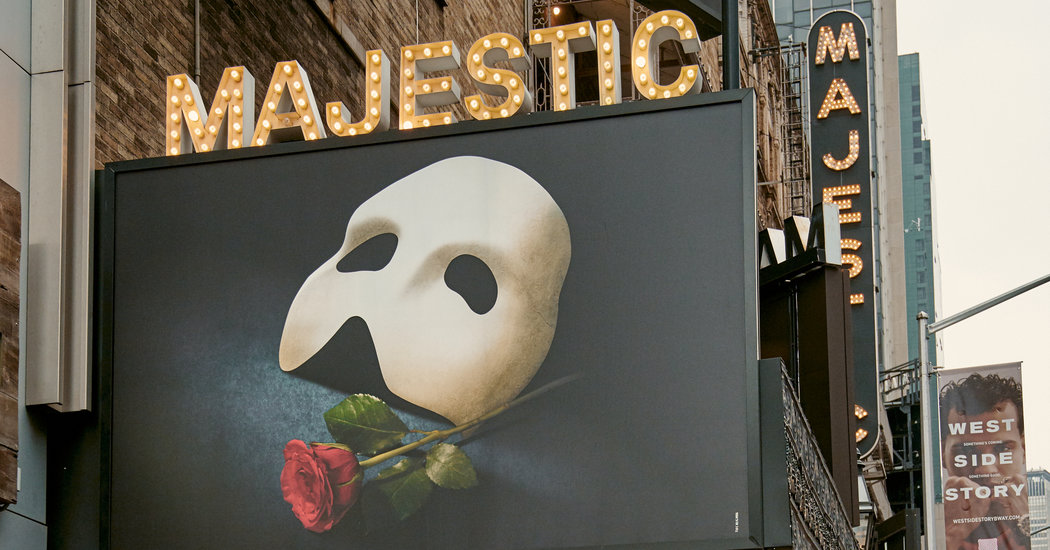 The adage is synonymous with Broadway itself: the show must go on.

And for decades, through wars and recessions and all forms of darkness, Broadway, the heart of America’s theater industry and an economic lifeblood for many artists, has kept its curtains up and its footlights on.

But on Thursday, facing a widening coronavirus pandemic and new limitations on large gatherings, the industry said it was suspending all plays and musicals for 32 days, effective immediately.

“The idea that our venerable, majestic houses are dark, and that there will be no lights on Broadway — I’m romanticizing, but that’s the heartbeat of the city, and to think that they’ve been forced into darkness is shocking,” said Patti LuPone, a beloved Broadway titan who has won two Tony Awards and has been performing in previews for a revival of “Company.” “I’m shocked that they took this tack, but also grateful they did, just to keep us healthy.”

The shutdown — longer than those prompted in recent decades by strikes and snowstorms and even the terrorist attacks of Sept. 11, 2001 — will inevitably cost tens of millions of dollars for investors and artists and associated businesses, and will likely trigger the collapse of some plays and musicals that will be unable to survive the delays and losses.

The move came as Gov. Andrew M. Cuomo and Mayor Bill de Blasio enacted new restrictions to try to stop the spread of the virus, which in the city has infected nearly 100 people, a number expected to grow.

City and state officials banned most gatherings of more than 500 people, and required smaller venues to cut their capacity by half; they also limited nursing home visits. Mr. de Blasio declared a state of emergency, empowering him to take measures like implementing a curfew or limiting traffic should conditions worsen.

Public schools, however, were remaining open. The governor noted many children’s resistance to the virus, while the mayor expressed worry about the disruptions that school closings would create.

Broadway — central to, and symbolic of, New York — is not only the pinnacle of the American theater world, but is also big business: Last season the industry grossed $1.8 billion and drew 14.8 million patrons.

“The full effects of this on the industry can’t possibly be known yet, but our priority has to be the well-being of audiences and our Broadway families,” said Thomas Schumacher, the president of Disney Theatrical Productions (“The Lion King,” “Aladdin” and “Frozen”) and the chairman of the Broadway League, the industry trade group.

The shuttering of theaters, which the Broadway League said would continue through April 12, followed a flood of cultural closings around the country and around the world.

Earlier on Thursday, several of New York’s largest and most prestigious cultural institutions — including the Metropolitan Museum of Art, the Metropolitan Opera, Carnegie Hall and the New York Philharmonic — announced that they would temporarily shut down. At the same time, Live Nation Entertainment and AEG Presents, the corporate giants that dominate the concert industry, suspended all North American tour engagements.

In Asia and Europe, many performance spaces had already closed; in the United States, venues from the 5th Avenue Theater in Seattle to the Center Theater Group in Los Angeles to the Kennedy Center in Washington scrapped shows.

But Broadway has a lot of risk factors — many of its shows attract an older audience, and older people seem to be particularly susceptible to the coronavirus; it depends heavily on tourism, which is plunging as a result of the pandemic; and its theaters, lovely as they are, pack patrons into tight quarters, making the now-recommended social distancing essentially impossible.

As public health officials increasingly warned about the riskiness of large gatherings, and after a part-time usher was diagnosed with the virus, the drumbeat for closing grew louder.

Actors’ Equity Association, a labor union representing 51,000 performers and stage managers around the country, was becoming more and more concerned.

“There’s no such thing as social distancing for actors — our jobs sometimes require that we go to work and kiss our colleagues eight times a week,” said the actress Kate Shindle, who is the president of Equity. “Although nobody wanted to close the theaters, at the same time people were starting to be scared to work, and with good reason.”

And theater producers, facing dwindling advance sales and concern for audiences and employees, came to agree.

“Over the last 48 hours, watching everything escalate and the ground keep shifting, the Broadway League has done the responsible thing,” said Sue Frost, a lead producer of the musical “Come From Away,” which had been set to celebrate its third anniversary Thursday night. “We’ve got to protect our employees and our audiences, and if this is what we have to do, this is what we have to do.”

The industry wanted either Mr. Cuomo or Mr. de Blasio to order a closing, because of a widespread understanding that the shows’ insurance policies would provide coverage only if a closing were government-mandated.

Mr. Cuomo said the Broadway restriction would go into effect at 5 p.m. on Thursday, forcing a temporary end to the runs of all 31 plays and musicals currently in progress, from crowd favorites like “Hamilton” and “The Lion King” to new musicals like “Six,” which had been scheduled to open Thursday night. Signs went up at many theaters with information about refunds (often automatic for those who bought with credit cards from official theater sites) and exchanges.

Mr. de Blasio, speaking at his own briefing, said the restriction was necessary but difficult. “That’s really, really painful for the many, many people who work in that field, let alone so many New Yorkers and people all over the country who really look forward to these events, these concerts, these sports events, and it’s really going to be kind of a hole in our lives and it’s painful,” he said. “It’s not something we would ever want to do but it’s something we have to do.”

Broadway theaters did not close for the 1918 flu pandemic. But in more recent years they have shut down for labor disruptions, storms, and, on Sept. 11, terrorist attacks. Most of the closings were short (Broadway, urged to reopen by city officials, was back in business two days after the 2001 attacks), but many theaters were shut for 19 days by a stagehands’ strike in 2007 and 25 days for a musicians’ strike in 1975.

The suspension was announced while one Broadway matinee, for the long-running “The Phantom of the Opera,” was being performed. (Another matinee scheduled Thursday afternoon, for “Moulin Rouge!”, had been canceled because a cast member was feeling sick and the company had become alarmed.)

Inside the lobby of the Majestic Theater, where “Phantom” has been running since 1988, workers sat sullenly, knowing that the performance would be their last until April. Jim McIntosh, a Broadway bartender, served his last drink at the matinee, and said he had mixed feelings. “Even though it hurts me financially, it’s kind of a relief,” he said. “It’s better to be safe than sorry.”

The suspension comes at a difficult time for Broadway, which had 16 openings scheduled between Thursday (“Six”) and April 23 (“Take Me Out”). The latter date is currently the deadline for shows to open to be eligible for the June 7 Tony Awards. With the suspension of performances, industry officials acknowledge that the deadline and the date of the awards ceremony might have to change.

Given the length of the shutdown, some shows might opt to cut their losses and never open; industry officials said they also expected that some running shows — those already experiencing box office weakness — would close rather than try to weather a shutdown and reopen.

The cancellations will invariably be disappointing for tourists and locals who rely on Broadway for inspiration, entertainment, and artistry. On Thursday afternoon, two visitors from Brazil, Mariana Marinho and Barbara Anderaos, popped into the Broadhurst Theater to ask about tickets for “Jagged Little Pill,” the musical built around Alanis Morissette’s songs. Ms. Marinho, 36, had loved Ms. Morissette’s music since she was a teenager, and the friends had over a week left to explore New York culture.

As they inquired about seating and ticket prices, a box office employee broke the news to them: No Broadway shows until April 12.

“I have never seen a Broadway show, so I thought maybe this was my chance,” Ms. Marinho said. “I guess not.”