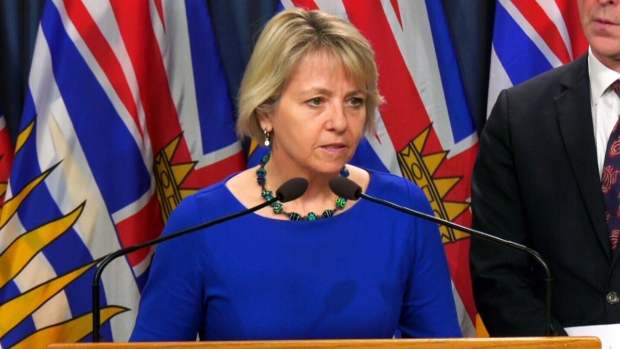 TORONTO — A woman in B.C. has tested positive for COVID-19 despite not having travelled recently and having no known contact with anyone infected with the virus.

Until now, all cases in Canada involved individuals who had recently travelled to countries such as Iran, Italy, Egypt and China or who had close contact with those travellers.

The new case, considered Canada’s first community case, marks the first time that health officials haven’t been able to pinpoint the source of a patient’s infection.

B.C. Provincial Health Officer Dr. Bonnie Henry said she is “really concerned” that there may be other cases linked to the new community case. A public health investigation has been launched.

“We need to find out the source of her infection. So I expect that we’ll see other people turn positive because of that,” Henry said at a press conference Thursday.

“So there’s likely at least one other person out there who has either had this disease or has this disease, and we need to find them and find their contacts so we can stop any further transmission.”

The development comes one day after Health Minister Patty Hajdu said she and other government officials are anticipating a community outbreak and have prepared for such a scenario.

A community outbreak is when the virus moves beyond initial travel-related transmission and begins to spread freely from person to person. A community outbreak has not been confirmed in Canada, but the first community case suggests that there may be others out there who don’t know they have the virus.

To make matters even trickier, COVID-19 can be difficult to detect, particularly at its onset. About 80 per cent of all cases worldwide are considered mild.

Half of all of Canada’s 46 COVID-19 cases are in Ontario. So far, no community cases have been reported in Ontario — but those can be tricky to detect, according to Dr. Susy Hota, University Health Network medical director of infection prevention and control.

COVID-19 can pass through tiny droplets released when a person coughs or sneezes and typically involves close, face-to-face contact. It can also be passed on from a person who is not exhibiting symptoms.

However, the virus may also be passed when a person touches a surface contaminated with the droplets.

“Those droplets can only travel about two metres in distance before they fall onto surfaces. If you happen to be sitting in that range … the droplets might actually be inhaled or get into your mucus membranes,” Hota said.

“Or it can land onto the surfaces around you, you touch those surfaces — which are contaminated — and then your eyes, nose, mouth, and infect yourself.”

Hota added that it’s not entirely clear how long the virus can live on surfaces.

“It’s likely to be hours. Perhaps days,” she said.

British Columbia’s community case was picked up through ongoing surveillance of patients suspected of having the flu. There are now 21 positive cases of the novel coronavirus in B.C., including one woman who is in hospital in critical condition.

In Alberta, the province reported its first presumptive case of COVID-19 on Thursday. A woman in her 50s from the Calgary area who recently travelled aboard the Grand Princess cruise ship in California has been quarantined since Feb. 28 and is expected to make a full recovery.

Ontario reported three new cases of COVID-19 on Thursday, all involving people who had travelled recently. In total, the province has reported 23 cases.

With files from CTV Toronto, CTV Calgary and CTV Vancouver