You Are Here Home Health News Canada to turn back asylum seekers, close border at midnight to stop spread of COVID-19 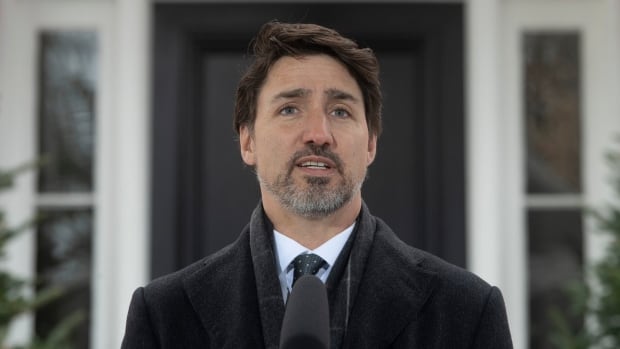 Canada will now turn back asylum-seekers attempting to enter the country outside of official border points, Prime Minister Justin Trudeau announced Friday — part of a set of extreme new measures meant to stop the spread of COVID-19.

Asylum seekers were already barred from entering Canada at official border points under the Safe Third Country Agreement, but migrants have continued to arrive by foot at Roxham Road in Quebec in a steady flow due to an exception for non-official crossings under the agreement.

Another agreement to close the Canada-U.S. border to all but essential travel, trade and commerce will kick in at midnight.

Prime Minister Justin Trudeau says all asylum seekers coming from the United States will be turned over to authorities.  0:56

Trudeau described the measures as part of an unprecedented but necessary response to an emergency that many are comparing to wartime and the Great Depression.

In Canada, the Public Health Agency of Canada has encouraged people to work from home where possible, to self-isolate if experiencing any symptoms, and to practise social distancing to stop the spread of the virus.

Asked if those measures will be enough to meet the threat, Trudeau said nothing is off the table and the government will consider all possible responses, including lockdowns.

“We know there is always more to do and we will encourage people to stay home, to practise social distancing, not just to protect themselves but also to protect our health care workers and the system that is working so hard to keep Canadians safe and healthy,” he said.

Prime Minister Justin Trudeau says Canadians are adhering to social distancing measures during the COVID-19 crisis, but he doesn’t rule out taking further steps if needed.  1:22

The reciprocal agreement on irregular migrants, which Trudeau called an “exceptional” and temporary measure, was signed earlier today. The development comes just one day after the government announced all border-crossers would be under quarantine for 14 days upon arrival, and that the federal government was looking for space to shelter the arrivals.

Public Safety Minister Bill Blair said asylum seekers do not represent a higher public health risk, but monitoring and isolating them would present a challenge in unprecedented circumstances.

“It’s part of a larger suite of measures that we are putting in place to have better control of non-essential passage of that border,” he said.

“This is a challenge to manage and regulate, and so to address that challenge in these extraordinary circumstances, we’ve agreed that this is the appropriate measure to put in place.”

Blair said the number of crossings at Roxham Road has declined in recent days, from about 40 to 50 people a day to just 17 on Thursday.

“During a pandemic, we must uphold our commitments to protecting the rights of refugees and vulnerable migrants. This includes our fundamental legal obligation to not turn refugees away at the borders,” she said in an email.

“We are shocked that the Government of Canada is not prepared to live up to that commitment.”

An agreement to close the Canada-U.S. border to all non-essential travellers is set to kick in at midnight. The border will remain open for trade and commerce to ensure a stable supply chain for goods.

According to a release from the Department of Homeland Security, the agreement will allow people to cross the border for medical purposes and to attend educational institutions or work, and includes exemptions for emergency response and public health purposes, and the transport of goods.

Diplomats, others travelling on government business and military members will also be exempt from the travel restrictions.

One senior Canadian official told CBC News that, despite the directives, travellers should expect some confusion at the border because different agents might interpret their instructions differently — even as the Canadian government continues to remind people not to travel unless it’s absolutely necessary.

The view of the Canadian and American officials who negotiated the agreement is that it allows anyone with a work visa to cross the border, the official said.

Deputy Prime Minister Chrystia Freeland is asking Canadians to be patient as the government tries to implement policies quickly during the COVID-19 crisis.  2:06

Blair said officials on both sides have worked hard to ensure consistency in how the measures are implemented, but he acknowledged border officers will have some discretion.

The U.S. and Mexico are following similar travel restrictions at their shared border.

U.S. President Donald Trump said Friday the measures will help protect the health of people in all three nations and will reduce “the incentive for a mass global migration” that could deplete American health care resources.

Conservative public safety critic Pierre Paul-Hus said the federal government’s decision to close the border to “illegal border crossers” was the “right thing” to do.

“We have been calling on the government to implement stronger measures at the border for days. Today the government finally listened to us and did the right thing by closing the border to illegal border crossers,” he said in a statement.

This week, the government announced an $82-billion package to help Canadians and businesses deal with the financial impact of the crisis. Today, Trudeau said 500,000 Canadians have already applied for employment insurance benefits, compared to 27,000 in the same week last year.

Trudeau also announced details today of an industrial strategy to massively ramp up production of critical medical supplies such as protective gear and ventilators.

The government is also working to help Canadians stranded abroad, and the prime minister announced that a repatriation flight will bring back Canadians in Morocco this weekend.

Talks are underway with airlines to arrange other repatriation flights.

In an interview with CBC Radio’s The Current, Health Minister Patty Hajdu said the situation is “surreal” for most people who are trying to make sense of what’s going on. She said she understands people are scared, lonely and worried about their families and their finances, and wondering when it will end. She said her approach has been to offer Canadians honest, direct answers.

“Actually, I think it’s radical honesty that’s going to get us through this,” she told host Matt Galloway.

“People know that things are drastically different and they need to have information as quickly as possible about what the real circumstances are, and that information is not always easy to obtain, or sometimes it’s evolving.”

Urging people to be kind to each other in a time of crisis, Hajdu said she is most worried about vulnerable individuals who live alone or are struggling financially.

Health Minister Patty Hajdu says it’s tempting for politicians to just make people feel better, but we need to recognize COVID-19 is a real health risk. Hajdu has quickly become one of the faces the this crisis in Canada, and as the number of COVID-19 infections in Canada continues to rise, it is up to her to balance sharing accurate information with keeping the public calm. 18:57