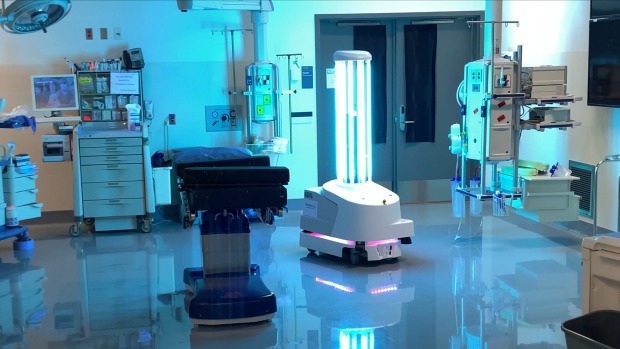 While the idea of using ultraviolet light to disinfect hands, clothing or other household objects is either incorrect or dangerous, researchers say UV-C light is extremely effective when it comes to killing microorganisms, including coronaviruses like the one that causes COVID-19.

The Research Institute of the McGill University Health Centre said in a press release that the use of an automated system to kill harmful bacteria in hospitals could “potentially improve patient safety, as well as protect hospital personnel.”

“We ordered this robot as the COVID-19 pandemic was emerging in China and Europe, with the objective to be first to evaluate this technology in Canada,” Executive Director and Chief Scientific Officer Dr. Bruce Mazer said in the release.

Mazer said the robot arrived on April 27 and will be tested in one patient room and one operating room at McGill’s Centre for Innovative Medicine. He said researchers will be assessing if the robot can be used to disinfect stretchers and N-95 masks.

According to the press release, the robot is programmed to emit concentrated UV-C ultraviolet light onto infectious hotspots in hospitals such as surfaces, beds and protective equipment.

Director of Infrastructure and Biomedical Engineering Rami Tohme said in the release that the novelty of the technology is the robotics, which allows the disinfecting process to be fully autonomous and mobile.

“It is not new to disinfect with UV-C, but the combination of ultraviolet light and robotics makes this technology very interesting. The UV-Disinfection robot can autonomously drive around and position itself optimally in a relation to infection hotspots in any hospital setup. It can apparently achieve a higher disinfection efficiency in less time compared to existing solutions,” Tohme said.

Danish manufacturer UVD Robots manufactured the UV-Disinfection robot and more than 40 hospitals worldwide have purchased its technology amid the pandemic.

The company said the robot works to prevent and reduce the spread of infectious diseases and viruses in the environment by using the ultraviolet light to break down their DNA structure.

The robot will also be tested at the Centre hospitalier de l’Universite de Montreal and in long-term care homes before a decision is made on purchasing the $120,000 device.

If successful, researchers say the robot could potentially reduce health care-associated infections and their consequences, including health complications, deaths and extra costs.

According to the Canadian Patient Safety Institute, approximately 8,000 Canadians die from hospital-acquired infections each year and 220,000 others are infected.