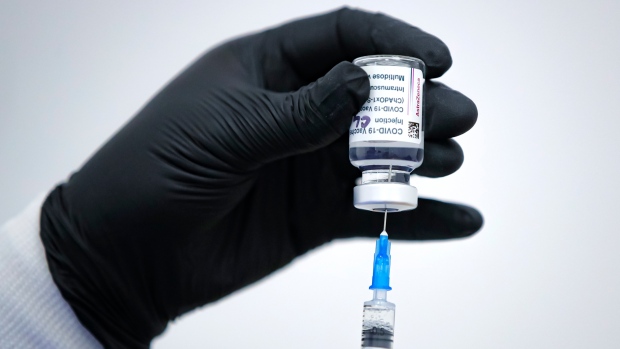 TORONTO — A new Canadian study has found a link as to why some people may develop dangerous but extremely rare blood clots after receiving AstraZeneca’s COVID-19 vaccine.

Researchers at McMaster University in Hamilton, Ont. have pinpointed a group of amino acids that can be “targeted” by key antibodies in the blood following the jab that can trigger an “intense clotting reaction” for some people.

However, experts stress that the odds of developing the rare blood clot known as vaccine-induced immune thrombotic thrombocytopenia (VITT) from the first dose of AstraZeneca COVID-19 vaccine are low, and even lower with the second dose.

Dr. Ishac Nazy, lead author of the study and scientific director of the McMaster Platelet Immunology Laboratory, told CTV News Channel on Wednesday that the new findings could help doctors develop quicker diagnostics and treatment for the clotting.

“What we’ve done is we used basic science to understand exactly how these vaccines are actually producing antibodies that lead to these aggregates in our bodies that activate platelets and lead to clots,” Nazy said.

“We were able to pinpoint exactly where these antibodies are binding, and of course knowing this is super important for understanding how the disease happens,” he added.

The findings were published Wednesday in peer-reviewed scientific journal Nature.

According to the study, some individuals can produce “extremely unusual” antibodies that tightly bind to a specific site on the naturally occurring platelet factor 4 (PF4) protein in the blood after receiving a COVID-19 adenoviral vector vaccine, such as AstraZeneca or Johnson & Johnson.

Researchers say the location and strength of this binding allow the antibodies to cluster PF4 proteins together and form “immune complexes” that can activate these proteins and cause clotting in various spots throughout the body.

Nazy noted that VITT is similar to a syndrome called heparin-induced thrombocytopenia (HIT), which the team of researchers has been studying for many years.

While the two syndromes are different, Nazy says both cause the combination of low blood platelet count and severe clotting from antibodies against the PF4 protein. He added that previously studying HIT helped the team pinpoint how the clots were occurring in AstraZeneca recipients.

Looking at the amino acids of the interaction between the VITT antibodies and PF4 protein, researchers found eight specific amino acids on PF4 that were identical to the binding site of HIT.

“Essentially, this means that VITT antibodies bind to PF4, which activates platelet and other clotting factors causing the severe clotting disorder which characterizes the syndrome,” the researchers said in a press release.

However, researchers noted that the VITT antibodies bound more tightly to PF4 than the HIT antibodies.

By understanding how these reactions can be avoided, researchers said they “believe that safer vaccines can be developed.”

Nazy says the team at McMaster has been in contact with both Astra Zeneca and Johnson & Johnson regarding their findings.

“Moving forward from here there will be more collaborations with them so we can actually see what our discovery has shown and how that can help inform as to what ingredients in the vaccine can lead to the development of these antibodies,” Nazy said.

Nazy said determining what specifically is causing the clots is difficult, however, researchers continue to probe the matter.

“It’s hard to know right now if it’s a specific item in the vaccine that affects a certain specific number of people and why. Those discoveries still have to be made so that a decision can be also made at the level of the company and how they would proceed from there,” Nazy said.

While Canada is no longer recommending AstraZeneca’s COVID-19 vaccine as a second dose option, Nazy said it is important to continue researching the rare side effect as many other countries have continued to use the shot.

“There’s only a handful of companies that are making vaccines, and we need to vaccinate the whole world so there’s a lot of work to be done,” he said.