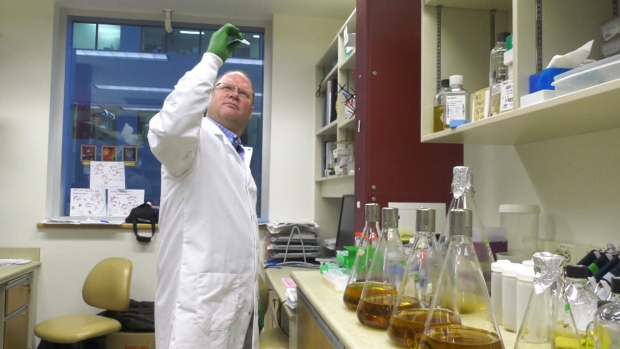 TORONTO — From the prairies to Quebec, researchers across Canada are working diligently to find a cure — or at least a treatment — to fight the spread of the new novel coronavirus.

A research team at the University of Alberta are learning how remdesivir, an antiviral medication typically used to treat Ebola, may work against the coronavirus.

Remdesivir, once fallen by the wayside, is now considered a frontrunner as a possible treatment for COVID-19.

“There are a lot of studies in cell culture and in animal models that have shown that remdesivir, actually shows an antiviral effect against related coronaviruses, such as MERS and SARS,” Matthias Gotte, a virologist at the University of Alberta’s Department of Medical Microbiology and Immunology, told CTV News.

His team’s study, recently published in the Journal of Biological Chemistry, is among the first to explain why remdesivir may work against coronaviruses like COVID-19, by stopping a genetic mechanism in the virus.

“If you target this machine, then it doesn’t work anymore, then the virus cannot replicate” Gotte said.

While testing the drug is still in the very early stages, remdezivir has shown some positive results in the United States, where former COVID-19 patient Chris Kane credits the drug for helping him recover.

“I think within 48 hours I was feeling a lot better than where I was,” Kane said. “I think that remdezivir gave me the extra jumpstart or kickstart or whatever I needed to turn that corner.”

Gotte said that while his team has zeroed in on the drug, it is premature to tell who it might help.

“The answer may not be yes or no,” he said. “We actually have to see who may benefit in treatment with remdezivir. Is it really the very sick patient, or are these patients also those who are just mild or moderate symptoms?”

Other Canadian studies regarding possible COVID-19 treatments are also moving along quickly.

Researchers at the University of British Columbia are experimenting with a drug that was originally developed to treat SARS called APNO1. It ended up being unsuccessful, but may have a role in protecting a patient’s lungs in cases of severe COVID-19.

“Our drug actually blocks this, so the virus cannot bind to its docking system, so it cannot enter the cells,” said Josef Penninger of the Life Sciences Institute at the University of British Columbia.

“Fourteen of them will actually get the drug and 14 of them will get placebo, because it’s really important that with the control trail we really understand if the drug works and how it works.”

“We expect in three to four weeks to have the results,” he added.

A Canadian-made vaccine derived from plants is quickly being developed at the Universite of Laval in concert with a biotech firm based in Quebec called Medicago.

The proposed vaccines is made from particles that look like a shell of a virus designed to trick the body into fighting the infection, according to lead scientist Dr. Gary Kobinger.

“It gives the immune system, a very good image, in which to develop the protective immune response,” Kobinger said. He also helped develop a vaccine for Ebola.

Researchers hope to get federal approval to begin human tests in short order.

“We have put together a plan to be in the clinic within three to four months now” said Kobinger.

Kobinger added that researchers in the field of COVID-19 science are getting extraordinary support from Ottawa.

“I’ve never seen so much support and so much tools and I cannot tell you how much support we’re getting from the government at all levels” he said.

As of Sunday evening, there are more than 335,000 confirmed cases of COVID-19 across the globe, including more than 14,500 deaths. In Canada, there are nearly 1,500 confirmed or presumptive cases of the virus, with 21 deaths.

— This story was written by Melissa Lopez Martinez, special to CTVNews.ca