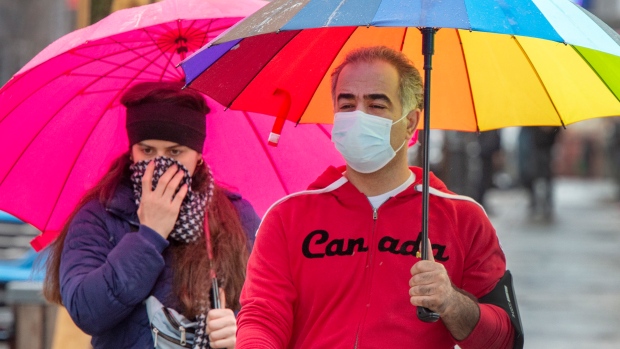 TORONTO — Consistent or constant stress has been felt by more than twice as many Canadians during the COVID-19 pandemic as before it, according to a new survey from Nanos Research.

Geographically, Atlantic Canadians were the least likely to report feeling stress before the pandemic, but Quebecers have taken that mantle away from them since then, while Ontarians have consistently remained the most stressed.

“I hope this survey reminds everyone that it’s normal to feel stressed, anxious or preoccupied during this outbreak,” Louis Bradley, president and CEO of the Mental Health Commission of Canada (MHCC) said in a press release.

“There is no shame in admitting as much, and there is certainly no shame in taking advantage of all the resources at your disposal to help you feel better.”

Those who reported worsening mental health cited increased stress, uncertainty and sleep problems as key reasons why, as well as feelings of isolation and the disruption to normal activities. Those who said their mental health had improved during the pandemic most often chalked it up to self-care routines and taking up new hobbies.

The survey was released in the middle of Mental Health Week, an annual event organized by the Canadian Mental Health Association. On Sunday, Prime Minister Justin Trudeau announced that the federal government will spend more than $240 million to support virtual care, with virtual mental health services a major focus.

The government has also created the “Wellness Together” online portal for mental health help. It includes self-assessment tools, education courses and information on where to find counselling. MHCC, which commissioned the Nanos survey, has its own resource portal.

Although these and other mental health resources are readily available, the majority of respondents to the survey said they have not been making use of them.

Nearly two-thirds – 63 per cent – of those surveyed said they had never gone online in the past month to find information about mental health for themselves or their family, while another 14 per cent said they had almost never done so.

Nanos conducted an RDD dual frame (land- and cell-lines) hybrid telephone and online random survey of 1,049 Canadians, 18 years of age or older, between April 25 and April 27, 2020 as part of an omnibus survey.

The margin of error for this survey is plus or minus 3.1 percentage points, 19 times out of 20.

The research was commissioned by the Mental Health Commission of Canada and was conducted by Nanos Research.