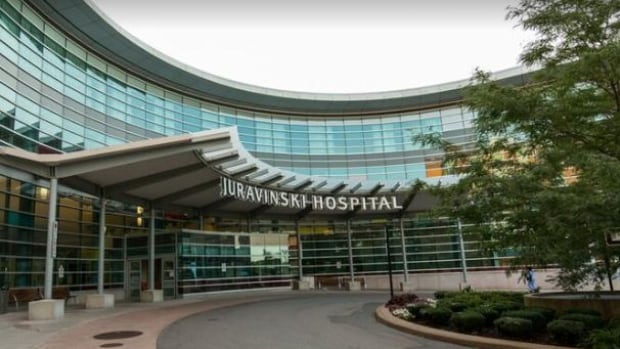 A Hamilton Health Sciences radiation oncologist is the city’s first confirmed positive case of COVID-19, a hospital spokesperson has confirmed.

On Wednesday, CBC learned that a staff member in her 30s tested positive for COVID-19 after returning from a personal trip to Hawaii. Since the doctor’s return to the hospital’s Juravinski Cancer Centre, she was in contact with both cancer patients and staff members.

The doctor was at work on the afternoon of March 9 and was tested that same day. She received confirmation of a positive test on March 10 and has been in self-isolation since.

The 32-year-old, who lives in Burlington, Ont., returned from her trip Saturday.

“When she began to show symptoms, infection-control protocol was swiftly initiated and she was tested in a safe environment.

“Out of an abundance of caution, last week, Hamilton Health Sciences expanded its criteria for testing beyond the standard case definition to include any travel outside Canada. As a result, this case was identified as quickly as possible. She is now in self-isolation protocol.”

Those who may have had contact with the physician are being contacted. That includes her patients, other patients and staff who might have been exposed.

In the meantime, Hamilton Health Sciences is working alongside the city’s public health department and says it has done the following:

The hospital says there is no need for anyone else at the centre or other HHS sites to take any action.

There have been 93 cases of COVID-19 identified in Canada so far, with 41 of those in Ontario, including this latest case.

As the global number of coronavirus cases nears 120,000 people in 115 countries, chances of stopping its spread are now considered unlikely. So public health officials have turned their attention to slowing it down.

During a news conference in Ottawa on Wednesday, Prime Minister Justin Trudeau announced a $1-billion fund to help Canadians cope with the spread of COVID-19.

Ontario’s chief medical officer of health, Dr. David Williams, will hold a media briefing at 2 p.m. ET at Queen’s Park to give an update on the virus.