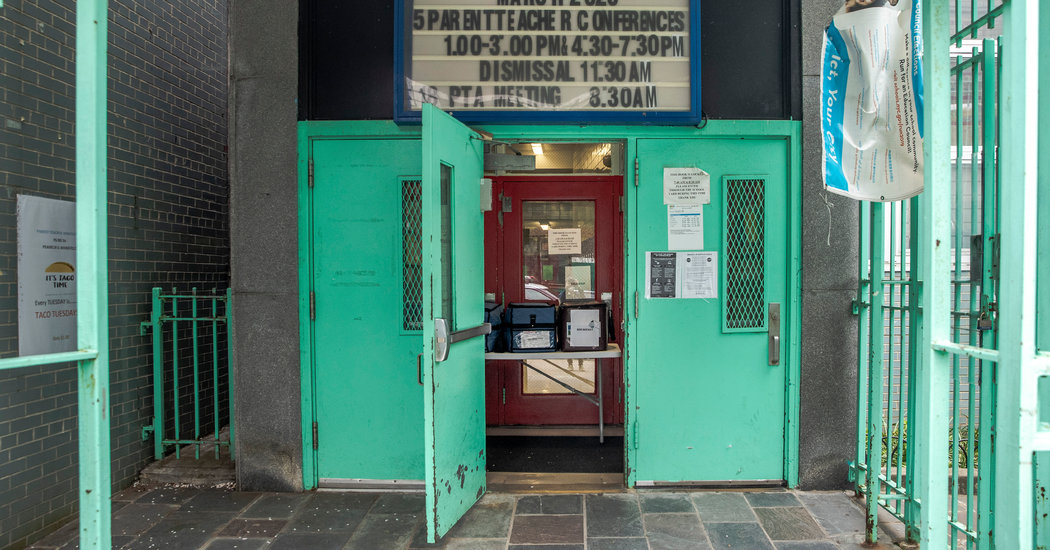 Reopening schools, pre-K and day care centers safely this fall was always going to be a crucial part of resuming normal life in New York City, and a herculean challenge for the nation’s largest school system.

On Wednesday, Mayor Bill de Blasio raised alarms about an unexpected new hurdle: plummeting rates of childhood vaccinations as anxious parents have kept their children home — and away from doctors’ offices.

During the height of the pandemic, from March 23 to May 9, the number of vaccine doses administered to children dropped 63 percent compared with the same time last year, and by 91 percent for children older than 2, according to the city health department.

The city is tentatively planning to reopen its 1,800 public schools in September, along with hundreds of day care sites. But children will not be able to start school and relieve their parents of home schooling and child care duties without shots to protect them against illnesses like measles and chickenpox.

In a typical year, about 98 percent of the city’s public school students are fully vaccinated.

That is especially urgent now, since New York is seeing a rare but alarming trend of children falling ill with what is being called pediatric multisystem inflammatory syndrome, which appears to be related to the coronavirus and can cause serious illness.

But pediatricians said they were much more concerned about spikes in preventable diseases that can be much more dangerous for children than the coronavirus.

“We really don’t want to have collateral damage of outbreaks of deadly diseases because we are afraid of Covid-19,” said Dr. Sean T. O’Leary, a pediatric infectious disease specialist in Colorado.

The city saw last year just how dangerous low vaccination rates can be, when a spike in measles cases concentrated in Hasidic Jewish neighborhoods prompted a public health scramble to tamp down the extremely infectious yet preventable disease.

“The worst thing that could happen would be to have a measles epidemic after this,” said Dr. Michel Cohen, who oversees dozens of Tribeca Pediatrics offices in New York City. Once measles starts to spread, Dr. Cohen said, “it’s very hard to curtail.” Tribeca Pediatrics saw a 40 percent decrease in vaccines administered between late March and mid-May compared with the same period last year.

Other pediatricians said vaccinations are particularly crucial for young children who have not yet had their first round of immunizations.

“If you don’t stay vigilant, you are looking at whooping cough coming back, more cases of preventable infections,” said Dr. Jason Perlman, a pediatrician and infectious disease specialist who practices in Park Slope and Crown Heights, Brooklyn.

A recent change in state law unrelated to the coronavirus now requires public school families to prove that they are up-to-date with immunizations within 14 days of the first day of school. The city is preparing to implement that practice this fall.

Because children require different vaccinations and boosters at different ages, students in kindergarten through high school have separate requirements from toddlers enrolling in licensed day care centers. But the city requires proof of at least some immunizations for children of all ages in all of the centers and schools it oversees.

Vaccination rates have fallen dramatically across the country because of the closures of many practices, as well as fears of taking healthy children to doctors’ offices during the pandemic, though the American Academy of Pediatrics has recommended that parents continue “well visits” that include vaccinations.

Dr. O’Leary said that doctors across the country are just beginning to see families come back to their offices for well visits and shots — and not a moment too soon.

“Most states are still planning on enforcing vaccination requirements for schools,” he said. “It would be better to get them now than to wait for August. If school does start up in August and September, you may have trouble getting into your pediatrician’s office.”

Dr. Perlman, who has kept his practice open for both well and sick visits, said he ensured that his office is as safe as possible for his staff and families.

“We don’t want people being scared of us, we are here for them,” he said.

But with many doctors’ offices closed, some New York parents say they have been struggling to schedule vaccinations for months.

Lindsey Reynolds had a standing appointment for her 16-month-old daughter to receive vaccinations in early April and was planning to bring her child in despite the pandemic.

Then she got an email notifying her that her appointment had been canceled, and Ms. Reynolds spent the next few weeks trying to reschedule the visit before finally getting her daughter vaccinated.

Over the last few weeks, Nechama Levy has tried and failed to make appointments for a well visit and vaccinations with two pediatricians in her Brooklyn neighborhood for her 6-month-old son.

“I am getting nervous because I don’t know how long this will go on,” she said. Ms. Levy is an essential worker and sends her son to day care each day, but is worried that he might catch a preventable contagious disease there.

Pediatricians agreed that delays are most dangerous for infants and young children who are supposed to be getting their first series of vaccinations. Delays in vaccinations and boosters for school-aged children could be less worrying as long as they are rescheduled soon and not put off indefinitely.

As New York City emerges from the worst of the coronavirus pandemic, doctors are imploring families to leave their homes and come back to their offices.

Michael Rothschild, a pediatric ear, nose and throat doctor in Manhattan, said visits to his practice have dropped by 90 percent. Though he does not administer vaccines himself, he has been asking parents via telemedicine whether they have kept up with their child’s vaccine schedule.

“You’d think with this pandemic showing you exactly how awful it is not to have a vaccine, people would get vaccines,” he said.