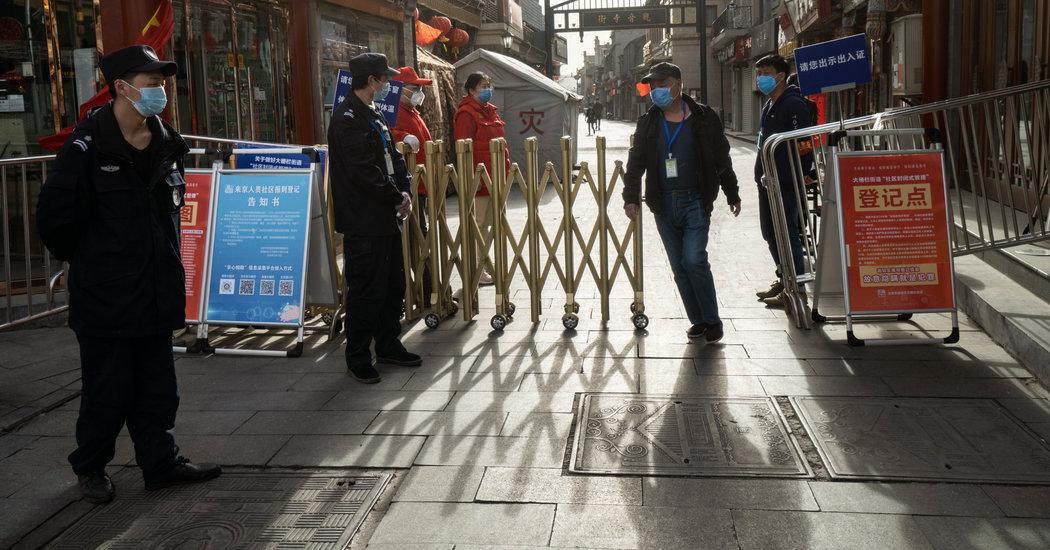 China on Thursday reported no new local infections for the first time since the coronavirus crisis began three months ago, reaching a milestone in its battle with the deadly outbreak that has upended daily life and economic activity around the world.

As governments in Italy, the United States and elsewhere grapple with the pandemic, China has hailed its success as evidence of what can be achieved when a vast, top-down bureaucracy that brooks no dissent is mobilized in pursuit of a single target.

If Thursday’s numbers are more than a statistical blip, it would represent a remarkable turnaround for the Chinese government, which drew widespread public outrage when officials initially concealed and mismanaged the outbreak, even punishing the doctors who sought to raise the alarm.

Those missteps, critics say, allowed the virus to spread uncontrolled across the city of Wuhan in central China, forcing the government to impose draconian travel and quarantine restrictions over hundreds of millions of people that could have been avoided.

While Beijing’s sledgehammer approach — seen by many as an extreme experiment unprecedented in size and scope — worked to quickly lower the number of infections, the price in human trauma and economic loss was severe.

The virus has killed 3,245 people in China so far, making up over a third of the global toll. Eight people died on Wednesday, all in Hubei, the province at the center of the outbreak that began late last year in its capital city, Wuhan, where officials first said they had detected cases of a mysterious pneumonia on Dec. 31.

Hubei has borne the brunt of the epidemic: more than 50 million people there were placed under a tight lockdown from late January, and the province’s case fatality rate, at 4.6 percent, has been several times higher than the rest of the country.

China is not out of danger from a revived contagion and instability. A vast swath of the country’s populace has been embittered by how the ruling Communist Party has handled the scourge. Questions have been raised about the accuracy of China’s statistics. And even if zero local infections has been achieved, that does not mean zero new cases.

Officials said Thursday that 34 new cases had been confirmed among people who had arrived from elsewhere, pointing to how difficult it will likely be for China — or any country — to keep the virus completely out. Within China, many provinces and cities have essentially shut themselves off to travelers from elsewhere, raising the question of whether the virus will re-emerge once such barriers are lifted and people begin crisscrossing the country again.

“It’s very clear that the actions taken in China have almost brought to an end their first wave of infections,” said Ben Cowling, the head of the division of epidemiology and biostatistics at Hong Kong University’s School of Public Health. “The question is what will happen if there’s a second wave because the kind of measures that China has implemented are not necessarily sustainable in the long term.”

China’s leader, Xi Jinping, had called for a “people’s war” against the epidemic and the party’s propaganda outlets have in recent weeks hailed the party’s response as a success and a model for other countries.

The party’s approach has also come at a great cost to civil liberties and economic livelihoods, and some critics have questioned whether it would be viable in open societies where personal freedoms are fiercely protected.

In recent days, fear of the virus and pressure from the public to take stronger measures has pushed democratic governments such as Italy, Spain and France to impose stringent lockdowns on citizens, strategies that some countries were hesitant to adopt just weeks ago.

The longer-term effects of such policies have been particularly evident in Wuhan and Hubei. For weeks, hospitals were overwhelmed and medical workers lacked basic supplies and protective gear. Residents protested over food shortages. Critically ill patients struggled to find timely care. Many died.

In the early days of the outbreak, a shortage of test kits and hospital beds meant many people could not be tested — and infectious disease experts say that some with mild symptoms are likely going undetected now. The government has altered its counting methodology repeatedly, causing large fluctuations in figures.

Flaws in China’s coronavirus strategy in the initial weeks contributed to a surge in viral transmission within families. When hospitals in Wuhan exhausted beds or testing kits, they sent many of the sick home where they infected relatives.

Public mistrust and resentment toward the government elevated to martyrdom the life of Li Wenliang, a Wuhan doctor who was among the first to recognize the infection as a new danger and was penalized by the police in early January for having shared his concerns, which they called an illegal rumor. He died of the infection a month later.

Mr. Xi, calling the virus a “major test” of China’s governance system, hurled the country’s 1.4 billion people into an antivirus mobilization reminiscent of a Mao-style mass crusade not seen in decades.

Neighborhood committees enforced quarantines. Train stations blocked people from entering cities if they could not prove they lived or worked there. In the countryside, villages barricaded themselves with vehicles, tents and other makeshift barriers.

Even as the immediate threat of the virus has diminished in China, the party has continued to push hard to control what is said about itself. The authorities have detained citizen journalists, aggressively censored news reports and social media outlets and expelled foreign reporters whose coverage was deemed defamatory.

This month, Ren Zhiqiang, an outspoken property tycoon, went missing not long after writing an essay in which he argued that the party’s strict limits on free speech had exacerbated the epidemic.

“We saw so many dark things because of the blunt force policies,” said Lan Bo, a Chinese filmmaker from Hubei who has been filming a documentary in Wuhan about the epidemic. “It was a time that showed both the wretchedness and the nobility of human nature.”

Now, China will need to pick up the pieces. To contain the outbreak, the authorities in China shut schools and workplaces and imposed travel and quarantine restrictions on broad segments of the population and many visitors from abroad.

Officials are under increasing pressure to revive the economy, which nearly ground to a halt. The country posted record declines in retail sales, manufacturing activity and investment in the first two months of the year. The stakes for China and the world are high: Economists now believe the country will see its first contraction in decades, which will have knock-on effects for the global economy and could lead to a recession.

In recent weeks, the authorities across the country have lowered emergency response levels to the epidemic, allowing parts of the economy to stir back to life.

In cities such as Beijing and Shanghai, restaurants and shops are reopening. Face masks, social distancing measures, frequent hand-washing and temperature checks at entrances to buildings and restaurants have become the new normal. Most schools remain closed and students have switched to online classes, even attending daily virtual flag-raising ceremonies via video link.

China’s rural areas are slowly letting their guard down as well. In at least one village in the central Chinese province of Shaanxi, makeshift barriers have been dismantled, according to interviews with residents there.

In Hubei Province, restrictions have started easing since a visit by Mr. Xi earlier this month. Businesses and factories have been instructed to gradually reopen. The authorities said residents would each be assigned a colored health code based on their risk level that would allow those from medium and low risk areas to move around the province. In Wuhan, the mass quarantine centers that had been set up to hold infected patients with mild symptoms have all closed.

In a village near Xingshan County in western Hubei, a message instructing residents to resume work came blasting over a loudspeaker earlier this month, echoing across the fertile hills. Villagers exploded firecrackers to celebrate the moment.

“It’s like the war has ended,” said Stefan Kirkeby, an American who had been visiting his wife’s family in the village for the Lunar New Year when the lockdown was suddenly announced in January. “We still cannot leave Hubei but the people’s local freedom has been restored.”

As China shifts away from its wartime footing, experts say the priority should now be to broaden testing in communities and monitoring travelers coming into the country. Airports nationwide have already stepped up screening in recent days for visitors from abroad, and several cities including Beijing earlier this week began placing all incoming travelers in a mandatory 14-day quarantine in centralized locations.

“The important thing now is to maintain vigilance around finding new cases,” said Caitlin Rivers, an epidemiologist and assistant professor at the Johns Hopkins Center for Health Security in Baltimore.

As life in China returns to a semblance of normality, many people are moving on. Even those who had been quick to criticize the government’s initial mismanagement of the outbreak have become more forgiving in recent days, as they have seen governments in the United States and Europe fumble responses to their own outbreaks.

But for many, particularly those in Hubei, the restrictions have already exacted an emotional cost that the country has yet to fully confront. The fear and chaos of recent weeks has prompted some to wonder how in just a matter of days, a mysterious virus could have traumatized the entire country, transforming what is traditionally the most festive time of the year into one of the bleakest.

Wuhan in particular is still reeling from what one resident described as a “living hell.” For many residents, life under lockdown fed public anger and anxiety as supplies of food and medication began running low, mortgage and loan payments came due and the uncertainty of when it would all end set in. For others, there was only grief.

Mr. Lan, the filmmaker, said nearly everyone he encountered in the city had a friend, relative or neighbor who had succumbed to the virus.

“This was our war,” Mr. Lan said. “Everyone has seen so much that we are now numb.”

Some residents in Wuhan are hopeful that the worst has passed. But there remains a widespread, if unspoken, sense among residents that their city of 11 million had been sacrificed to save the country. Wuhan accounted for nearly two-thirds of China’s total infections and more than three-quarters of its deaths.

For some, like Deng Chao, a 30-year-old resident, that feeling of being abandoned will haunt them.

Mr. Deng said he was trapped in a Wuhan hotel in a government-imposed quarantine. Alone in his room, he got progressively sicker without proper medical care for a week.

“Those were the darkest moments of my life,” said Mr. Deng, who has since recovered from the virus and is back home. “I felt so helpless.”