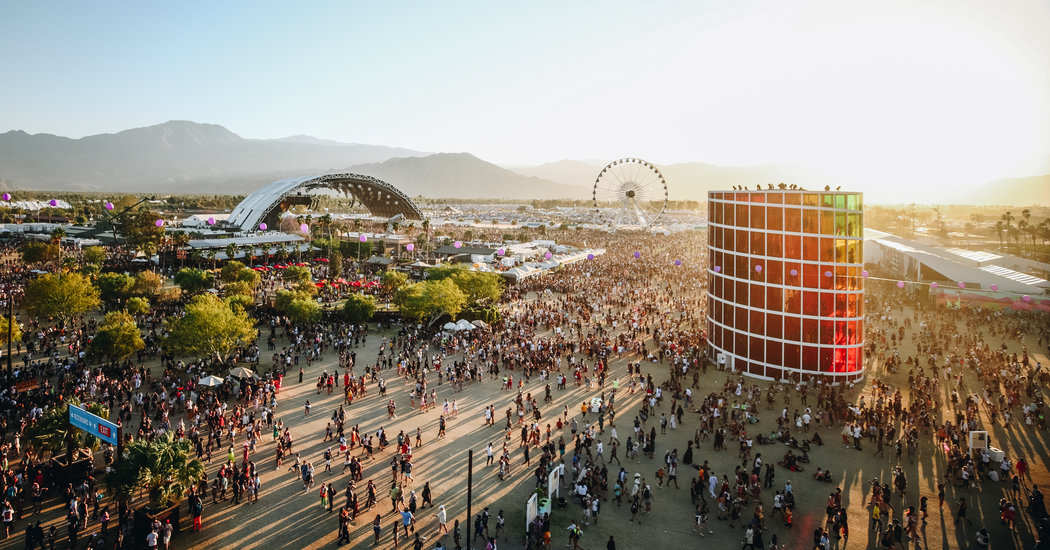 Organizers of the Coachella Valley Music and Arts Festival, the giant pop festival in the picturesque desert of Southern California, have delayed next month’s event to October over concerns about the coronavirus, the festival announced on Tuesday after days of speculation.

The festival, which had been planned in two weekend installments, April 10 to 12 and April 17 to 19, will now take place six months later, from Oct. 9 to 11 and Oct. 16 to 18. In a brief statement, the festival made no comment about the lineup. But the original event was to feature Travis Scott, Frank Ocean and a reunion of Rage Against the Machine, along with dozens of other acts, and Goldenvoice, the festival’s promoter, has scrambled with talent agents in recent days in an attempt to preserve as much of the original lineup as possible.

Also postponed is Stagecoach, a country music festival also from Goldenvoice, which will now take place from Oct. 23 to 25. Both events are held at the Empire Polo Club in Indio, Calif.

Riverside County, Calif., which encompasses the Coachella Valley, said that its public health officer, Dr. Cameron Kaiser, had ordered the cancellation of the festivals, citing concerns about virus-related health risks. The order, the county said, was issued Tuesday “but does not preclude the events taking place at a later date.”

“This decision was not taken lightly or without consideration of many factors,” Dr. Kaiser said. “No doubt it will impact many people, but my top priority is to protect the health of the entire community.”

In its statement announcing the festivals’ delay, Goldenvoice said, “While this decision comes at a time of universal uncertainty, we take the safety and health of our guests, staff and community very seriously.”

Even rescheduled, the postponement of Coachella could pose a significant disruption to the annual concert season. The event, founded in 1999, draws up to 125,000 people a day and has come to be a bellwether for the multibillion-dollar touring business.

In just the past week, the music industry has hunkered down in expectation of changes to come with the spread of the coronavirus. Executives at the major promotion companies and talent agencies — among them Live Nation, AEG, WME, Creative Artists Agency and Paradigm — have formed a task force to share information and to establish practices for dealing with virus-related problems and delays.

Also this week, Neil Young said he was considering postponing his own tour, and Pearl Jam announced the postponement of its North American tour.

“We’ve worked hard with all our management and business associates to find other solutions or options,” Pearl Jam wrote on its website, “but the levels of risk to our audience and their communities is simply too high for our comfort level.”

On Friday, the 34th annual South by Southwest festival — a 10-day smorgasbord of music, film and technology, in Austin, Texas — was abruptly canceled by city and county health officials, only two days after they had said that pulling the plug would not make the community safer. Festival organizers have since said that they do not have insurance to cover cancellation by pandemics or communicable disease, and that they will be laying off a third of their full-time staff.

Riverside County declared a public health emergency on Sunday, after the discovery of the first locally acquired case of coronavirus there, and the BNP Paribas Open tennis tournament in nearby Indian Wells was canceled.

In its statement on Tuesday, county officials said they had reported six coronavirus cases, including four in the Coachella Valley.