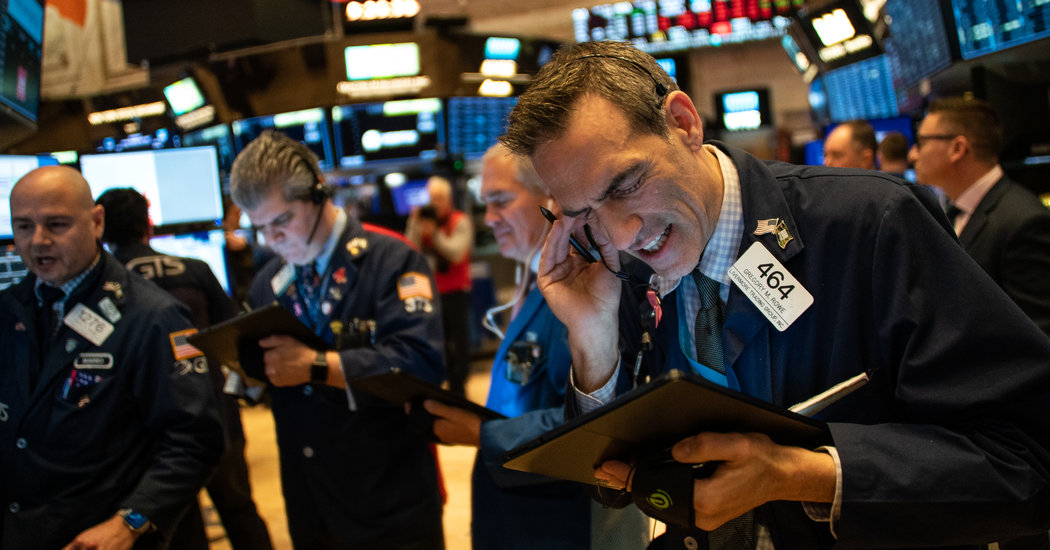 Investors, fearing that the spread of the coronavirus is tipping the global economy into a recession, handed the stock market its largest weekly loss since the 2008 financial crisis on Friday amid worries that one of the longest economic expansions in history may be coming to an end.

With the virus now detected in at least 56 countries, companies are readjusting their annual profit expectations, economists are lowering their forecasts for global growth and policymakers have signaled that they are ready, if needed, to act to stabilize the economy.

As the stock market dropped again on Friday, Jerome H. Powell, chair of the Federal Reserve, issued a short statement affirming that the central bank would use its tools and “act as appropriate to support the economy.” After the Fed’s statement, the S&P 500 pared some of its losses, closing the day down 0.8 percent, though the index remained down 11.5 percent for the week.

Still, there were stark signs that the economic fallout from the virus had started to take hold, as retailers and home builders reported delays in shipments from China, Amazon was running low on hand sanitizers sought by a jittery public and financial regulators began monitoring whether American businesses were starting to have difficulty borrowing money.

“This feels different than the other market crisis in that it involves disruptions to daily life,” said Mark Zandi, chief economist at Moody’s Analytics. “This isn’t financial. This is not some obtuse thing on a screen. Schools may close. I may not be able to get pasta or oatmeal.”

What began a few weeks ago as relatively tepid concerns on Wall Street about disruptions to global supply chains has mushroomed into deep worries about the possibility that millions of people around the world may have to cut back on shopping, travel and restaurants to avoid contracting the virus.

The uncertainty of such situations has made it difficult for experts to predict the damage to the economy. Some are offering probabilities that the American and global economies will slip into recession. Moody’s Analytics said this week that the odds of that happening had risen to four in 10. Capital Economics pegged it much lower, at one in 10.

On Friday, Morgan Stanley researchers outlined three possible situations in a note to clients. In the most benign, the American economy does not slow at all in 2020 from previous forecasts, as the virus remains largely confined to China and Chinese factory production ramps back up in the coming months.

In the most severe scenario, where the virus spreads more widely across countries and sectors of the economy, growth slows to a near halt in the United States for several quarters this year, leaving 2020 with a 0.5 percent growth rate over all. “The risks are clearly skewed to the downside until the outbreak is contained,” researchers at Goldman Sachs said in a note this week.

There was clear evidence in recent days of the economic fallout. Toll Brothers, the luxury home builder, said some home sales to Chinese buyers had been postponed and shipments of fixtures from China delayed. The shoemaker Steve Madden said some shipments would be delayed by three weeks as its Chinese factories struggle to operate with fewer workers.

Perhaps even more troubling were signs that American consumers, who drive the economy, were becoming increasingly uneasy.

On Amazon, popular brands of hand sanitizers like Purell were largely unavailable. What was available was coming from third-party sellers at higher prices. On Friday morning, one pack of two 12-fluid-ounce bottles of Purell was being offered by a third-party seller for $49.99.

Even the parent company of Corona, the beer brand, has seen its shares drop more than the broader market, which some have attributed to its having the same name as the virus.

Such fears do not bode well for a modern economy and stock market that depend on optimism and a willingness to spend. As recently as nine days ago, that optimism helped drive up the stock market to a new high.

But in the last week, the rosy outlook that corporate profits would keep growing has been replaced by panic, said Richard Sylla, professor emeritus at New York University’s Stern School of Business, who has studied stock market shocks through history.

“There was complacency about the growth in stocks, and the virus was the trigger for a sell-off,” he said.

It was an awful week for markets around the globe. The Dow Jones plummeted 12 percent. In Europe, stocks in Britain dropped 11 percent, while Germany was down 12 percent. Asian markets also fell: 10 percent in Japan and 8 percent in South Korea.

Many researchers expect the Federal Reserve to quickly — and possibly deeply — cut interest rates in the face of worsening coronavirus news and market downturns. President Trump, who has downplayed the economic threat to the United States from the virus, said on Friday that he hoped the Fed would step in.

“I hope it gets involved soon,” Mr. Trump told reporters at the White House.

But unlike in previous financial shocks, those moves may not stem the damage.

Even as this week’s stock market meltdown was being compared to the losses of 2008, there were many ways that the coronavirus could prove more challenging for the Fed to tackle.

The Great Recession of 2008 and 2009 was largely a “demand shock,” as banks neared collapse, home prices plunged and trillions of dollars in household wealth were wiped out. People and businesses suddenly had less money to spend, tipping the economy into a deep recession.

The virus threat is a “supply shock” — one that stems from a sudden slowdown in economic activity as China, the world’s factory, struggles to get back to work and as crucial industries come under strain against a backdrop of travel restrictions, limited public gatherings and shuttered schools.

David Wessel, director of the Hutchins Center on Fiscal and Monetary Policy at the Brookings Institution, said the way to think about a supply shock was “suddenly every factory and office produces 10 percent less than it did last year.”

That’s a far harder thing to fix than a demand shock, Mr. Wessel said, since simply putting more money into people’s pockets won’t make up for the fact that stores are closed, factories aren’t operating and trips are canceled.

“There is nothing the Fed can do to offset the lost production if no one is taking trips and factories aren’t making parts,” he said.

So far, the response from the Trump administration to the outbreak has only seemed to intensify Wall Street’s worries.

Early on Friday, Larry Kudlow, Mr. Trump’s chief economic adviser, said markets were overreacting and suggested it was a good time to buy stocks — statements that some investors said were not helpful and perhaps even irresponsible.

“The administration runs the risk of damaging its credibility by continuing to prompt people to buy stocks if there is no clear bottom in sight,” Scott Minerd, chief investment officer of Guggenheim Investments, said in an interview.

Mr. Minerd said he received a call on Thursday from an official at the Federal Reserve Bank of New York asking whether he was seeing any signs of pressure or deterioration in some of the markets that are crucial to Wall Street’s functioning, namely those that provide short- and longer-term debt and other forms of funding to companies from banks and other lenders.

Mr. Minerd said he did not see funding problems as of yet, but he said the sell-off of precious metals was a sign that investors were feeling squeezed by increased margin calls.

Mr. Kudlow and Treasury Secretary Steven Mnuchin, who are on the president’s coronavirus task force, are also part of a group working on a package of tax cuts intended to serve as a centerpiece of his 2020 campaign. With Democrats controlling the House, there has been little expectation of major tax legislation before the November election, and the situation with the coronavirus has not appeared to change that.

On Friday, Mr. Trump sought to restore some optimism, pointing out that the number of confirmed cases of the virus in the United States was still low.

“Some countries are doing well, some countries are not doing well, you can see that for yourself,’’ he told reporters at the White House. “A lot of things are happening, we’re very well organized, we have great talent, great doctors, great everyone. There’s tremendous spirit, a lot of spirit.”