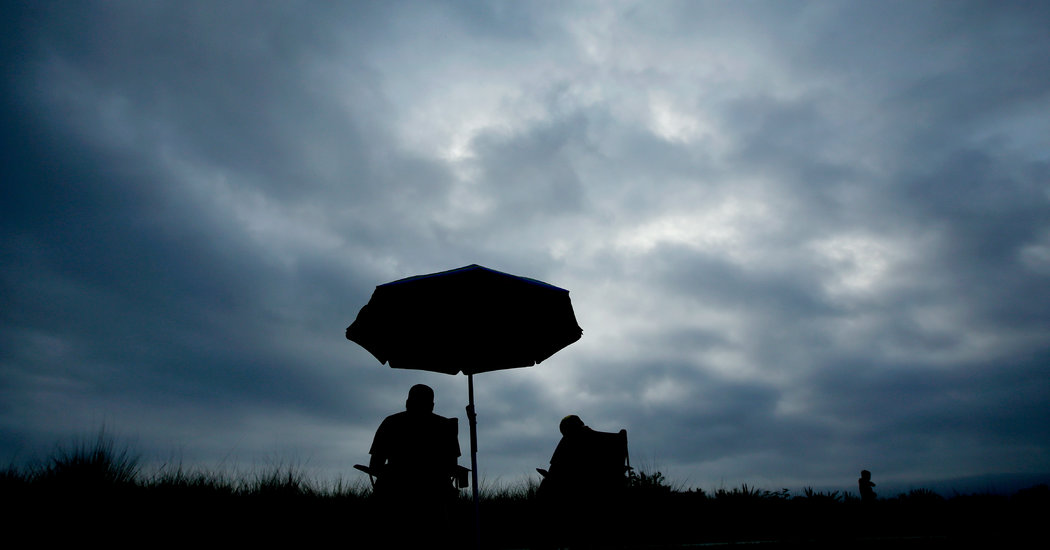 NASA has urged spectators to stay away from the Kennedy Space Center for Wednesday’s SpaceX launch to limit the spread of the coronavirus. But officials from cities and counties around the launch site, an area known as Florida’s Space Coast, are expecting large crowds to gather to watch the country’s first astronaut launch in nine years.

The size of the crowds could still be affected by the weather, local officials said. People would be less likely to make the trip if it looked like the forecast might delay the launch. But local news outlets reported launch viewers were already gathering along the beaches and roadways in prime viewing areas on Wednesday morning.

“When we launch to space from the Kennedy Space Center, it draws huge, huge crowds and that is not right now what we’re trying to do,” he said at a news conference.

The visitor center at Kennedy, usually a prime spot for spectators, will remain closed to the public. The launch of SpaceX’s Crew Dragon capsule, carrying two NASA astronauts, Douglas G. Hurley and Robert L. Behnken, is scheduled for 4:33 p.m.

But outside Kennedy Space Center, NASA has little control over crowds.

Peter Cranis, executive director of the Space Coast Office of Tourism, said he expected a couple hundred thousand people to flock to the beaches and parks, noting that launches in NASA’s glory days had drawn as many as half a million spectators. Mr. Cranis said he anticipated that the coronavirus might deter some, but that many would still come to witness the historic launch. More than a dozen beachside hotels — each with several thousand rooms — reported that they were fully booked ahead of the launch, he said.

“Judging from the crowds on Memorial Day weekend, I would say that people are ready to get out,” Mr. Cranis said. “They seem to be very happy to be able to be out.”

Law enforcement officials did not provide their own projections of expected crowd sizes.

Don Walker, the communications director of Brevard County Emergency Management, said that he was also anticipating big crowds on beaches and roadways, and that departmental staff would ask spectators to keep at least six feet of distance. Kennedy Space Center is in Brevard County.

“Obviously, we cannot be everywhere at once,” Mr. Walker said. “But where we can and where we see groups in proximity and in violation of C.D.C. recommendations, the plan is to simply remind people to take heed.”

At a May 1 news conference, Brevard County’s sheriff, Wayne Ivey, encouraged people to come watch the launch in person.

“We are not going to keep the great Americans that want to come watch that from coming here,” Sheriff Ivey said. “If NASA is telling people to not come here and watch the launch, that’s on them. I’m telling people what I believe as an American. And so NASA has got their guidelines, and I got mine.”

Officer Tod Goodyear, a spokesman for the Brevard County Sheriff’s Office, said that concerns about the coronavirus prompted the department to seek law enforcement officers from several jurisdictions to be on the ground to help monitor crowds.

Officer Goodyear said he expected some people would wear masks and most would be mindful of keeping distance. The sheriff’s office will also be distributing up to 20,000 masks to those who request them.

With around 400 recorded cases, Brevard County hasn’t been hit hard by the virus. And since Gov. Ron DeSantis began reopening the state on May 4, Officer Goodyear said he had noticed more people out and about.

Ben Malik, the mayor of Cocoa Beach, about a 40-minute drive south from the space center, said he was expecting several thousand people to visit its beach, which is about six miles long.

“It’s physically impossible to manage,” Mr. Malik said. “We don’t have the police resources to go out there and keep everyone apart. The best we can do is try to manage the traffic and crowd control.”

Lt. Kim Montes, a spokeswoman for the Florida Highway Patrol in Orlando, said the agency was focused on monitoring traffic and making sure people wouldn’t stop their cars on bridges. In addition to the couple dozen officers normally on duty, an additional 30 troopers from other parts of the state will assist during the day, she said.

“With the pandemic, we really don’t know what kinds of crowds we are going to have,” Lieutenant Montes said. “The weather is going to play a lot into it. Are people going to stay home? Is it going to rain?”