You Are Here Home Health News Coronavirus Models Are Nearing Consensus, but Reopening Could Throw Them Off Again 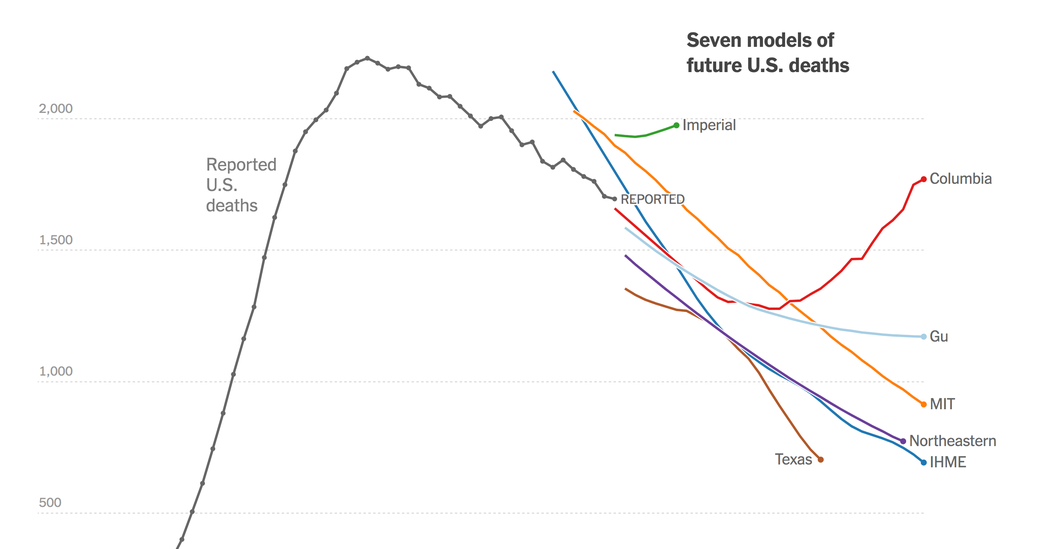 There is growing consensus among modelers estimating the number of cases and deaths from the novel coronavirus in the next few weeks.

But this convergence of estimates — 31,000 to 42,000 additional deaths through mid-June for roughly 120,000 total deaths in the United States — comes just as shifts in public policy are likely to create new uncertainty about the path of the pandemic after that.

A model from the University of Washington, once frequently cited by the White House for its relatively optimistic mortality estimates, has been retooled, and its expected death totals have risen. Others that had anticipated very high death tolls, from Imperial College London and Columbia University, have been adjusted downward. Our charts here show past outputs from the five models in addition to the past and new predictions of two more, from the University of Texas at Austin and from the independent data scientist Youyang Gu.


How the different projections of U.S. deaths have changed over time


The model from Columbia, which assumes that people will loosen their social distancing behavior soon, estimates roughly 1,800 daily deaths in four weeks, the highest of the group making four-week forecasts. The lowest estimate, from the University of Texas, projects daily deaths will drop to less than 700 by June 1. These are large differences, but far smaller than what we saw just a few weeks ago.

Scientists who build models say they find it more useful to look at an ensemble of serious models at once than to rely on one.

“We know there is no perfect model,” said Lauren Ancel Meyers, a professor of integrative biology at the University of Texas, who recommended the ensemble approach as a good way to understand the range of likely outcomes.

The models depicted in our series of charts use slightly different methods. Some rely on classic epidemiology models; others incorporate methods from spatial statistics; some use data about mobility from cellphone records; one uses experiences with the disease overseas as a possible template for the American experience.

The researchers say that they are getting better at understanding the dynamics of the pandemic as Americans largely shelter in place, and that improved knowledge may explain the growing consensus of the models. The near-term future of the pandemic is also a little easier to imagine, with deaths flattening instead of growing rapidly. There may be some peer pressure, too. Nicholas Reich, a biostatistician at the University of Massachusetts who has led a project to standardize and compare model outputs, said he worried about the temptation to “herd” outputs. “Probably no one wants to have the really super-outlying low model or the super-outlying high model,” he said.

As the past record of the models depicted above shows, some of the older predictions have missed by quite a bit.

Dylan George, who worked on Ebola response in the Obama White House’s office of science and technology, and is now a vice president at the technology investment firm In-Q-Tel, said substantially improving the quality of disease modeling might require government spending. He compared the epidemic forecasts to weather forecasts, which were primitive in the last century but have been improved through government investment to become more useful for planning daily life. Weather forecasts also save lives through better predictions of events like hurricanes.

“These are great people who have spent their careers trying to figure these things out,” he said of the academic disease modelers, but he added that their work was not enough. “If a hurricane were coming barreling down on Florida, we wouldn’t randomly ask a bunch of academics to help us track the hurricane. We would have people who, this is their day job.”

Politicians have begun easing restrictions on public gatherings and business activities, and those changes are likely to lead to changes in behavior and to increased transmission of the disease. By how much is still unclear. “There’s a lot more uncertainty because the system is changing under our feet,” said Ms. Meyers, who leads the team behind the University of Texas model, which incorporates cellphone data about how much people are moving and interacting.

Ms. Meyers said changes in behavior were likely to begin showing up as changes in the number of deaths in three or four weeks, just at the edge of the recent predictions.