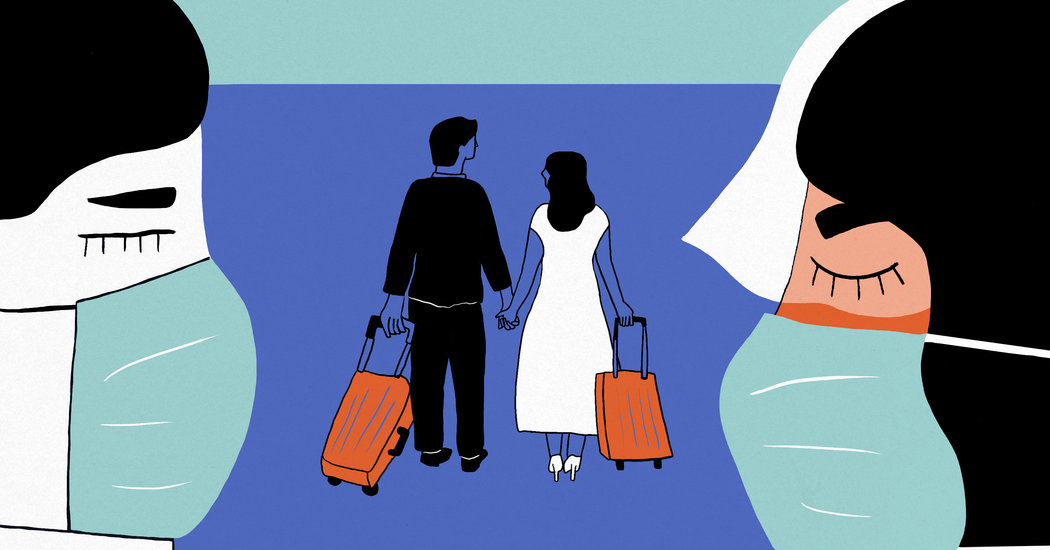 JoAnn Gregoli, a 30-year veteran of wedding and event planning, has advice for couples with weddings on the horizon: don’t cancel because of the coronavirus, but instead, postpone.

With worldwide cases now surpassing 100,000, the New York-based planner has seen the panic begin to set in for wedding industry professionals whose businesses rely on dresses manufactured in China, or flights to destination ceremonies and honeymoons, or even organizing large groups of people.

First there was the groom who called Ms. Gregoli in secret so as not to disturb the bride because, as it turns out, wedding insurance doesn’t cover global pandemics. Then there were the gowns delayed indefinitely. Then the 200-person conference in Milan that had 100, then 50, then 20 attendees before she finally pulled the plug.

Ms. Gregoli said couples who postpone may lose their deposits, but they will lose everything if they cancel. She advised buying dresses off the rack and not to bother with wedding insurance since most policies cover only illnesses afflicting the bride and groom or their immediate family.

When it comes to wedding dresses, “easily 80 percent of the world’s supply comes out of China,” said Steve Lang, the president of American Bridal and Prom Industry Association, a trade organization, and the chief executive of Mon Cheri Bridal. But he said many factories located elsewhere, like in Vietnam and Myanmar, also rely on Chinese fabrics and materials, making the total number of dresses sourced in the country “probably much higher.”

As coronavirus shakes stock markets globally, depth of inventory has become a key factor in a retailer’s ability to ride out the storm. Mr. Lang said Mon Cheri Bridal has “had to substitute a couple of dresses” but their factories are up and running. Small bridal boutiques and online retailers, which keep few dresses on hand, have been hit the hardest by production and shipping delays.

Most of online retailer Azazie’s wedding and bridesmaid dresses are made in China, where coronavirus has hit the hardest. They’ve seen production and shipping delays of up to three weeks, according to Ranu Coleman, the brand’s chief marketing officer.

The company has helped “a few hundred customers” who ordered dresses in January and February, but might not receive their dresses in time, find alternatives, said Azazie’s support team through a publicist. These alternatives primarily include dresses from their ready-to-ship, special occasion and wedding expo inventories. In a few instances, they have given refunds.

The majority of Azazie’s sales come from their made to order dresses. The company also ships samples of bride and bridesmaid dresses, for just $10 to $15 a piece for up to a week, so that customers can try on gowns at home. Their wedding dresses range from $149 to $899.

Ms. Coleman said they have received several questions from customers asking if they can catch coronavirus from packaging or dresses that might have been handled en route by an infected individual.

“We tell them we have people handling packages all the time from overseas and they’re fine,” she said.

According to the Centers for Disease Control and Prevention, it may be possible that a person can get Covid-19 by touching a surface or object that has the virus on it and then touching their own mouth, nose, or possibly their eyes. But the risk that the virus could live on a dress or package throughout the days-long shipping process is likely extremely low.

For David’s Bridal, which boasts 25 percent of the total U.S. wedding-dress market, it’s business as usual, save for the international travel foregone for video conference calls, the contingency plans for airfreighting gowns, and the uptick in anxious calls from nervous brides.

About 50 percent of David’s Bridal wedding and bridesmaid dresses are made in China. Its factories near Hong Kong and Shenzhen are still up and running, its proprietary supply chain and deep inventory spread across 302 stores are mitigating any potential delays, said Jim Marcum, the company’s chief executive officer.

“It’s right to be concerned,” said Mr. Marcum, citing frustration after hearing television reports saying all dress production in China has stopped. (It hasn’t.) “That kind of hysteria is out there. Imagine having to plan your wedding and hearing that.”

David’s Bridal has sought to regain consumer confidence since emerging from Chapter 11 bankruptcy in January 2019.

Not a single bride missed her Saturday appointment at Mark Ingram Atelier in Midtown East Manhattan where designer gowns start at $5,000. That same afternoon at a hospital on the Upper East Side, doctors diagnosed the first confirmed case of coronavirus in New York City.

Mark Ingram’s suppliers in Italy and China closed briefly for inspections but the delays striking other retailers and consumer panic have passed him by, at least for now, he said.

In Italy, Martina Angioni, who plans weddings and vow renewals near Lake Maggiore in the Lombardy region, said she is more than 100 miles from the quarantine red zone. She and her husband, she said, have been largely unaffected; except for the shops and restaurants in their town closing early, the canceled soccer matches, and the three potential customers who now no longer require her services.

Ms. Angioni plans about 12 weddings per year. She is among the 15 percent of Italians who work in the travel and tourism industry — an industry that accounted for more than 13 percent of Italy’s total gross domestic product in 2018, according to the World Travel and Tourism Council.

A wedding and an anniversary party planned for this fall have already been canceled. And her losses will continue into 2021 as potential clients cancel site visits for fear of traveling to the region.

“It’s not in all of Italy. It’s one city,” Ms. Angioni said. She said media reports and Lombardy officials, who have been criticized for inflating the threat by over-testing, are making the problem seem worse than it is and are scaring off potential clients. “It seems only like a flu.”

[Sign up for Love Letter and always get the latest in Modern Love, weddings, and relationships in the news by email.]

Jason Holley and Yuanbo Li, an engaged couple who live in Daly City, Calif., in the Bay Area, remained calm as their April wedding date neared.

Ms. Li, 27, and Mr. Holley, 25, waited as the March 12 deadline to cancel or postpone their ceremony crept closer. They watched as Chinese authorities imposed quarantines and airlines canceled thousands of flights before most Americans had even heard of the virus.

Months before the World Health Organization began discussing the word pandemic, before the shortage of masks, before the coronavirus first appeared in the United States, they had been more focused on Ms. Li’s mother, Dr. Lu MeiHua, a doctor in Beijing.

She wasn’t treating patients with the virus at first — that job was reserved for younger physicians. She had her travel visa and her flight to Hawaii had been booked for months, pushing the rest of Ms. Li’s family to do the same. Under no circumstances would she be missing her only child’s wedding. (She’s been what Ms. Li affectionately calls “proactive” throughout the planning process.)

They decided to postpone their destination wedding in Hawaii, which they had chosen because it was as close to a midpoint as they could find between his family in Pennington, N.J., and hers in China.

Maxim Nowak and Melody Sachmechi plan to stuff guests’ gift bags with small bottles of Purell and tissues for their March 14 wedding in Woodbury, N.Y.

Of their 350 guests, so far one pregnant couple has backed out on account of the virus as have eight members of Ms. Sachmechi’s family from Los Angeles.

Mr. Nowak said he is trying to keep things in perspective but as the day gets closer he has two lingering fears: First, that he and Ms. Sachmechi and their guests won’t be able to dance the all-important hora — the hand holding and hugging may be too dangerous. And second, that his only brother and best man, who is currently on a honeymoon cruise in the Bahamas, might get sick, stranded or quarantined.

It’s not even peak wedding season yet in New York, said Mr. Ingram, the bridal salon owner. That doesn’t start in earnest until May when the weather will be warmer and, if the experts are right, the virus will start to taper off.

A prediction that Ms. Li and Mr. Holley are also banking on.

When it became clear that Dr. Lu MeiHua (who now treats patients wearing two surgical masks, a face guard and “basically a scuba suit,” her daughter said) would not be able to attend the couple decided to postpone their wedding until later this summer.

Still, somehow, after all of this, they consider themselves incredibly fortunate.

Their venue offered them Aug. 16 — “a very lucky date,” Ms. Li said — at no added cost. Even with change fees, flights to Hawaii ended up being cheaper for all but one of their guests. And, happiest of all, they’ll be adding an honorary flower girl named Dalia. (Mr. Holley’s sister is due in April and would not have been able to attend their previous wedding date.)

Ms. Li and Mr. Holley said they hope to go to Kyoto, Japan for their honeymoon.