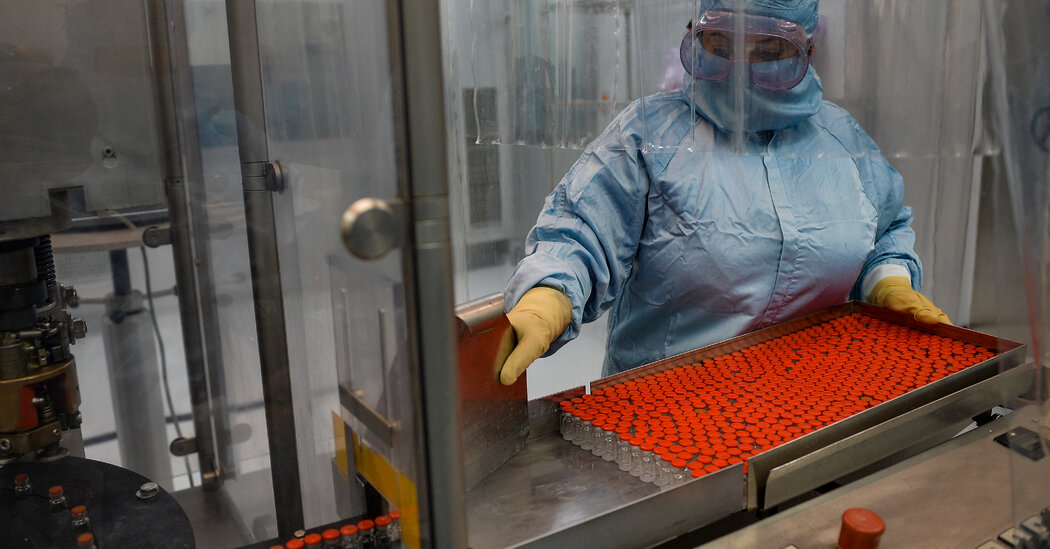 HAVANA — People wait in line for four hours to buy detergent in Havana. Cuban pharmacies are out of pain medication. There are national bread shortages.

And yet the Cuban government says it is on the brink of an extraordinary scientific achievement: the mass production of a coronavirus vaccine invented on the island.

One of the four vaccines developed by Cuban scientists will enter a final phase of testing next month, a crucial step toward regulatory approval that, if successful, could put the island on the path to inoculate its entire population and begin exports abroad by year’s end.

If the vaccine proves safe and effective, it would hand the Cuban government a significant political victory — and a shot at rescuing the nation from economic ruin. For a country that has for decades touted its sophisticated health care system as evidence of the benefits of socialism, the vaccine also offers a unique public relations opportunity.

The vaccine heading for a final phase of trials is called Sovereign 2, in a nod to the pride the island takes in its autonomy, despite decades of hostility from its neighbor to the north. Already, Cuba is floating the idea of enticing tourists to its shores with the irresistible cocktail of sun, sand and a shot of Sovereign 2.

Vicente Vérez, one of the scientists leading the team that developed the vaccine, has said that the island could offer vaccinations to all foreigners who travel there.

“It’s not just medicine and humanitarianism; there’s a big economic payoff if they can get the virus under control,” said Richard Feinberg, a Cuba expert at the University of California San Diego. “It will be not only immediate income, but a boost to the reputation of the Cuban pharmaceutical biotech sector, which will enable them to market other medical products.”

Cuban scientists say the government will probably give away some doses to poor countries, in keeping with its longstanding practice of strengthening international relations by donating medicine and sending doctors to address public health crises abroad.

“Cuba always donated vaccines,” said Gerardo Guillén, a scientist developing two of the four vaccines at the state-owned Center for Genetic Engineering and Biotechnology. “We help other countries.”

Cuba began to pour money into biotech in the 1980s, as part of Fidel Castro’s drive to make the nation self-sufficient in the face of a U.S. embargo that made it difficult to obtain drugs produced abroad.

The investment in public health gave rise to dozens of medical research institutions and a surplus of doctors, which Cuba sends to other countries in medical missions

. In 2019, the leasing of doctors, nurses and technicians brought in $5.4 billion, twice as much as tourism, a major driver of the economy.

The island’s biotech sector is also well developed. Cuba makes eight of the 12 vaccines administered to children on the island and exports vaccines to more than 30 countries.

“It is a biotech juggernaut,” said Gail Reed, the editor of MEDICC Review, a peer-reviewed journal of Cuban and developing world medicine, about the island. “The accomplishments are undeniable.”

Cuban scientists have also developed innovative treatments, including a lung cancer vaccine, which is in trials with the New York-based Roswell Park Comprehensive Cancer Center.

“Sometimes people think because it’s Cuba, they’re just making these drugs in their garage and giving them to people, and that’s not true,” said Candace Johnson, Roswell Park’s president. “They’re very much practicing with exactly the same high standards that every other country does producing these drugs.”

Ms. Johnson said that Cuban scientists demonstrated that they “adhered to all the appropriate standards and controls” before she was able to bring the lung cancer drug to New York.

Producing the coronavirus vaccine was made more complicated by the Trump administration’s tightening of sanctions on Cuba. Scientists say they haven’t been able to buy all the equipment and raw materials they need, including spectrometers used for quality control. The two research groups working on the drug have only one that is powerful enough to analyze the vaccine, Dr. Guillén said, and it’s about 20 years old.

“Cubans not only are able to make old cars still work, they can manage to make old equipment work,” said Mitchell Valdes Sosa, the director of the Cuban Neurosciences Center.

The Sovereign 2 vaccine has progressed through two phases of trials and is set to enter a third phase, where it will be tested on around 150,000 people in Cuba and in Iran, which has shown interest in purchasing the drug. Mexico is also in talks with the Cubans to participate in the third phase of trials.

Like the vaccine being developed by Novavax, a U.S. company, Sovereign 2 is a protein-based vaccine that contains part of the coronavirus. It requires three doses administered in two-week intervals and, unlike the Moderna and Pfizer vaccines, does not need to be stored in deep freeze — which may be a draw for poorer countries that often lack the equipment to keep so many doses frozen.

Dr. Vérez said in a text message that Sovereign 2 is “very safe with very few adverse effects,” a requirement to move onto a third and final phase of trials. Scientists will not publish its efficacy rate until the trials are completed. It is still unclear whether the vaccine will protect against new variants, one of which has already been detected on the island.

The government is optimistic and boasts that it could produce 100 million doses this year, more than enough to vaccinate the entire country of 11 million and, possibly, foreign visitors.

But Cuba may not have the equipment necessary to manufacture its vaccine at that scale. U.S. sanctions have raised the cost of purchasing raw materials and have complicated transfers of funds into the island.

“It might get difficult to purchase enough vials for their 100 million doses,” said José Luis DiFabio, the former World Health Organization representative in Cuba. “Or if you have equipment that needs to be repaired, you don’t have access to the parts that you might need. Or instead of getting something in a week, you get it in a month.”

And opening the doors to vaccine-hungry tourists may create new problems.

Cuba limited the spread of the virus early on, leaning on its tight control of the population and an efficient system for delivering health care. Anyone diagnosed with the virus was immediately hospitalized and put on a cocktail of Cuban and generic drugs.

The government isolated their close contacts and monitored them for symptoms. Cuba reported just 12,225 confirmed coronavirus cases and 146 deaths in 2020, among the lowest rates in the Western Hemisphere.

Then, following the decision to open international air travel in November after a seven-month closure, case numbers spiked. Authorities are now battling the worst outbreak since the pandemic began, with more cases registered in January than in all of last year, and recently set a 9 p.m. curfew in Havana.

The government hasn’t yet announced any specific plans for inoculating tourists, but will have to take into consideration the length of time it would take to deliver all three shots required by Sovereign 2.

Dr. Guillén said that rather than stay on the island for a month and a half, tourists may be given the option to get one shot on the island, and pack the other two doses in their suitcase for vaccination back home.

The plan to open vaccination to tourists appears, to some, to be a risky and shrewdly capitalist gambit to attract visitors, and with them the hard currency the island desperately needs. The combination of the pandemic and sanctions have created the worst economic crisis the country has experienced since the fall of the Soviet Union in the 1990s, experts say.

Cuban scientists, however, insist the goal is to spread health. Any profit, they say, is merely a side effect.