You Are Here Home Health News Could Coronavirus Cause as Many Deaths as Cancer in the U.S.? Putting Estimates in Context 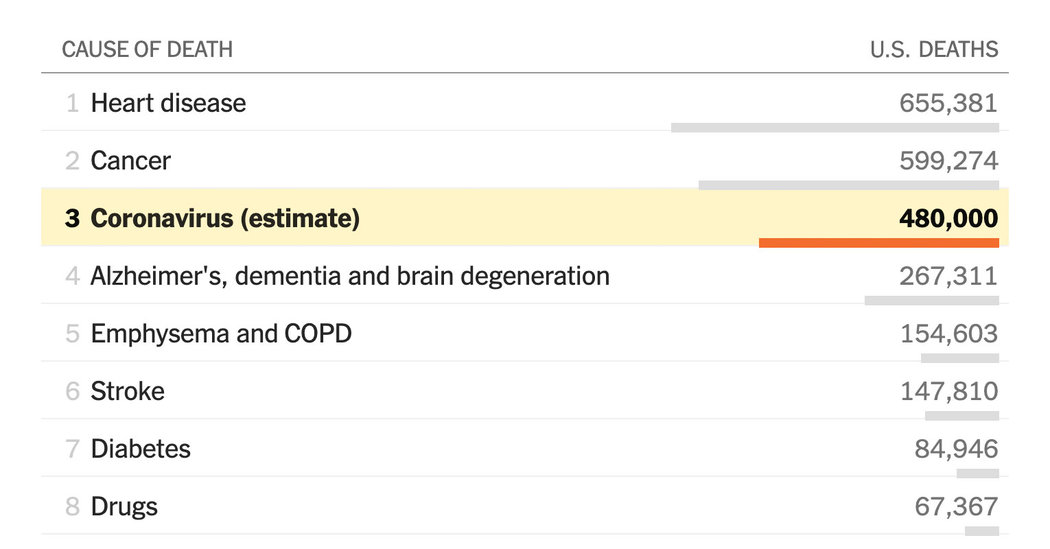 Although it’s impossible to say how many Americans will die because of the new coronavirus, under a reasonable set of assumptions the number of fatalities could be high — potentially in the hundreds of thousands or more.

Deaths on that scale are not easy to grasp. To put the estimates in context, we’re comparing the possible toll with other leading causes of death in the United States in 2018, the most recent year with data available. We’ve started with an estimate from a Nebraska University public health researcher, Dr. James Lawler, that was recently presented to hospital executives: 480,000 American deaths over the course of the illness known as Covid-19.

Use the sliders below to see how the possible death toll of the coronavirus compares.

Here is where coronavirus deaths would rank in the U.S., assuming an overall infection rate of _ and fatality rate of _ over the next year:


How Coronavirus Deaths Could Compare With Other Major Killers

All of the estimates depend on two basic questions: How many Americans will be infected with the virus? And how many who are infected will end up dying? Our sliders allow you to consider a range of options.

As The New York Times reported last week, epidemiologists at the Centers for Disease Control and Prevention recently prepared four scenarios. Their calculations showed a large range of possible fatalities in the United States: between 200,000 and 1.7 million Americans over the course of Covid-19, assuming minimal efforts to contain it.

Few things kill anywhere near so many people in this country. These comparisons assume that the entire coronavirus pandemic runs its course in one year, though it could well take longer.

Dr. Lawler’s estimate, 480,000 deaths, is higher than the number who die in a year from dementia, emphysema, stroke or diabetes. There are only two causes of death that kill more Americans: cancer, which kills just under 600,000 in a year, and heart disease, which kills around 650,000.

A coronavirus death toll near the top of the C.D.C. range (1.7 million) would mean more deaths from the disease than the number of Americans typically killed by cancer and heart disease put together.

Marc Lipsitch, an epidemiologist at the Harvard School of Public Health, places a 20 percent infection share at the low end of what is likely. The governments in Britain and Germany are proceeding on the assumption that the virus may infect 60 percent to 70 percent of their populations.

Many scientists and public health officials who have studied the data so far say they expect a fatality rate for Covid-19 of around 1 percent. But the documented fatality rate in most places is still higher. Places where a flood of sick patients have overwhelmed hospital capacity have had higher death rates than places where everyone who needs medical care can get it.

It’s possible fewer people will die here, either because conditions are substantially different in the United States, or because better treatments are developed, or because efforts to slow the spread help protect the people who are most vulnerable to severe disease. Evidence from South Korea, where the government has undertaken widespread screening and infection control measures, shows a fatality rate closer to 0.8 percent. In Hubei, China, where the disease began, far less than 20 percent of the population has been infected. But China has also imposed strict containment measures, and some experts worry that the numbers could rise once those rules are lifted.

“Anyone who says they know where this is going doesn’t know enough about the virus: We just don’t know,” said Tom Frieden, who was director of the Centers for Disease Control and Prevention in the Obama administration and now runs the nonprofit group Resolve to Save Lives. “What’s going to happen in China when they reopen the economy? We don’t know.”

Mr. Frieden has published his own estimates for the potential death toll. The top of his range assumes no more than half the U.S. population becomes infected. He puts the fatality rate at 1 percent, resulting in about 1.6 million deaths, though he noted that public health efforts could reduce that number.

How Different Age Groups Could Be Affected

The evidence from China, Italy and other countries that have experienced outbreaks suggests that the deaths will cluster among the oldest Americans. In Italy, for example, the average age at death from the disease stood at 81 earlier this month, according to the country’s health department.

The tables below describe the possible effects of coronavirus on Americans of different ages, assuming that fatality rates by age are distributed in the same proportions as those observed in Hubei. The tables also assume that coronavirus cases will be distributed in the same proportions as have been observed so far in the United States according to data collected by The Times. These rankings should be seen as approximate because scientists are still studying the effects of age on the severity of the disease.

Here is where coronavirus deaths would rank among different age groups, assuming an overall infection rate of _ and fatality rate of _ over the next year:

Figures are one-year estimates. Coronavirus deaths could span multiple years. Because no young children in China were reported to have died from the coronavirus, our estimates assume no deaths among Americans younger than 10.·Source: Centers for Disease Control and Prevention

The overall death toll is expected to be concentrated among older patients. But older people have a higher risk of dying of other leading causes of death, too. Younger people, of course, are far less likely to die of things like heart disease and cancer. That means that, while coronavirus deaths under more grim scenarios could become a top cause of death among older Americans, it could also rank among the top causes of death for younger people. Suppose there are 480,000 deaths from Covid-19. That could make coronavirus the second most common cause of death among Americans in their 70s, and the fifth most common cause of death among Americans in their 20s, if the current patterns in infections and deaths continue to hold.

These age-specific estimates are only rough guides. The most detailed estimates of coronavirus fatality rates by age come from China, and public health researchers say they are the best working assumptions. But these numbers are imperfect. Smoking rates among Chinese men are substantially higher than those in the United States, which may mean that older Chinese patients have more cumulative lung damage than older people in the United States.

It is also somewhat unclear whether older people are more likely to be infected with coronavirus — it appears so from the Chinese data — or whether they are just more likely to have been tested and counted. Our calculations used data about the age distribution of infections that have been reported in the United States. Those estimates aren’t perfect, so the number of deaths could be somewhat higher or lower among young Americans.

As the virus spreads in the United States, and as testing capacity improves, we will have a better sense of how many lives will be lost.