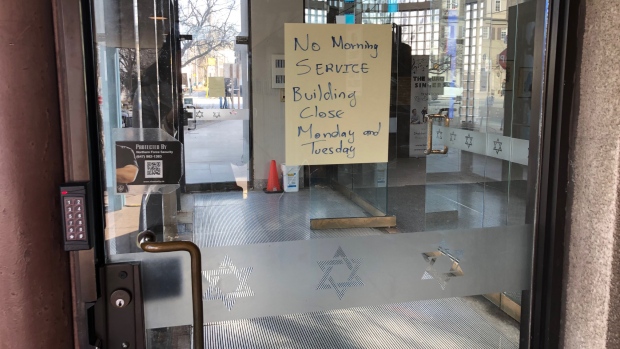 TORONTO — A Toronto councillor is going into self-isolation after visiting a Toronto synagogue where a lay leader has tested positive with COVID-19 shortly after returning from a conference in Washington.

In a statement issued Monday, Councillor Josh Matlow said he met the lay leader during his visit to the Beth Sholom Synagogue, located on 1445 Eglinton Avenue West, on Thursday.

“While I am completely asymptomatic, out of an abundance of caution … I am going into self-isolation until March 20th,” the councillor said.

The statement was released a few hours after the Beth Sholom Synagogue reported that it will be closed Monday and Tuesday to allow staff to complete a “thorough” sanitization of the building.

A spokesperson for the synagogue told CTV News Toronto on Monday that last week one of their lay leaders, who is a member of the congregation chosen as a leader, exhibited flu-like symptoms and got himself tested.

“It showed positive for COVID-19,” the spokesperson said in a statement. “As a result, he was placed into a 14 day quarantine where he currently remains at home and is showing signs of recovery.”

The man tested has not been to the synagogue since his diagnosis, the spokesperson said.

He was confirmed to have been at the American Israel Public Affairs Committee conference in Washington.

A number of other people, who attended the conference last week, have been confirmed to have the virus as well, according to media reports from the U.S.

The synagogue is working with Toronto Public Health to ensure “the safety and security” of the congregation members.

The building will reopen when the sanitization is complete, and services will resume, the spokesperson said, adding that out of an “abundance of caution,” they will cancel all celebrations, events, and general operations connected to Purim, a Jewish holiday.

“Anyone who is coughing, sneezing and feeling unwell should not to come into the building and should seek medical guidance,” the spokesperson said.

“The religious leadership, along with the synagogue’s volunteer lay leadership, are at home under self-isolation in order to protect the well-being of the community.”

As of Monday morning, 34 people tested positive for COVID-19 in Ontario, including four patients who have recovered.