You Are Here Home Health News COVID-19: Albertans urged to cancel all gatherings of more than 250 people 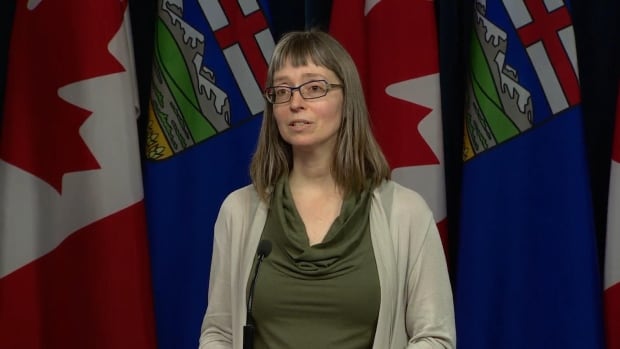 Public gatherings of more than 250 people and all international events should be cancelled as Alberta’s public health system works to contain the spread of COVID-19, says the province’s chief medical officer of health.

With four new cases reported on Thursday, all in the Calgary zone, Alberta must adopt aggressive new measures to limit the spread in the virus, Dr. Deena Hinshaw said at a new conference.

Schools and day cares can remain open, Hinshaw said, but should avoid large gatherings or children or students.

With information about the spread and impact of the COVID-19 pandemic changing by the hour, Hinshaw outlined new measures being taken to isolate and limit the number of cases.

Organizers have been asked to cancel all events with more than 250 attendees, and any event with more than 50 attendees that expects to have international participants, or involves critical infrastructure staff, seniors or other high-risk populations.

The new measures do not at this time include schools, post-secondary institutions, places of worship, grocery stores, airports or shopping centres, Hinshaw said.

All Albertans are now being advised not to travel anywhere outside the country as the global situation is changing so quickly it is no longer possible to assess the health risks of individual destinations, Hinshaw said.

The four new cases brings the province’s total to 23. One new case reported Thursday involved a two-year-old child who tested positive after returning from a family trip to Florida. The child is recovering at home in Calgary, she said.

On Wednesday, hours after the World Health Organization declared a pandemic, she told reporters Alberta had 19 cases of COVID-19, all involving people who had recently travelled outside the country.

Much has changed since then.

Suncor confirmed to CBC News on Thursday that a child in a daycare located in the company’s downtown headquarters had tested positive for COVID-19.

Professional sports leagues have suspended or postponed their seasons.

Alberta Premier Jason Kenney says the COVID-19 outbreak is having serious effects on his province’s economy, but his government will take “extraordinary action” in response. 2:24

The first minister’s meeting scheduled to be held in Ottawa has been cancelled. Prime Minister Justin Trudeau and his wife, Sophie, have gone into self-isolation after she showed symptoms upon return from a trip to the U.K.

The United States has confirmed more than 1,300 cases and has now suspended all travel from Europe, with the exception of Americans returning home from abroad.

Manitoba and Saskatchewan have confirmed their first cases.

By Thursday, Canada had reported a total of 141 cases, with one death in B.C.

Hinshaw is scheduled to provide her latest update from the media room at the Alberta legislature at 3:30 p.m. MT.