You Are Here Home Health News COVID-19 could infect 30 to 70 per cent of Canadians: health minister 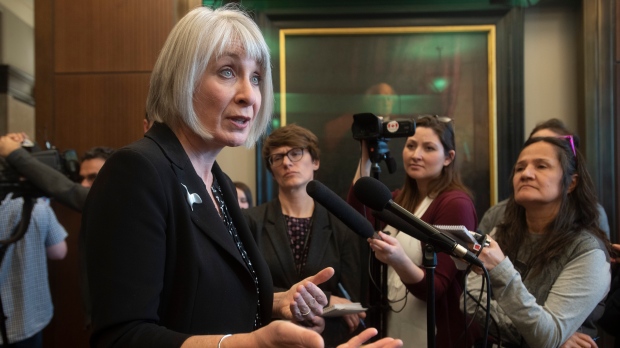 TORONTO — Between 30 to 70 per cent of the Canadian population could become infected with the novel coronavirus, according to federal Health Minister Patty Hajdu.

Speaking to the House of Commons health committee on Wednesday, Minister Hajdu said she wasn’t surprised the World Health Organization (WHO) declared the COVID-19 outbreak a pandemic earlier that day. She said based on the new cases that have been identified in the country this week, it’s become clear that “Canada is clearly not immune in the case of a global pandemic.”

In response to the growing emergency, the federal government has rolled out a $1-billion package to help the country’s health-care system and economy cope with the outbreak. Approximately half of that amount, or $500 million, will be transferred to the provinces and territories so they can prepare for and react to the spreading virus.

As of Thursday morning, there have been more than 100 confirmed cases of COVID-19 and one death from the virus in Canada. Nine people have recovered from the illness so far.

While the Public Health Agency of Canada (PHAC says that the risk to the general population is low, Hajdu said the number of infections in the country could rise in the coming weeks.

However, she said the exact number will be dependent on how the country responds to the outbreak.

“I think all of us around this table would agree that this is a national emergency and crisis and that we need to actually make every effort as Canadians and as leaders to be informing the people who are listening to us,” Hajdu said.

Most people are expected to recover from the illness, but Hajdu said it was important to protect seniors and those with compromised immune systems or pre-existing conditions.

The health minister stressed the government is working with its provincial counterparts to “flatten the curve,” or keep infections manageable at any one time, so that individual health systems aren’t overwhelmed by a sudden increase in cases.

“The intent of flattening the curve is so that everyone doesn’t get sick all at once, so that we don’t see a severe peak, and so that we can actually support our health-care system to manage severe illness at that higher level in a way that’s much more predictable and that we have the time and ability to ensure that we can procure the additional materials that they would need as that illness continues,” she said.