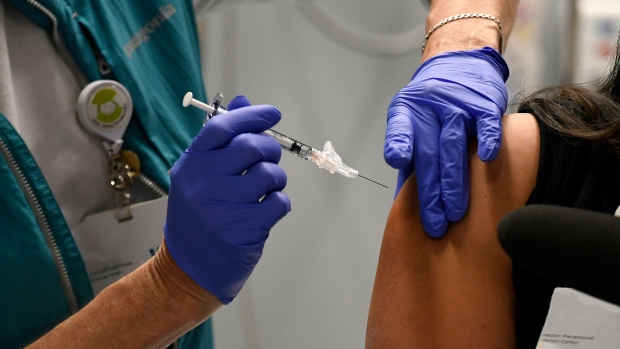 TORONTO — COVID-19 infections are still hitting the United States worse than Canada, despite the vaccination gap between the two countries.

Barry Pakes, an assistant professor at the Dalla Lana School of Public Health at the University of Toronto, told CTVNews.ca that the U.S. continues to experience high infection rates amid ongoing vaccinations because the population is so much larger than that of Canada’s.

“Throughout the whole pandemic case rates, even in the best states in the United States other than Hawaii, it’s been an order of magnitude higher than that even in Ontario when we’re at our worst,” Pakes explained in a telephone interview on Thursday.

“[Cases] are certainly coming down and the U.S. is doing a really good job of vaccinating their population now, but they started from such a higher place,” he added.

Since the start of the pandemic, the U.S. has logged nearly 40 million coronavirus infections, according to data collected by Johns Hopkins University. As of Thursday, Canada has recorded more than 1 million cases.

Overall, even Canada’s highest-reporting regions are low compared to places south of the border.

According to data tracked by CTVNews.ca, there are 16 states as of Thursday that have more daily infections per capita than any province in Canada. When you compare provinces and states, Canada’s first region, Alberta, ranks 17th when it comes to recent cases per capita.

Even at their peaks, Canada’s provinces and territories are still relatively low; Nunavut tops the list for Canada at 49th overall in terms of highest all-time average daily cases per million people.

When you look at the rate of vaccines being administered in each country, the U.S. has given at least one dose of a COVID-19 vaccine to nearly 33 per cent of its population, while Canada has vaccinated about 16 per cent.

Pakes explained that vaccine rates don’t show the entire picture of the pandemic in the U.S., as the country has a greater capacity to handle more infections.

“They just have a higher tolerance for higher numbers of cases and deaths. They also have a lot more health-care capacity, so with higher cases they can still manage in their hospitals as opposed to our ICUs that are more constricted,” Pakes said.

While the data shows that the U.S. has vaccinated more of its citizens than Canada, Pakes said it will still take them longer to inoculate their entire population compared to Canada because of the differing population sizes.

“I really would not say they’re doing better. I mean, at this particular point in time they’re not doing egregiously worse. But… overall in the country, they still have higher infections rates than we do,” Pakes said.

Dr. Lisa Barrett, an infectious disease expert and assistant professor at Dalhousie University in Halifax, noted that some areas in the U.S. that have high vaccination rates are still experiencing a high number of infections.

Barrett explained in a telephone interview on Thursday that this is because the U.S. has drastically rolled back public health measures including physical distancing and masking, as well as increased capacity in retail stores and restaurants for those who have received a COVID-19 vaccine.

Barrett told CTVNews.ca it its important for public health measures to be maintained for a certain length of time after being vaccinated as transmission can still occur.

“The early data we have from Europe says that transmission and infections are much lower after you have been fully vaccinated. However, it’s not non-existent that infections and transmissions may happen,” Barrett said, adding that the time to establish immunity varies from two to 12 weeks after inoculation.

“Some of these infections are happening in a period of time after the vaccination when people aren’t fully protected,” she said.

GETTING MORE VACCINES IN ARMS

Just because the U.S. is vaccinating a lot of people, Barrett said this does not mean that they’re “vaccinating the right people at the right time.”

“I think the U.S. has done well… but I’m not certain that they’re getting to everyone who’s high risk or else we wouldn’t be continuing to see infections there,” Barrett said.

Dr. Matthew Oughton, an infectious disease specialist and assistant professor at McGill University in Montreal, says the main reason why the U.S. had vaccinated more people than Canada is because the country has more vaccine supply by producing them within its own borders.

Oughton told CTVNews.ca in an email on Thursday that Canada’s vaccination efforts are “almost entirely at the mercy of vaccine shipments.”

“Many factors can reduce or delay those shipments, such as manufacturing capacity, production problems, or vaccine nationalism,” he said.

In order to get to the same vaccination pace as the U.S., Oughton said Canada needs to continue to ensure its vaccine supply as it ramps up its rollout as Canada doesn’t have the industrial capacity to manufacture its own doses.

“Increasing vaccination capacity by enlisting assistance of physicians and pharmacies should increase our throughput, as well as initiatives like Quebec’s walk-in clinics for giving AstraZeneca and Ontario’s plan for access to vaccination for all adults living in high-incidence postal codes,” Oughton explained.

In addition to accessible supply, Barrett said Canada needs to continue to address socio-economic barriers in hotspot regions that may be preventing vaccines from reaching arms, including ensuring time off work to get inoculated.

“We really need to make sure we don’t just bring vaccines to those areas, but the community is able to lead how they want them delivered — in what ways and with what other supports — to make vaccines actually get into arms in those higher risk communities,” Barrett said.

“It’s not just about geography, you’ve actually got to provide the other things around this that support people to get vaccines,” she added.