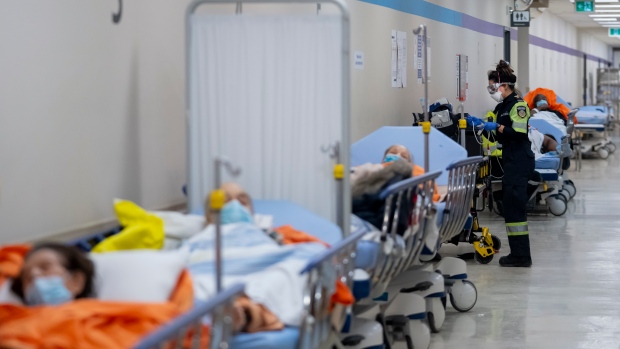 A new study out of Sweden has found that those who contract COVID-19 have an increased risk of certain types of blood clots, which can be fatal, up to six months after infection.

The observational study, published Thursday in the British Medical Journal, reports an increased risk of deep vein thrombosis, a blood clot in the leg, up to three months after COVID-19 infection; pulmonary embolism, a blood clot in the lung, up to six months later and a “bleeding event” up to two months.

According to researchers from Umea University, these events were higher in patients with underlying health conditions and those with more severe COVID-19.

Researchers also found there were more blood clot-related events reported during the first pandemic wave, compared with the second and third waves. However, they note this could be due to improvements in treatment and vaccine coverage in older patients following the pandemic’s first wave.

The study’s authors say the findings suggest that COVID-19 is an “independent risk factor” for blood clots and bleeding.

Researchers say the results highlight the importance of using medical treatments such as blood thinners to prevent the development of thrombosis amid the pandemic. Such treatment is known as thromboprophylaxis.

“Our findings arguably support thromboprophylaxis to avoid thrombotic events, especially for high risk patients, and strengthen the importance of vaccination against COVID-19,” the study’s authors wrote.

While a separate study published in August found that blood clots can also occur after COVID-19 vaccination, experts say the risk is much smaller compared to blood clot risk from infection.

Previous data has shown that COVID-19 increases the risk of serious blood clots, known as venous thromboembolism or VTE, but there has been little evidence according to researchers on the length of time this risk is increased.

To analyze the risk of deep vein thrombosis, pulmonary embolism and bleeding, such as gastrointestinal bleeding or a burst blood vessel in the brain, after COVID-19 infection, researchers looked at more than one million people with confirmed infection between February 2020 and May 2021 using national registries in Sweden.

According to the study, this was then compared to the data for more than four million people without COVID-19.

Researchers analyzed the risk of blood clots during the period after a person developed COVID-19 symptoms, compared to before they tested positive and long after signs of the virus had disappeared.

As this was an observational study, researchers say they cannot establish COVID-19 as the cause of these blood clots, but have a couple theories on why it happens. These possibilities include the virus having a direct effect on the layer of cells which line blood vessels, an inflammatory response to the virus, or the body making blood clots at inappropriate times.

Researchers also acknowledged “several limitations” which might have affected their findings, including limited COVID-19 testing during the first wave and blood clots being underdiagnosed in patients.

Despite such limitations, researchers say their findings are “largely consistent” with similar studies on the association between COVID-19 and thromboembolic events.

In an accompanied editorial on the study, also published Thursday in the British Medical Journal, researchers at the University of Glasgow note that governments are removing public health measures and shifting to a “live with COVID” approach to managing the pandemic, despite the continued emergence of new, more transmissible variants of concern.

However, they say the new study is an important reminder of “the need to remain vigilant to the complications associated with even mild SARS-CoV-2 infection, including thromboembolism.”

What to know before buying over-the-counter hearing aids