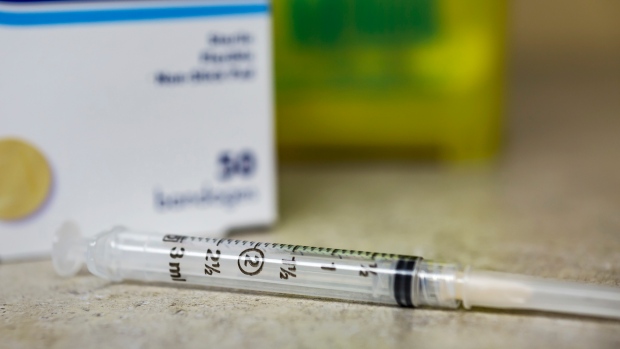 TORONTO — Experts say there just isn’t enough evidence to support a hypothesis that flu-vaccinated individuals may be more resistant to COVID-19, despite a recent study’s findings.

The study, which was published in the American Journal of Infection Control, was conducted by researchers out of the University of Michigan looking at data from 27,201 Michigan residents who took a COVID-19 test before July 15, 2020. Of those residents, 12,977 were previously vaccinated against the flu.

According to the findings, the odds of testing positive for COVID-19 were reduced in patients who had received an influenza vaccine compared to those who had not received a flu shot by 24 per cent.

Additionally, the study found that flu-vaccinated residents were less likely to require hospitalization or mechanical ventilation, and had a shorter length of stay in hospital.

Importantly, however, the researchers found no difference in mortality or the need for intensive care between those who had been vaccinated against the flu and those who hadn’t been.

While the authors of the study acknowledged their study couldn’t determine why flu-vaccinated individuals appeared to fare better against COVID-19 than their fellow subjects, they put forth a “hypothetical, yet plausible” explanation.

The researchers hypothesized that the influenza vaccine may also offer protective effects against the novel coronavirus due to a process called “trained immunity.”

Rob Kozak, a clinical microbiologist at Sunnybrook Hospital in Toronto who helped isolate the SARS-CoV-2 virus in March 2020 and who was not involved in the study, explained that there are two branches of the immune system – the innate immune system and the adaptive immune system.

The innate immune system is the “first line of defence,” he explained, and it doesn’t have a memory for certain pathogens so it just attacks anything that invades the body.

The adaptive immune system, on the other hand, is the one that can be trained to recognize specific pathogens.

“The idea of trained immunity is that the stimulatory molecules from any pathogen can kind of get that [innate] immune system really fired up and activated,” Kozak told CTVNews.ca during a telephone interview on Thursday.

According to the researchers, this means that the introduction of the influenza pathogen during vaccination may be enough to activate the innate immune system, which then fights off a potential infection from SARS-CoV-2, the virus that causes COVID-19.

And while Kozak called it an “interesting hypothesis,” he said the data to draw such a conclusion just isn’t there in this particular study.

Dr. Michael Silverman, chief of infectious diseases at the London Health Sciences Centre and St. Joseph’s Health Care London in London, Ont. and who was not involved in the study, said the researchers are only able to show an association and not causality.

He said it’s more likely that the lower rate of COVID-19 infections and severe outcomes among flu-vaccinated individuals is due to socio-economic factors and not due to something immunological, such as trained immunity.

“People who get their flu vaccine tend to be people who take care of their health and tend to go to doctor’s appointments,” he explained during a telephone interview on Thursday.

“This is an American study, so they tend to have insurance if you go get your vaccine, whereas, people who have limited insurance, or limits on the number of visits they can take, are not going to go just to get a flu shot.”

Kozak agrees that the flu-vaccinated residents were more likely to follow public health guidelines and take care of their health. If they had access to the vaccine, he says, it’s also more likely they would have an insurance plan and a job that allows them to work remotely as opposed to those who work in lower-paying jobs with potentially more exposure to the virus.

“I’d like to see this data repeated in other populations, including in populations outside the U.S., because then you can account for differences in habits and lifestyles and all those kind of socio-economic factors,” he said.

To their benefit, the researchers did note in the study’s limitations that they were unable to control for disparate socio-economic factors between the flu-vaccinated group and the others, and further research is needed.

“A prospective study accounting for these differences is needed to explore the possible protective effect of the influenza vaccine on COVID-19 susceptibility and outcomes,” the study stated.

While Kozak said the researchers’ hypothesis about the influenza vaccine being potentially protective against COVID-19 was worthy of further investigation, he stressed the importance of getting a COVID-19 vaccine.

Silverman added that now is not the time for people to be bombarding their health-care providers with requests to receive the flu shot because it’s the end of the influenza season.

“With all the family doctors’ offices and pharmacies and everything gearing up to start giving COVID vaccines, should we then be throwing a whole bunch more people at them to get the flu shot now based on an association study? No, I don’t think so,” he said.

In the fall, however, Silverman encouraged people to go get their flu shots as they would any other year and hopefully by that time, everyone who wants to be vaccinated against COVID-19 will have already received their shot.

“I think it’s an interesting study, but it’s not likely to change what we do. Had this come out in September, before the COVID vaccine was available, this would be one more argument that people in October and November should get their flu shot,” he said. “It needs further research.”