You Are Here Home Health News COVID-19: Quebec has confirmed its first death due to coronavirus 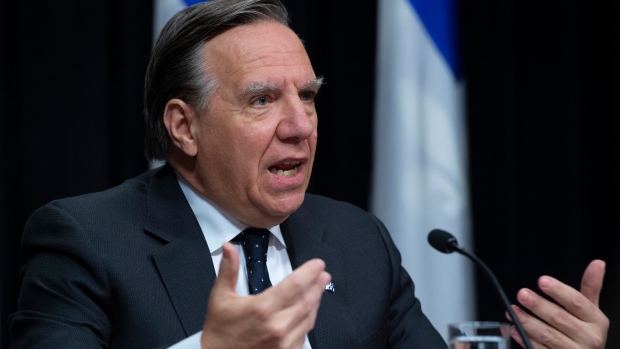 MONTREAL — Quebec has confirmed its first death due to coronavirus.

The patient who died was an elderly person in the Lanaudiere region, Quebec Premier Francois Legault announced.

Legault said all measures were being taken to investigate who the patient may have come in contact with.

There are now 94 confirmed cases of COVID-19 in Quebec, health authorities announced Wednesday afternoon, up from the 74 cases that were confirmed as of Tuesday afternoon.

Of the confirmed cases, 24 are in the Montreal area, 18 in the Eastern Townships, 13 in the Monteregie, 8 in the Laurentians, 8 in the Quebec City region, 6 in the Lanaudiere, 6 in Chaudiere- Appalaches, 3 in the Mauricie and 1 in the Outaouais.

Health authorities said that as of 1 p.m. Wednesday 3,627 Quebecers were awaiting test results; 5,213 tests have come back negative.

Quebec Premier Francois Legault and provincial health authorities are providing Quebecers with an update on the state of COVID-19.

*YOU CAN WATCH THE UPDATE LIVE ABOVE*

Earlier Wednesday, health authorities in Quebec urged people not to wear masks for preventative reasons in order to maintain the province’s supply.

This is a developing story that will be updated.