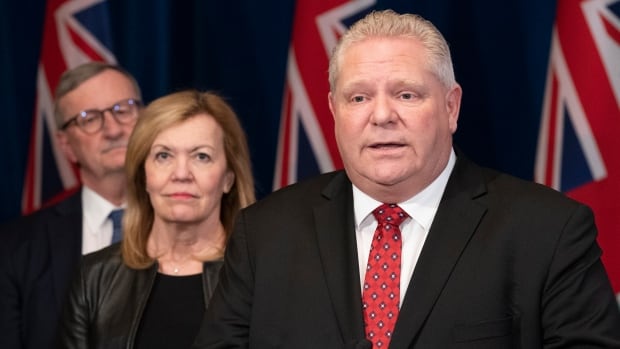 The provincial government is extending the stay-at-home order and all existing public health and workplace safety measures in Toronto, Peel and North Bay-Parry Sound.

York Region, meanwhile, will transition out of the shutdown and back into the province’s COVID-19 response framework, the province announced in a news release Friday afternoon. The region will be in the red level as of 12:01 a.m. on Feb. 22.

“Our government’s number one priority is the safety of all individuals and families, and that’s why we are taking a gradual, cautious approach to returning regions to the Framework,” said Health Minister Christine Elliott in a statement.

“These are difficult but necessary decisions, in order to protect against COVID-19 variants and maintain the progress we have all made together. Until vaccines are widely available, we continue to urge all Ontarians to follow public health advice and measures, and stay home, stay safe, and save lives.”

Cabinet met morning to discuss the matter and an announcement is expected by the time Premier Doug Ford holds his news conference, scheduled for 2 p.m. ET.

The province had said earlier this month that it planned to roll back the order and move Toronto, Peel Region, York Region and North Bay to its tiered pandemic restrictions system next week.

But the top doctors for Toronto and Peel have since asked for that to be delayed until at least March 9 because of the presence of variant strains of the virus in their communities.

Ford hinted Thursday that the province may grant the request made by Toronto and Peel, which logged 376 and 264 more cases of COVID-19 in today’s update from the Ministry of Health. York Region reported another 108 cases.

The province said Friday that in Toronto, Peel and North Bay-Parry Sound, the stay-at-home order will remain in place until at least March 8, citing COVID-19 rates that “still remain too high” and concerns over variants of the virus.

The province also announced Friday that Lambton Public Health (the Sarnia area) will be moving from the Orange-Restrict level to the Red-Control level because of worsening public health trends in the region over the past week. That change also comes into effect on Monday at 12:01 a.m.

Officials say after returning to the framework, regions will be required to stay at their level for at least two weeks, at which time the province will examine whether changes should be made. A region can be moved to a higher level within that window if changes need to be made, the province’s news release says.

“While the health indicators have improved enough to allow us to return an additional region to the framework, we are not yet at the point where we can safely transition back the remainder of the province,” said Dr. David Williams, Chief Medical Officer of Health, in a statement. “Everyone is strongly advised to continue staying at home, avoid social gatherings, only travel between regions for essential purposes, and limit close contacts to your household or those you live with regardless of which level of the framework you are in.”

Other public health units that saw double-digit increases of COVID-19 cases Friday were:

Ontario’s lab network completed 65,372 tests for SARS-CoV-2, the virus that causes COVID-19, and recorded a test positivity rate of 2.1 per cent, the lowest since Oct. 16 of last year.

The number of people with COVID-19 in hospitals dropped to 689, down from 758 the day before, and the fewest since early December. Of those, 269 were being treated in intensive care and 190 required a ventilator to breathe, according to the Ministry of Health.

The province administered 16,967 doses of vaccines yesterday, the most on any single day since the immunization campaign began. A total of 217,715 people in Ontario have received both doses of a vaccine and are fully immunized.

Meanwhile, Ontario residents aged 80 and older will be contacted about vaccination appointments in the coming weeks as the province expands its COVID-19 immunization efforts.

Provincial officials say primary physicians may begin contacting seniors in that age group while an online booking system and service desk for appointments are still in development.

Most appointments for those residents will begin in March but officials say some public health units may move ahead sooner once they complete vaccinations for highest-priority individuals, which include long-term care residents.

The province was to receive close to 157,000 doses of the Pfizer-BioNTech vaccine this week and says it expects its weekly supply from the company to range between 173,000 and 186,000 doses through the end of March.

Officials say doses of the Moderna vaccine for next week will be lower than expected, at 47,400, but supply is expected to increase in March.

The supply increase will coincide with an expected expansion of Ontario’s vaccine rollout to target the 80 and older group, seniors in congregate care and all Indigenous adults.

Inspectors to visit some small businesses

Also this morning, Labour Minister Monte McNaughton said he is sending inspectors to visit small businesses reopening this month in an effort to boost compliance with pandemic orders.

McNaughton said initial visits will focus on education about safety rules and inspectors will take a “firmer approach” on followup visits.

He said small businesses have felt the brunt of the pandemic but many don’t have the resources to quickly adapt to new safety protocols.

Business types included in the initiative that begins next week include retail stores, gyms and personal services in regions reopening in grey, red and orange zones under the provincial restrictions framework.

Inspectors will focus on businesses in Wellington-Dufferin Guelph, Durham and eastern Ontario, where businesses reopened this week with varying levels of restrictions.

The ministry said a webinar and an information hotline will also be available as business owners adapt to new rules.

The announcement comes as the federal government said it is expanding coverage under the Canada Recovery Sickness Benefit to two to four weeks.