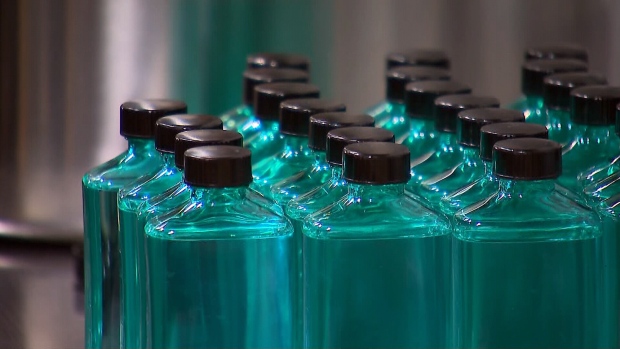 TORONTO — With customers having retreated to their homes in the wake of COVID-19, distilleries across North America are finding a new way to serve the public: by using their facilities and high-proof alcohol to make hand sanitizer.

There have been reports from all over the country of distilleries putting their equipment to use in order to help out front-line workers and address shortages in hand sanitizer within their communities.

In Ontario alone, there are distilleries in Windsor, Perth, Toronto and other places across the province contributing to the cause.

The Corby Spirit and Wine Ltd. distillery in Walkerville, which has been in operation for more than 160 years, added hand sanitizer to its production line on March 19, and is donating the product.

Garrett Kean, the assistant production manager at Top Shelf Distillers in Perth, said they are doing their best to follow the specific formula dictated by the World Health Organization to make sure their hand sanitizer is up to snuff. The WHO formula calls for a mixture of glycerol, hydrogen peroxide, distilled water, and either ethanol or isopropyl alcohol.

Not all of the ingredients are easy to come by — Top Shelf had to use coconut oil in place of glycerol in their first batch.

They started a fundraiser in order to help them acquire supplies and meet their goal of delivering to front-line workers first, promising that those who donate will also receive a personal bottle of hand sanitizer once health care workers have received what they need.

In Toronto, the Spirit of York distillery is focusing its new line of production on delivering to local residents in need. Specifically, they are offering their hand sanitizer for free to those over 65 years of age and those who can’t afford it.

Anyone who is able to pay will only be charged $3 a bottle.

They said they were inspired by stories of people hoarding hand sanitizer or Lysol wipes in the hopes of selling them at a higher price and turning a profit.

“We decided to go the other way,” said Gerry Guitor, the founder of Spirit of York.

“Our mandate is always giving back to the community … its part of our core values, so when we saw what was happening we decided we needed to something.”

Ethanol that they normally use to make gin and vodka is now being used entirely on their hand sanitizer production.

Geoff Dillon, the founder of Dillon’s Small Batch Distillers, which is housed in a small town just west of St. Catharines, said that his team was inspired last week while they were “sitting around … kind of depressed, watching the news.”

They realized that they “had a building full of alcohol,” he told CTV News Channel on Sunday.

“We thought we could do more (to help).”

They started out making hand sanitizer, but switched to a spray-on disinfectant when they ran out of some of the supplies they needed.

They’ve partnered with local companies who are going to be providing delivery vehicles, and then they hope to get their product out “to essential workers who need it.”

In Nova Scotia, the Ironworks Distillery in Lunenburg has shifted some of their production into hand sanitizer, although they are still open for business for online orders of spirits.

Their bottles of hand sanitizer are being sold for $5 each, with the proceeds all going to the Lunenberg Fisherman’s Memorial Hospital Auxiliary.

In Saskatchewan, two Saskatoon distilleries are manufacturing and distributing personal hand sanitizer to all emergency and frontline workers in Saskatoon free of charge.

Stumbletown Distillery partnered with Lucky Bastard Distillery to produce the essential product. They were approached by Saskatchewan Blue Cross after word got out of their efforts, who agreed to cover the labelling costs for the sanitizer. Paramedics picked up an order last week.

On the west coast is another partnership, but this time, between two companies that normally make very different products.

Victoria Distillers is working with a local cosmetics business called Nezza Naturals in order to figure out how to convert leftover alcoholic byproduct from the distilling process into hand sanitizer. The distillery provides the alcohol, and Nezza Naturals blends it in with the other ingredients necessary to create the hand sanitizer.

Currently, their focus is to serve their local community and essential services staff.

More and more distilleries have been signing up for the job since the first stories of distilleries putting their equipment to use started coming out of the U.S. in mid-March.

One of the first distilleries to make public their new quest was Eight Oaks Farm Distillery in Pennsylvania, which first started filling bottles with their new sanitizer on March 16.

Owners and employees from distilleries involved in the aid process say they’ve had an overwhelming response from their local and international communities. Many have applauded the distilleries for stepping up in the wake of hand sanitizer shortages across the continent.

“There’s been a lot of tears shed here by the employees we have left,” said Dillon. “It’s been unbelievable. We have so many thousands of emails and voice mails and messages. We’re just trying to stay above water right now and get as much out as we can.”