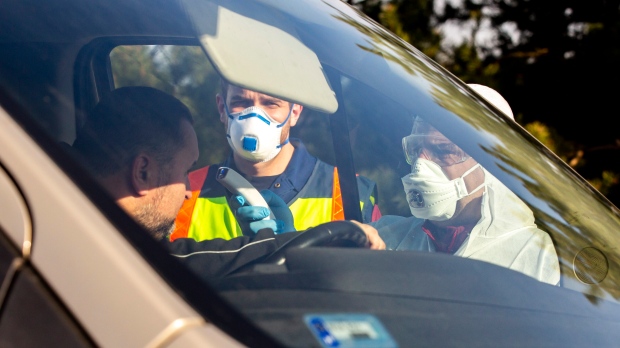 VANCOUVER — Drive-thru clinics testing people for COVID-19 in South Korea could serve as a model for Canada, where the spread of the virus is comparatively limited but increasing to the point that such early interventions could be considered, an epidemiologist says.

Stephen Hoption Cann of the University of British Columbia’s school of population and public health said drive-thrus in the city of Goyang allow people to stay in their cars as staff in protective clothing take samples from their throats and noses.

The low-threshold testing, which is being done even if someone has a sore throat without a fever or cough, has reduced spread of the novel coronavirus and saved time waiting on test results because samples don’t have to be sent elsewhere for analysis, he said.

“If it’s positive they get a phone call, if it’s negative they’ll just get a text message,” Hoption Cann said, adding people who are diagnosed with the virus are placed in isolation before they can infect others.

The United Kingdom is also opening virus-testing drive-thrus, he said.

An outbreak of MERS — Middle East Respiratory Syndrome — in South Korean hospitals in 2015 gave that country a preparedness advantage to take more aggressive steps with the current virus, Hoption-Cann said of the country’s actions compared with Italy and Iran, where infections have quickly spread since the virus originated in China last December.

“When this really took off in South Korea they got their resources together and developed, I think, an efficient plan to catch people early.”

A lockdown of about 60 million people in Italy has led to widespread infection and over 800 deaths, but aggressive testing has worked in South Korea, where about 67 people have died, he said, adding the latter country has also developed an app to alert users if they’re close to a high-risk area from where COVID-19 is known to have spread.

Compared with the SARS virus, which originated in China in late 2002 and killed an estimated 774 people worldwide after spreading to an estimated 17 countries, COVID-19’s further reach and higher death toll has required swifter action, Hoption Cann said.

He suggested use of technology before the respiratory disease spreads further in Canada be considered.

“When you’ve got a lot of community spread going on it becomes difficult to predict where the next new infections are coming from and then you’ll probably start to see more severe things happening.”

Gatherings that draw a large number of people, including sporting and cultural events, have been cancelled around the world to prevent the spread of the virus from close contact as “social distancing” becomes the norm and people make a conscious effort to reduce close contact such as not shaking hands or meeting in large groups.

The Public Health Agency of Canada says the risk to the general population is low. However, for some, including Canadians aged 65 and over, those with compromised immune systems and those with pre-existing conditions, the illness can be much more severe. Among the Canadians diagnosed with the illness so far, fewer than 15 per cent have required hospitalization.

This report by The Canadian Press was first published March 13, 2020.