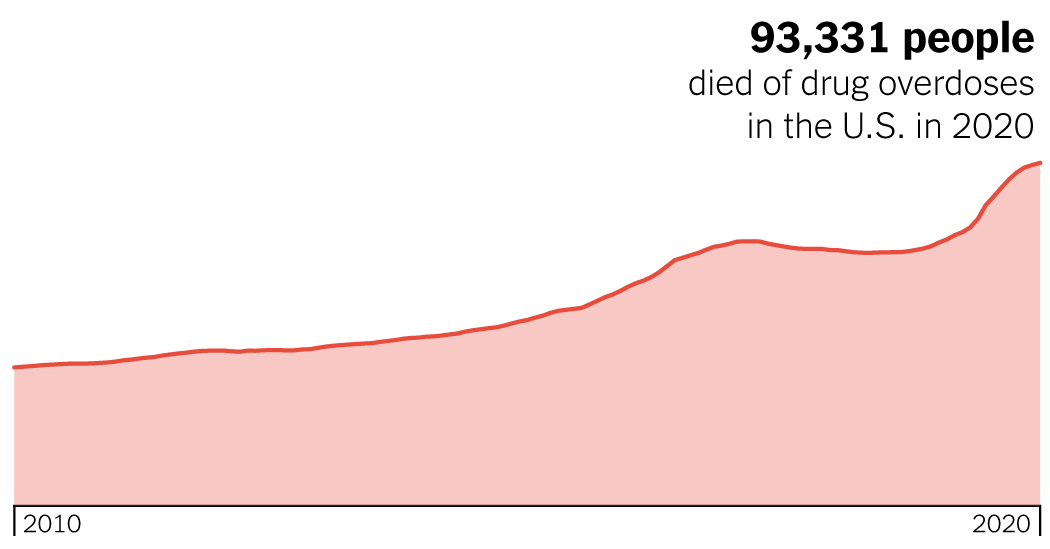 As Covid raged, so did the country’s other epidemic.

Drug overdose deaths rose nearly 30 percent in 2020 to a record 93,000, according to preliminary statistics released Wednesday by the Centers for Disease Control and Prevention. The deaths rose in every state but two, South Dakota and New Hampshire, with pronounced increases in the South and West.


Drug overdose deaths in the U.S.

The death toll from Covid-19 surpassed 375,000 last year, the largest American mortality event in a century, but drug deaths were experienced disproportionately among the young. In total, the 93,000 deaths cost Americans about 3.5 million years of life, according to a New York Times analysis. By comparison, coronavirus deaths in 2020 were responsible for about 5.5 million years of life.

The pandemic itself undoubtedly contributed to the surge in overdose deaths, with disruption to outreach and treatment facilities and increased social isolation. Overdose deaths reached a peak nationally in the spring of 2020, in the midst of the pandemic’s most severe period of shutdowns and economic contraction. But public health experts said there had been a pre-pandemic pattern of escalating deaths, as fentanyls became more entrenched in the nation’s drug supply, replacing heroin in many cities and finding their way into other drugs like meth.

After decades of uninterrupted increases, overdose deaths dipped slightly in 2018. But they resumed their upward course in 2019, and drug deaths were rising in the early months of 2020, even before Covid arrived.

Source: Centers for Disease Control and Prevention·Note: Monthly drug deaths are based on provisional data and may not add up to the annual total.

“We went into Covid with this issue,” said Regina LaBelle, the acting director of the Office of National Drug Control Policy. “Rates of overdose death were going up; they were on the upswing. Certainly, Covid didn’t help and likely exacerbated things, but we were seeing an increase before.”

President Biden nominated a permanent director for the post, sometimes called the drug czar, on Tuesday. The nominee, Dr. Rahul Gupta, a physician and the chief medical and health officer for the March of Dimes, was the former commissioner of public health in West Virginia, a state with one of the sharpest rates of increase in drug deaths last year.

José Benitez, the executive director of Prevention Point Philadelphia, said the continuing mixing of heroin and other drugs with fentanyls had driven up the overdose rate there. But he also noted the effects of the pandemic. His group, which provides services to people who use drugs, saw appointments drop by about 20 percent. Some of their funding was diverted to support Covid services. He also said that Covid public health warnings about social distancing ran counter to the advice given to opioid users. If they are going to use drugs, they’re encouraged to use them around other people, so someone can revive them if they overdose. “The messages were mixed at best,” he said.

Mr. Benitez said the last year had been hard on his staff. It was not uncommon for two clients to die every week. “I was a social worker during the AIDS era,” he said. “This is, in lots of ways, almost a repeat of that.”

The C.D.C. will provide final estimates in a few months (overdose death investigations depend on toxicology reports and other testing that take time). No region was spared from the increased death toll. In the Northeast and Midwest, where the opioid epidemic was most acute in earlier phases, deaths continued to rise. But the biggest increases were in the South and the West, regions that had been less afflicted.

Rising deaths in the West, in particular, suggest a possible new phase in the epidemic. The national rise in deaths in recent years has been attributed in part to the introduction of fentanyls, which are easier to manufacture and ship than traditional heroin. Fentanyls began regularly appearing in the East Coast’s heroin supply in the last seven years, where they were easy to mix with the most common type of heroin, also a white powder. Overdoses of fentanyls, with their high yet variable potency, tend to be more common than overdoses of traditional heroin.

In the West, where most heroin is sold as a stickier substance known as black tar, fentanyls had been less widespread. Researchers examining the drug supply in the West say they are seeing more fentanyls sold as counterfeit pills, or sold alone as an injectable drug. An increase in overdose deaths involving both meth and fentanyls suggests fentanyls have begun penetrating the stimulant supply, too.

It appears that the pandemic may have briefly interrupted the flow of fentanyls from China into the United States. Chad Sabora, the executive director of the Missouri Network for Opiate Reform and Recovery, and a consultant to the government, said the drug supply in St. Louis was altered for more than a month. “Then, a huge influx,” he said. “People’s tolerance had gone down, and boom.”

White Americans were hit particularly hard in the early years of the opioid epidemic, but in recent years deaths have been growing fast in nonwhite populations. In 2020, overdose deaths grew faster in Black and Hispanic populations than in white ones.

The trend may reflect the growing reach of fentanyls, which are now often found mixed with stimulants like cocaine and meth. They are reaching groups that were less likely to become addicted to prescription painkillers earlier in the epidemic. The stresses of the Covid pandemic have also affected Black, Latino and Native Americans disproportionately, with the potential to affect patterns of drug use.

Politicians, public health officials and clinicians have been battling the opioid epidemic for years. In 2018, Congress passed a package of bills meant to reduce the death toll by limiting overuse of prescription drugs and improving access to drug addiction treatment. And early this year, Congress allocated an additional $1.5 billion to fight the epidemic.

The pandemic brought some changes in addiction policy that may have saved lives. Temporary changes have made it easier for people enrolled in methadone treatment to take doses home with them, instead of requiring them to visit a clinic each day. Ms. LaBelle said more people in drug treatment had stayed enrolled as a result. Regulators also made it easier for people to seek medical care through telemedicine, another policy that may be extended beyond the Covid emergency. For the first time, federal funds (from the recent stimulus bill) can be used to buy needles and syringes for exchange programs, and to purchase rapid fentanyl test strips, which can be used to check whether drugs contain fentanyl.

These new initiatives, and the substantial new funding to fight the epidemic, could help, several scholars said. But Ms. LaBelle cautioned that the improvements may come slowly. “In a year, I hope some of the regulatory revisions have been extended,” she said. “I think it’s more five to 10 years when we’ll start seeing more of the fruit of our labors.”