You Are Here Home Health News Drug for painful bladder condition may damage retina in some patients, doctors warn 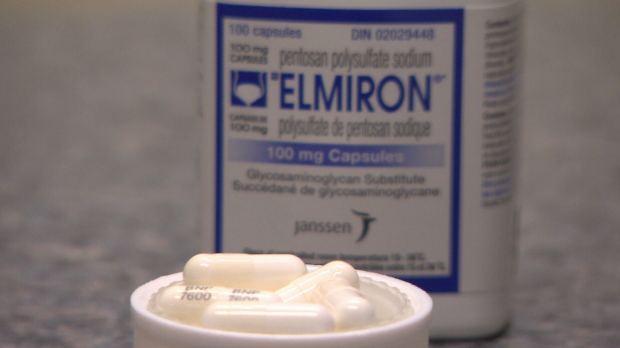 TORONTO — Imagine having a painful bladder disorder for which there is only one oral drug available — that isn’t even always effective for everyone who takes it — and discovering that it may be toxic enough to also severely damage your eyes.

This is the scenario Carrie Gagnon is grappling with. Gagnon has been taking Elmiron, known generically as pentosan polysulfate sodium, for 15 years to mitigate the debilitating pain she was experiencing from interstitial cystitis, or painful bladder syndrome.

“Basically, I was going to the emergency once a week. Felt like knives stabbing me up my urethra, horrible abdominal pain would make me sick to my stomach … and it just wasn’t going away,” Gagnon told CTV News.

She began taking Elmiron for the pain and after three or four months on the medication, found that the severity of her symptoms had drastically improved. But she noticed her night vision and general eyesight was getting increasingly worse in recent years. Night driving was becoming more challenging and little words on television were becoming harder to read.

Interstitial cystitis affects hundreds of thousands of Canadians — mostly women — and there is no cure. Patients suffering from the condition may have constant bladder pain that starts as soon as the bladder begins to fill. They feel a frequent and urgent need to urinate that can be significantly disabling — in severe cases, it could mean sleepless nights and as many as 40 to 60 trips a day to the washroom. Relief — if it comes — may last just minutes after the bladder is empty. For many, it is a chronic condition that can last years.

“It’s like having a bacterial infection of the bladder. Yet, there’s no bacterial organisms that’s causing it. And antibiotics won’t make it go away,” said Dr. Curtis Nickel, an urology professor at Queen’s University and the Canada Research Chair in urologic pain and inflammation.

“It’s disabling as far as a patient trying to have meaningful employment and even a good social or sexual life.”

There is only one oral medication approved by Health Canada and the FDA for interstitial cystitis: Elmiron. It has been prescribed for decades, but it is not always effective for the condition and only works for some patients, like Gagnon.

Then two years ago, eye doctors began noticing vision problems in patients who had been on the medication over a long period of time. One study on the apparent side-effect found that about 25 per cent of those taking Elmiron for five years or longer had quietly developed significant damage to the retina, the part of the eye that contains light-sensitive cells that help us see.

According to Dr. Robin Vora, chair of ophthalmology at Kaiser Permanente in Oakland, Calif., and one of the study’s co-authors, the eye problems fall into a wide range — from just blurry vision, to difficulty reading, to having difficulty adjusting and seeing in different lighting conditions. These conditions were initially attributed to other, more common eye diseases, such as age-related macular degeneration, the leading cause of vision loss in older people.

When asked to respond, Janssen, the Johnson & Johnson pharmaceutical company that makes the drug, shared the Canadian Elmiron product monograph, which describes the safety, effectiveness and labelling of the drug and its active ingredients.

Health Canada updated its information on Elmiron late last year, advising patients on Elmiron to get regular eye exams and to discontinue the drug if vision problems develop. A second medical alert went out to Canadian doctors who prescribe this drug for bladder issues.

“The problem is that patients remain on this medicine and what we found in our research, the longer they are on it the more likely they are to have damage to the retina. It’s imperative for patients hear this message and go see an ophthalmologist,” Vora said, urging patients to contact the doctor who prescribed the drug to let them know about this potential side-effect.

Instances discovered among their own patients prompted Vora and his colleagues to go through Kaiser’s database of more than four million patients. They found 140 patients who had taken an average of 5,000 Elmiron pills for over a decade and a half and were able to examine 91 of them.

“If there is any damage to the retina it is not fixable so the reason why this is so important is that if you are on this medication you’ve got to go get evaluated because if there are any changes, it is important that you stop taking the medicine,” Vora said. “It’s really important to get the word out.”

What surprised Vora the most was the level of retinal damage in many of the patients they examined.

“At the worst, worst stage this mimics really severe macular degeneration and we were a little bit shocked to see that a medicine could cause this much damage.”

For Nickel, who is also an urologist at Kingston General Hospital and has specialized in bladder pain syndrome, the drug’s potential long-term toxicity to the retina was something he only became aware of in the last year or so.

“At first, I discounted it as just another manifestation of the systemic or other body problems that occur with interstitial cystitis, but with repeated reports from multiple ophthalmology institutions, primarily in the United States, I am convinced that there might be a possible link,” he said, underscoring the importance of patients who are long-term Elmiron users and physicians who prescribe the drug be aware of the potential link. He co-authored a brief published earlier this year alerting the medical community of this issue.

Nickel hopes that his alert to doctors across the country will raise awareness and help prepare doctors to discuss it with their patients.

“Most of the literature is not in the urology journals that our members would be reading. It would be in the ophthalmology literature and it’s being discussed at ophthalmology meetings,” he noted. “That’s why it’s important that we have this cross-pollination between disciplines.”

Some of Nickel’s recommendations for physicians and patients include: considering decreasing and stopping the medication altogether and seeing if they still require it; to not start Elmiron until there is more clarity on the potential complications; to see an ophthalmologist if a patient is on the medication, and especially if they are having vision trouble or if they have concerns about future vision problems while being on Elmiron.

In the meantime, Gagnon has stopped taking the medication, unwilling to risk her vision for a drug under scrutiny.

“My biggest fear is going blind… my vision going down, not having the freedom to drive or drive at night – that would take away my freedom…that is scary,” said Gagnon.